Members of the Dadabhai Travel team, winners of the tournament, with the dignitaries during the presentation ceremony.

Dadabhai Travel held their nerve to beat Sharjah Police 2-1 in the penalty shootout in the tense final of the inaugural edition of the Ramadam Hockey 5s at the Sharjah Sports Council Ground.

The thrilling final between Dadabhai Travel and Sharjah Police teams was swinging either way till the end, before the former took the top honours.

The tournament was organised by the UAE Hockey Federation under the auspices of the General Authority of Sports and the UAE National Olympic Committee. 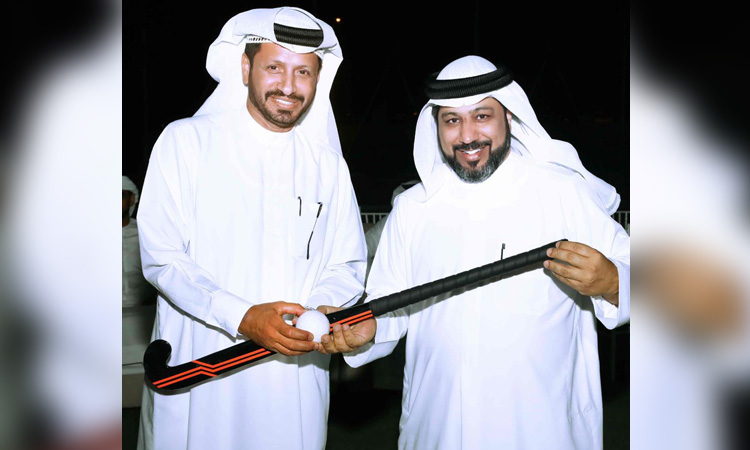 “A tournament with such a large number of participants, in its first edition, exemplifies the efforts of the organising team.

“After such a good start, we have faith in the efforts of the UAE Hockey Federation team in taking a qualitative leap to promote the game across the country and we wish them continued success,” he added.

The first edition of the Ramadan Hockey Tournament, offering a valuable cash prize, attracted 16 teams, which were divided into four groups.

The final was held in the presence of a large turnout of fans.

The UAE Hockey Federaion chief said: The success of the inaugural edition has presented us with several challenges in order to continue working, holding competitions, and expanding the game.

“We will try our best to attract youngsters to the game in order to include the largest number of players possible and establish a strong team, and there is a new strategy for the new season.

“We are in talks with two international academies, to gain from their experiences.

“Having a solid national team capable of competing on the international stage is our target for the future of hockey,” he added.

“The UAE Hockey Federation is also in talks with several schools to introduce the game to children.” Earlier, the teams were locked in a 9-9 stalemate at the end of regulation time in a high-intensity clash, but in the shootout, the experienced Dadabhai Travel emerged victorious.

The teams were evenly matched in terms of circle penetrations, ball possession, and shots at goal and were only separated by the Dadabhai Travels’s team’s killer instinct from penalty corners.

“I am very happy with the victory. We did very well and worked hard over the tournament,” said winning team captain Anand Rai.

“Our opponents played well, and it was a tight game. It’s been great learning for us. It is really helping us prepare for the upcoming tournaments. We will be travelling to Muscat next month to play a tournament, “he added.

Mahtab Shafiq, representing Sharjah Police, finished on top of the scoring charts after netting 21 goals in the tournament.

He was locked in a battle of top scorers with Ali Raza of Dadabhai Travel, but his goal in the dying minutes of the final earned him the award.

The matches were supervised by professional umpires like Abid Naqi, from Pakistan, and Hany.

Members of the technical committee Raza Abidi, Suwaidi, and Usama were also recognized for their contributions to the tournament’s success.Meanwhile, the UAE Hockey Federation has come forward to extend full support to two players who got injured on the final day of the competition. Muhammad Rishad of UTSC and Muhammad Haris of the Sharjah Police team suffered injuries during their matches respectively and underwent treatment at Al Qasimi Hospital.

The federation has decided to bear the treatment cost and send money to one of the injured players’ family in India, as he is the sole breadwinner for his family.