Dawid Malan celebrates reaching his half century at Trent Bridge on Sunday. Reuters

Dawid Malan top-scored with 77 in a total of 215-7 as England attempted to avoid a Twenty20 series whitewash against India at Trent Bridge on Sunday.

India, 2-0 up in the three-match contest after wins at Southampton and Edgbaston, looked as if they might restrict England, for whom batting has been an issue this series, to a total of under 200 with recalled leg-spinner Ravi Bishnoi taking an impressive 2-30 from his maximum four overs.

But Liam Livingstone’s unbeaten 42 from 29 balls, plus a 19 off nine from Harry Brook and 11 off three from all-rounder Chris Jordan helped England to their eventual total.

Malan, often criticised for scoring too slowly in an England top-order full of attacking talent, was in aggressive form Sunday during a 39-ball innings featuring six fours and five sixes.

The 34-year-old left-hander did have a moment of good luck when dropped on just four as Harshal Patel failed to hold a return catch. 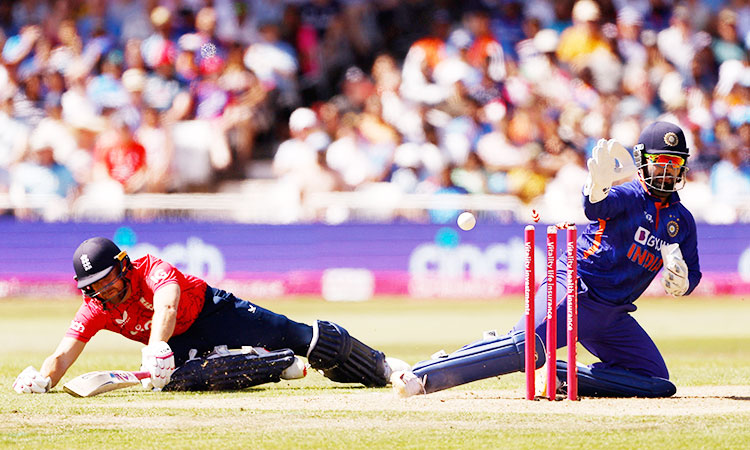 Dawid Malan makes his ground as Rishabh Pant attempts to run him out. Reuters

Both teams made changes from India’s series-clinching 49-run win across the Midlands in Birmingham on Saturday.

India, ahead of next week’s three-match one-day international series against England, rested their premier new-ball duo of Bhuvneshwar Kumar and Jasprit Bumrah, with their places taken by Avesh Khan and Umran Malik coming in.

England’s Jos Buttler, in his first series a white-ball skipper since succeeding retired 50-over World Cup-winning captain Eoin Morgan won the toss and batted on what looked a typically good Trent Bridge.

Buttler, opening alongside Jason Roy, used Malik’s express speed against him, driving through two fours through the offside before unfurling a six over midwicket.

Avesh, however, struck when Buttler played on to a well-directed cutter.

Roy fell for 27, caught behind after slashing at Malik while a befuddled Salt was bowled by Harshal’s cleverly disguised slower ball.

Malan brought up a 30-ball fifty with a straight drive off Malik before then thrashing the fast bowler high over extra cover for six. But he fell in Bishnoi’s last over, skying a catch to wicketkeeper Rishabh Pant.