Babar Azam plays a shot and celebrates after scoring a century during the second day of the first Test match at the Galle Cricket Stadium on Sunday. AFP

Pakistan skipper Babar Azam made a defiant 119 to thwart a Sri Lankan spin attack led by Prabath Jayasuriya on day two of an evenly poised first Test on Sunday.

Azam single-handedly took the tourists to just four runs short of Sri Lanka’s 222 as he put on a 70-run tenth-wicket stand with Naseem Shah, who made five not out from 52 balls, in Galle.

Sri Lanka were 36 for one at stumps after skipper Dimuth Karunaratne fell lbw to left-arm spinner Mohammad Nawaz, for 16.

Oshada Fernando, on 17, and nightwatchman Kasun Rajitha, on three, were batting when bad light stopped play for the day with the hosts leading by 40 runs in their second innings. Agha Salman fields during the first day of the first Test match at the Galle Cricket Stadium. AFP

Jayasuriya was Sri Lanka’s go-to spinner as he claimed his third successive haul of five wickets or more to rattle the opposition batting, which slumped to 85-7 before lunch and then 148-9 in the second session. But Azam kept up the fight and reached his seventh Test century with a four and single off mystery spinner Maheesh Theekshana as he jumped to celebrate.

“I have not seen an innings like that for a long time,” batting coach Mohammed Yousuf said of Azam’s knock. “To be under so much pressure and the ball turning a lot, he played with a lot of patience and took the tailenders along.

“A knock with so much patience, on a difficult track and especially the way he handled Jayasuriya. I am speechless.”

Theekshana, who took two wickets, finally got the star batsman trapped lbw to end the Pakistan innings on 218 in the final session.

Azam got help from the lower-order batsmen including Yasir Shah (18), Hasan Ali (17) and Naseem, as Pakistan managed 133 runs from the final three wickets. 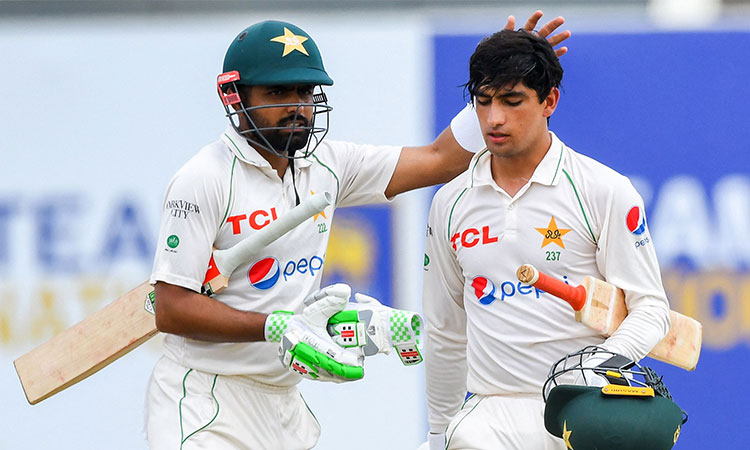 Babar Azam (L) and Naseem Shah walk back to the pavilion for a tea break. AFP

Azam, who began the day on one, shielded number 11 Naseem by facing most of the balls in a defiant show of batting. The 27-year-old, who tops the one-day and Twenty20 world batting rankings and is placed fourth in Tests, also crossed the milestone of 10,000 international runs across three formats.

Taste of own medicine

For Sri Lanka, it was a taste of their own medicine after they had fought back from 133-8 on day one, when Pakistan left-arm quick Shaheen Shah Afridi took four wickets.

Sri Lanka coach Chris Silverwood said the game was “evenly poised.” “Both teams have showed good signs and I am sure both at certain points would be frustrated,” he said. “Every run tomorrow is gold dust really,” he added.

“This wicket going to start turning more and more as the game goes on, so every run that will get us in front is very important. It’s about smart and sensible cricket.”

Pakistan resumed the day on 24 for two when play started 30 minutes late because of rain and Azhar Ali could only survive three balls before he was trapped lbw by Jayasuriya.

Debutant Salman Ali Agha’s stay lasted just 15 balls before he was out leg before to another sliding delivery from Jayasuriya having scored five.

Jayasuriya, 30, then struck on successive deliveries to remove Nawaz and Shaheen Shah Afridi before Yasir survived the hat-trick ball.

Jayasuriya, who took 12 wickets on debut in a series-levelling Test win over Australia last week at the same venue, six in each innings, became the first Sri Lankan bowler and eighth overall to claim three five-wicket hauls in his first two Tests.