Bert Van Marwijk and Abdulaziz Haikal during a press conference on Wednesday. Photo By Haitham Elkhatim

A depleted UAE will look to boost their chances of qualification for the 2022 Qatar World Cup with a victory over Syria in their Asian World Cup qualifying match on Thursday.

UAE will be missing the services of the ace players like strikers Ali Mabkhout, Fabio de Lima, Sebastian Tagliabue and right back Bandar Al Ahbabi.

Mabkhout and Lima are nursing their injuries while Bandar is serving a ban and Tagliabue is returning from a long sickness so his participation remains doubtful.

“We are missing our key players but I have a very young and energetic squad at my disposal. So we will look to exploit the available resources instead of lamenting on what we don’t have. We will try to win the match and return with three points to consolidate our position for the third placed finish,” said the UAE coach Bert Van Marwijk. 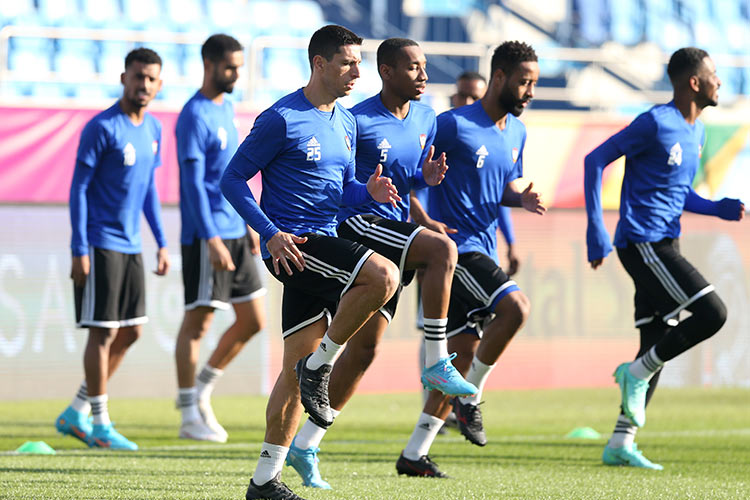 The UAE are at the third spot in the their group with six points from as many games after procuring one win, three draws and two losses.

The UAE are trailing leaders Iran and South Korea, who are on the second spot, but have managed to keep their hopes alive for the third-best finisher in the group.

“I have trust in my players and I am backing them to give them confidence for the match.

Everybody knows all the games are important but this is an extremely important match.

“Everybody knows we are at this moment in the best position for third-place finish. So we will fight for the three points. And, if we win this game, then the situation is more positive for us,” he added.

Van Marwijk, who masterminded the Saudi Arabia’s qualification for the Russia World Cup in 2018 and drove his native The Netherlands to final of 2010 World Cup in South Africa, had conceded that the hopes for a direct qualification is over but they would look to take an alternate route through a third-place finish.

Twelve teams were divided into two groups of six each. The top two finishers from each group will directly book their berth in the 2022 World Cup finals.

The third–placed finishers from both the groups will meet in a knockout game and the winner will advance to the continental play-offs. The best third-placed team from each continent will vie for the remaining berths after going through a grueling round of a series of play-offs.

However Van Marwijk also said stressed playing at home is always an advantage.

“This is a very nice stadium and very good turf. Playing at home is always good as you know the conditions well and fans are there to cheer the team,” he added.

The UAE have a bit of catching-up to do and hope for the other results to go in their favours as well to make their second appearance in the showpiece event after almost three decades.

Iran have 16 points with South Korea two points adrift in the second spot, eight ahead of the UAE. Only the top two are guaranteed automatic qualification at the World Cup.

If the UAE fail to beat Syria in Dubai then South Korea will secure a 10th consecutive berth provided they defeat Lebanon. Lebanon have collected just five points from six games.

But the UAE captain Abdulaziz Haikal said they are confident of winning the match.

“We played Syria in the first leg in Jordan and then faced them in Arab Cup in Qatar.

“Every match is different and it is a new beginning. So we will not think about the past result and focus on the current match,” said the captain.

The UAE and Syria shared the spoils in the first leg. In the next match at the Arab Cup, the UAE defeated Syria 2-1. The host will be taking some positive from their last match against Syria.

The UAE had spurned a good chance to take early advantage and were held by Iraq, Syria and Lebanon on the home turf in the beginning of the third round. Their campaign has been marred by quite a few injuries in important games at home. They had missed the services Waleed Abbas, who has returned to the fold after serving the suspension.

Walid said that the upcoming the UAE  match against Syria is one of the important clashes, especially with the competition entering an advanced stage.

“We must make every possible effort to achieve a positive result against the Syrian national team. There is no room for complacency or complacency.

“We know what is required of us to achieve, and we will strive to reach our goal, no matter what the effort, sweat and fatigue may cost us during the match,” said Waleed.