Belgrade Tower is illuminated with a message reading “Nole” in support Novak Djokovic in Belgrade. Reuters

Novak Djokovic was heading home to Serbia on Monday after his deportation from Australia over its required COVID-19 vaccination ended the No. 1-ranked men’s tennis player’s hopes of defending his Australian Open title.

An Emirates plane carrying him from Australia landed in Dubai early on Monday, and Djokovic was later seen on board a plane due to land in the Serbian capital of Belgrade at 12:10 CET.

His lawyers had argued in an Australian court on Sunday that he should be allowed to stay in the country and compete in the tournament under a medical exemption due to a coronavirus infection last month.

Djokovic back in immigration detention in Australia

Djokovic has won nine Australian Open titles, including three in a row, and a total of 20 Grand Slam singles trophies, tied with rivals Roger Federer and Rafael Nadal for the most in the history of men’s tennis. Federer is not playing while recovering from injury, and Nadal is the only former Australian Open men’s champion in the tournament that began Monday.

Djokovic’s visa was initially canceled on Jan. 6 by a border official who decided he didn’t qualify for a medical exemption from Australia’s rules for unvaccinated visitors. He was exempted from the tournament’s vaccine rules because he had been infected with the virus within the previous six months. 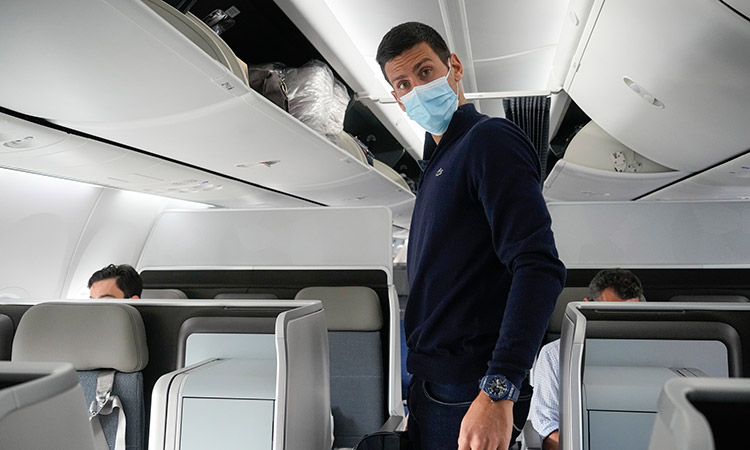 Novak Djokovic prepares to take his seat on a plane to Belgrade, in Dubai, United Arab Emirates, on Monday. AP

Vaccination amid the pandemic was a requirement for anyone at the Australian Open, whether players, their coaches or anyone at the tournament site. More than 95% of all Top 100 men and women in their tours’ respective rankings are vaccinated. At least two men – American Tennys Sandgren and Frenchman Pierre-Hugues Herbert – skipped the first major tournament of the year due to the vaccine requirement.

Djokovic’s attempt to get the medical exemption for not being vaccinated sparked anger in Australia, where strict lockdowns in cities and curbs on international travel have been employed to try to control the spread of the coronavirus since the pandemic began.

But Djokovic has overwhelming support in his native Serbia, and President Aleksandar Vucic said the court hearing in Australia was “a farce with a lot of lies.”

“They think that they humiliated Djokovic with this 10-day harassment, and they actually humiliated themselves. If you said that the one who was not vaccinated has no right to enter, Novak would not come or would be vaccinated,” Vucic told reporters.