Supporters of Novak Djokovic (inset) protest and sing with candles outside a quarantine facility in Melbourne on Thursday. AP

Tennis world number one Novak Djokovic won a temporary reprieve in his deportation from Australia on Thursday, but is set to spend the night in an immigration detention facility as he fights to remain in the country.

The vaccine-sceptic Serbian was detained at Melbourne’s Tullamarine Airport having failed to “provide appropriate evidence” of double vaccination, or a medical exemption needed to enter the country.

Conservative Prime Minister Scott Morrison — under additional pressure from soaring COVID-19 case numbers and the collapse of the once-excellent testing system — defended revoking Djokovic’s visa at the last minute. “Rules are rules and there are no special cases,” he said. 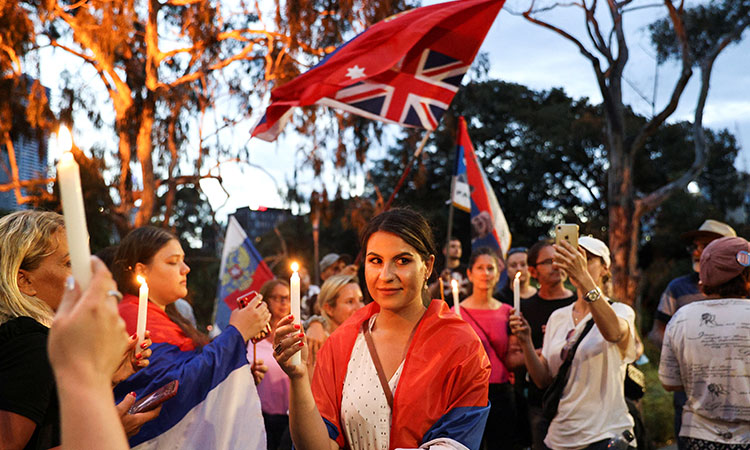 Jelena Stankovic, a supporter of Novak Djokovic, rallies with fellow fans outside the Park Hotel. Reuters

Instead of a champion’s welcome, he was questioned at the airport overnight before having his visa revoked and being transferred to a Melbourne immigration detention facility pending deportation.

After an emergency online court appeal, a judge ordered that the controversial star would not be removed from Australia before Monday, when a final hearing is scheduled to begin.

With scarcely 10 days before the tournament, it remains far from clear that Djokovic will be able to play, even if he wins in court. Judge Anthony Kelly warned that justice would move at its own pace through all necessary appeals. “The tail won’t be wagging the dog here,” he warned the star’s lawyers.

For months there had been speculation about whether Djokovic would play in the Jan.17-30 tournament, given Australia’s rigid border rules.

The 34-year-old has refused to reveal his vaccination status, but has previously voiced opposition to being jabbed. He has contracted COVID-19 at least once.
Then this week a jubilant Djokovic boasted on Instagram that he had scored an unexpected medical exemption to play. 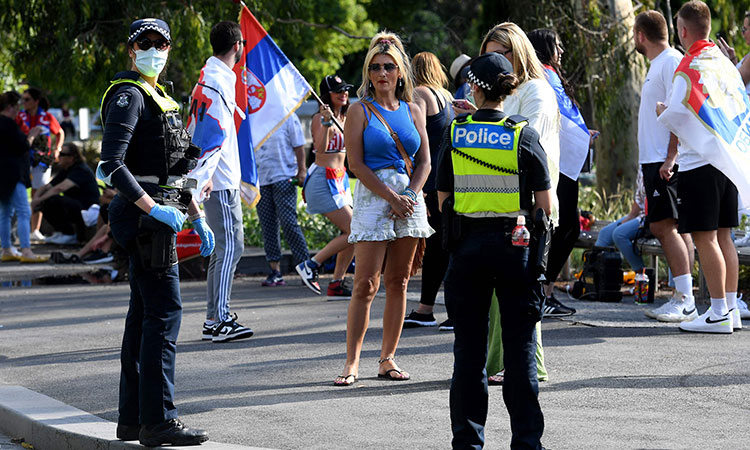 Local members of the Serbian community gather outside the hotel where Novak is reported to be staying in Melbourne. AFP

That move prompted widespread outcry in Australia, where many residents have been unable to travel or welcome family from overseas for the last two years.
Officials did not say exactly what evidence Djokovic failed to present, but medical exemptions must be accompanied by details of a doctor’s consultation and clear reasons for not getting the vaccine.

Rafael Nadal — who like Djokovic and Roger Federer is stuck on a record-equalling 20 Grand Slam wins — said his rival must face the consequences of not being vaccinated.

“He made his own decisions, and everybody is free to take their own decisions, but then there are some consequences,” the Spaniard said. But Djokovic’s treatment prompted fury among his fans and a fiercely worded rebuke from Serbia’s president.

“What is not fair-play is the political witch hunt (being conducted against Novak), by everybody including the Australian Prime Minister pretending that the rules apply to all,” said president Aleksandar Vucic.

Djokovic is now believed to be at the Park Hotel, which the Australian government terms an “Alternative Place of Detention.” As word of his arrival spread, Serbian flag-festooned supporters, anti-vaccine campaigners, refugee advocates and police descended on the already controversial facility.

At least one pro-refugee protester was arrested in chaotic scenes as officers tried to clear the area. Veronica Michich said she was there to show support for Djokovic, whom she described as a beacon of hope for post-war Serbia.

“We see him as a hero. He put Serbia back on the map, because Serbia was always portrayed, we were the aggressive ones, we were the attackers.”
Currently around 32 refugees and asylum seekers are being held at the Park Hotel, after being brought for medical treatment from offshore detention facilities. Detainees cannot leave the hotel and nobody is allowed in or out except staff.

The facility gained notoriety last year when a fire in the building forced refugees and asylum seekers to be evacuated, and maggots were allegedly found in the food.

In October, 21 men reportedly contracted Covid at the facility, which has been the site of regular protests.

Detainee Mehdi Ali told AFP that Djokovic is his favourite tennis player, and that he was saddened by the prospect of the star being held there.

“The media will talk about us more, the whole world probably, which is so sad, just because Djokovic would be here for a few days,” he said.

John Findley, an Australian immigration lawyer, said both the state and Djokovic would have to answer some tough questions in court. “If they see he has provided false information, he must have a chance to answer that,” Findley said. Experts said that charge could bring a three-year ban from applying for another Australian visa.

But Findley also said the visa revocation seemed to have come from “a pile-on from social media” and the government would need to explain the legal bar that Djokovic failed to meet.

Tennis Australia CEO Craig Tiley said Djokovic had no special treatment and just 26 of the approximately 3,000 players and support staff travelling to Australia for the tournament had applied for a vaccine exemption. Only a handful had been successful.

In the Serbian capital Belgrade, Djokovic’s father Srdjan led a demonstration alongside a few hundred others in front of the country’s parliament.

“We are not calling for violence… only for support” for Novak, Srdjan shouted into a megaphone, as the crowd waved Serbian flags and homemade signs, including a banner that read: “They are afraid of the best, stop corona fascism.”