Players during the third round of the Dubai Open Chess Tournament.

Eight players remained with full marks after winning their matches in Monday’s third round of the Dubai Open Chess Tournament, setting up clashes between some of the highest-rated players in the fourth round at the Dubai Chess and Culture Club.

Second-seed GM Arjun Erigaisi and fourth-seed GM R. Praggnanandhaa of India are the only top 10 seeds to remain in the lead with three points each after beating compatriots GM Rithvik Raja and IM Shyaamnikhil P, respectively.

Erigaisi’s victory earned him a couple of rating points, enough to push him among the top 20 players in the world in the live ratings.

The duo are joined in the lead by GM Vladimir Akopian of the US, GM Aleksandar Indjic of Serbia, GM Aram Hakobyan of Armenia, GM Mahammad Muradli of Azerbaijan, GM Rinat Jumabayev of Kazakhstan and GM Sahaj Grover of India.

Tournament top-seed GM Alexandr Predke of Russia could only manage a draw against IM Vignesh N R of India, dropping him half a point behind the leaders along with 18 others.

The top Arab player in the tournament, GM Ahmed Adly of Egypt, settled for a second consecutive draw, this time with France’s Julien Song. The other top Arab players in the event, IM Mohamed Tissir of Morocco, IM Basheer Al Qudaimi of Yemen and IM Husain Aziz of Qatar, were not as fortunate, dropping their respective matches to Indian players GM Harsha Bharathakoti, Prasannaa S and AGM Vishal Choudary B, who is a member of the Dubai Chess Club Academy. 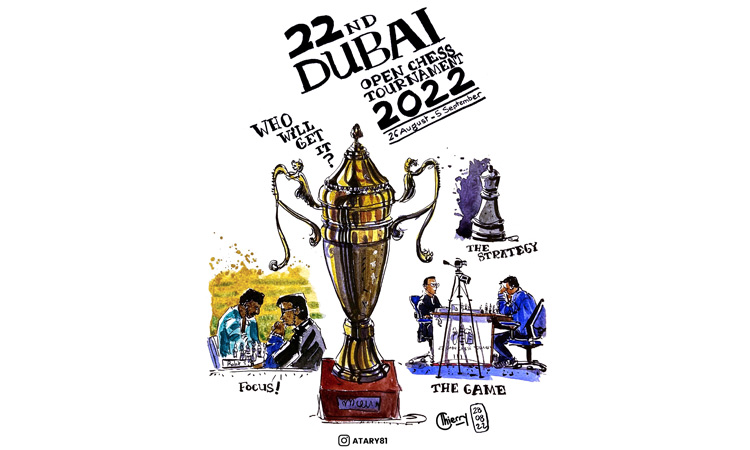 A portrait made by urban sketchers, visited Dubai Chess and Culture Club to sketch and paint portraits of the tournament players.

It is the ninth Dubai Open tournament where Abdulrahim is serving as chief arbiter, and he also has the most number of participation as a tournament official in the event, having officiated in all previous editions of the Dubai Open.