Dean Elgar and Temba Bavuma celebrate after winning the second Test match at the Wanderers stadium in Johannesburg on Thursday. Reuters

South Africa captain Dean Elgar hit a superb 96 not out to guide South Africa to an emphatic seven wicket win in the second Test against India at the Wanderers on Thursday which levels the three-match series at 1-1.

What had been expected to be a tense chase on the fourth day became a comfortable win for the home side after rain delayed the start of play by almost six hours. When play did get under way after tea it was under heavily overcast skies with the floodlights on.

Opener Elgar batted all the way through as South Africa chased down the target of 240 late on the fourth day at the Wanderers and after the first two sessions were lost to rain.

The game appeared finely balanced with both teams sensing a chance of winning ahead of South Africa’s final innings.

The pace bowlers had worried batsmen throughout the low-scoring test and South Africa’s out-of-form batting order needed its highest total of the series to win. But South Africa got there with ease in the end to finish on 243-3, thanks in the main to Elgar’s typically gritty innings.

He batted for more than five hours over two days and took a couple of blows on the body from bouncers, one of which slammed into the grill of his helmet. He kept going and hit the winning runs. 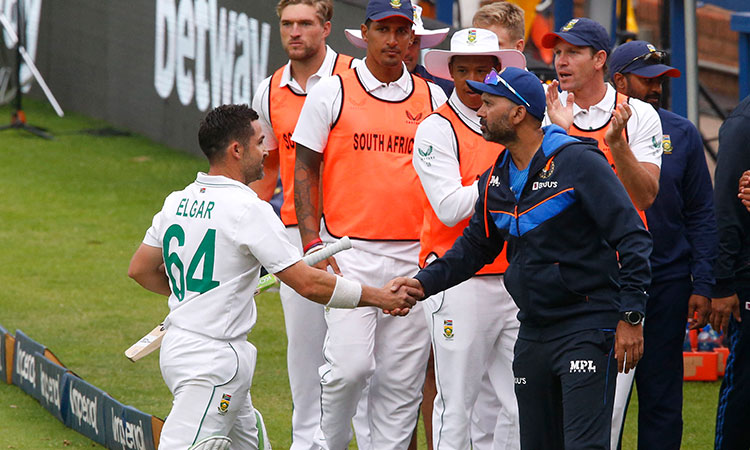 Resuming at 118 for two in pursuit of a target of 240, Elgar and Rassie van der Dussen added 57 runs in the first hour before Van der Dussen was caught behind off Mohammed Shami for 40. The pair had put on 82 for the third wicket.

Temba Bavuma gave a caught and bowled chance to Shardul Thakur before he had scored but then batted solidly to make 23 not out and stay with Elgar until the end. 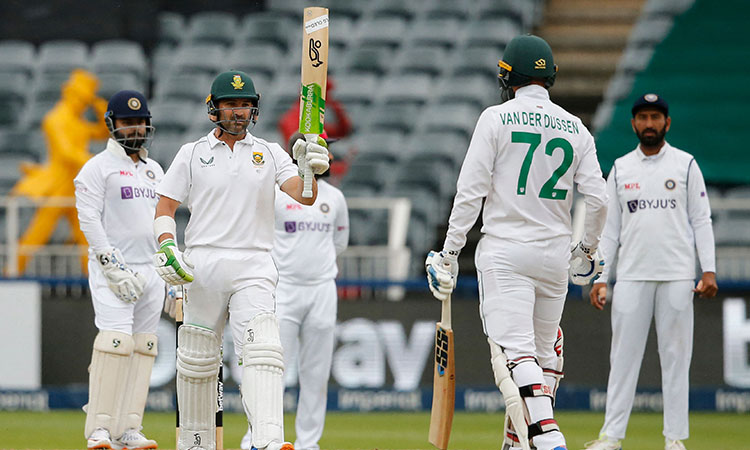 Dean Elgar celebrates after scoring a half-century during the fourth day of the second Test match. AFP

The captain was not quite able to complete his century but hit the winning runs with a flick for four off Ravichandran Ashwin.

Temba Bavuma was 23 not out and he and Elgar took South Africa surging to victory with a flurry of boundaries at the end. Elgar sealed it by hammering one through midwicket and to the boundary.

Rassie van der Dussen had also played an important role with his 40 in an 82-run stand with Elgar after South Africa was 93-2.

The decider in the three-match series will start at Newlands in Cape Town on Tuesday.

Bangladesh eye clean sweep as UAE look to bounce back