Matthew Potts celebrates the wicket of Kane Williamson during the first day of the Test match at Lord’s Cricket Ground in London on Thursday. AP

England debutant Matthew Potts took three wickets as New Zealand collapsed dramatically to 39-6 at lunch on the opening day of the first Test at Lord’s on Thursday.

All of the reigning World Test champions’ top four fell for single figure scores, including captain Kane Williamson — who won the toss — as England made a superb start to life under their new red-ball leadership duo of skipper Ben Stokes and coach Brendon McCullum, the former New Zealand captain. 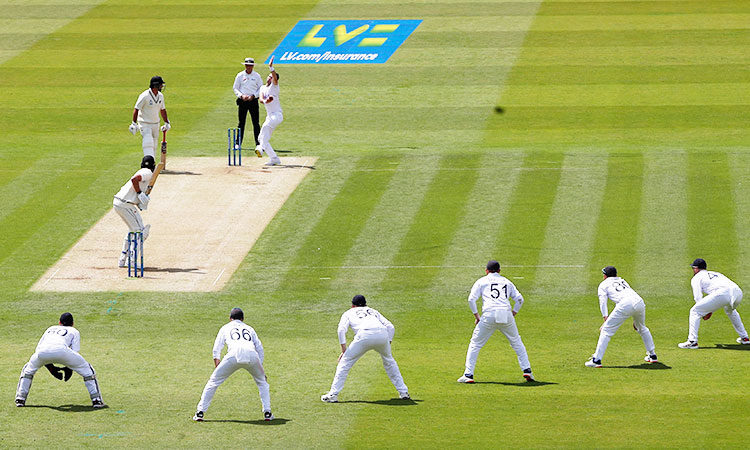 The only downside to the morning’s play for England was that left-arm spinner Jack Leach, before had bowled even one ball, had to leave the field after landing on his head and neck when stopping a boundary.

Leach was later ruled out of the match due to symptoms of concussion, with England summoning uncapped Lancashire leg-spinner Matt Parkinson from Manchester as a concussion substitute.

Anderson and Stuart Broad, England’s two most successful Test bowlers of all time, with 1,177 wickets between them prior to this match, had both been controversially left out of a 1-0 series loss in the Caribbean earlier this year. 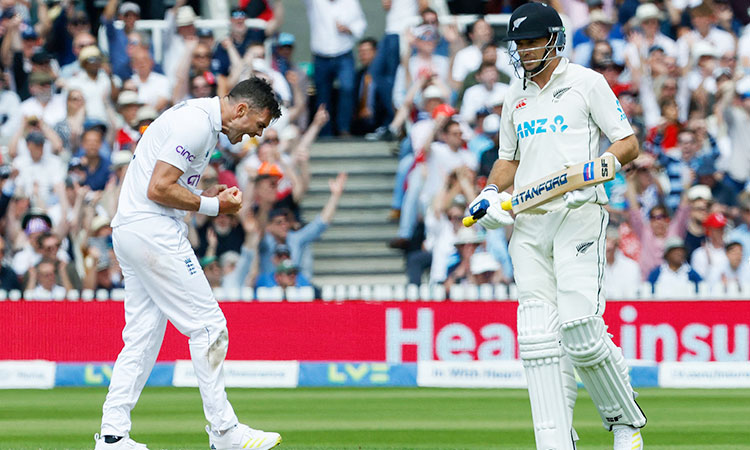 James Anderson (L) celebrates after the dismissal of Tim Southee (R) on the first day at Lord’s Cricket Ground. AFP

But the 39-year-old Anderson was soon back in a familiar groove as he struck twice with the help of Jonny Bairstow.

Will Young lasted just two balls as he edged the 39-year-old Anderson, with third slip Bairstow — who has spent much of his England career as a wicketkeeper — taking a brilliant one-handed diving catch low to his left.

Tom Latham also fell for one to the same duo, with Bairstow holding on at the second attempt. Stokes, renowned as an aggressive all-rounder, stayed true to his attacking instincts by deploying five slips and a gully early on after losing the toss.

New Zealand’s Devon Conway had made a double century at Lord’s in his Test debut last year. But he was powerless to stop the slide on Thursday as he too was caught by Bairstow, off Broad this time, for three.

England’s batting has been a major problem in recent years but Williamson may have been tempted to bat given conditions were likely to become more helpful for spinner Ajaz Patel later in the game.

Potts took his first wicket at this level with only his fifth ball when he had star batsman Williamson, whose longstanding elbow injury meant he missed New Zealand’s previous five Tests, edging low to wicketkeeper Ben Foakes.

England, with just one win in their last 17 Tests, had now reduced New Zealand to a scarcely credible 12 for four.

New Zealand did manage to surpass their 26 all out — the lowest completed Test innings of all time — against England at Auckland in 1955 but they were soon 36 for six, with Potts getting Daryl Mitchell (13) to play on before bowling Tom Blundell (14).