The Australian team looks at Joe Root (R) after he was struck by a delivery from Mitchell Starc on the fourth day in Adelaide on Sunday. AFP

Joe Root fell in the final over of the fourth day on Sunday to leave England in deep trouble at 82 for four chasing a massive 468 to win the second Ashes Test, needing a history-making miracle to avoid slumping 2-0 down in the series.

No team has ever posted such a big score in a fourth innings to win in the history of Test cricket — with the West Indies’ 418 for seven in beating Steve Waugh’s Australia at St John’s in 2003 the highest.

It is an even harder task at the Adelaide Oval, where Australia’s 315 for six to defeat England in 1902 remains the best fourth-innings run chase. England’s problems stem from being bowled out, after a batting collapse, for 236 on Saturday in reply to Australia’s 473 for nine declared.

They reached the close on day four with ailing skipper Root out in the last over of the day, leaving Ben Stokes not out three. England are still 386 runs adrift, facing the near impossible task of batting out three sessions on the final day to salvage a draw with only six wickets remaining and the world’s number one ranked Test batsman back in the pavilion. 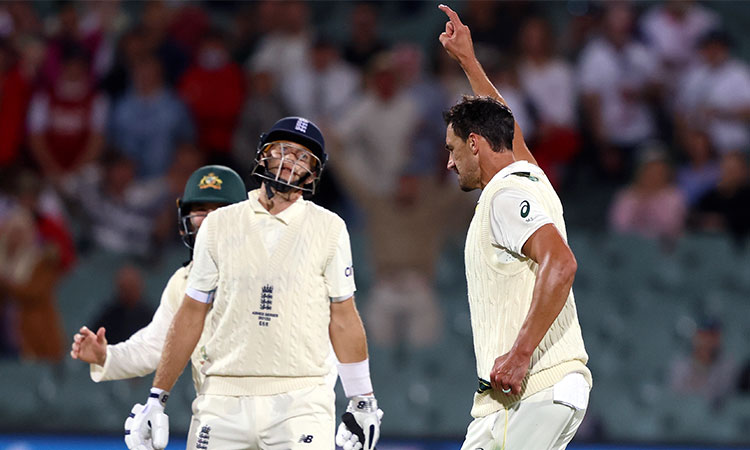 The hosts resumed their second innings at 45 for one and declared on 230 for nine midway through the second session, giving their bowlers a crack at England with the pink ball as twilight loomed.

They immediately made inroads with Jhye Richardson steaming in to Haseeb Hameed and the ball flying off his glove to wicketkeeper Alex Carey without scoring.

Dawid Malan, who hit 80 in the first innings, was dropped by Steve Smith, but only lasted three more balls before debutant Michael Neser trapped him lbw for 20.

Opener Rory Burns was desperate for a big score after a lean spell and managed 34, but was then beaten by Richardson’s sheer pace, edging to Smith at slip.

Root hurt his abdomen during a warm-up that saw him miss the opening 85 minutes while he went for a scan. He appeared mostly untroubled while batting but late in the day took a nasty blow in the same area from Mitchell Starc that left him writhing on the ground in agony. 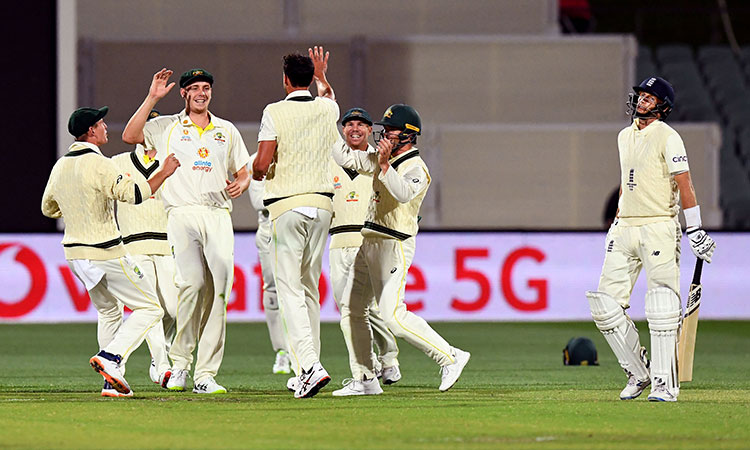 Root gingerly got up, but in a huge blow was out for 24 in the final over, caught by Carey off Starc. With England crashing by nine wickets in the first Test at Brisbane, their hopes are all but over of going into the Boxing Day Test at Melbourne in a week’s time only 1-0 down. A 2-0 defeicit in the five-match series will mean the Ashes are as good as gone.

Earlier, Marnus Labuschagne and Travis Head both made 51 for Australia, steadying the innings after England took three quick wickets for seven runs to start the day.

Interim skipper Smith could have enforced the follow-on late Saturday, but opted to send in his batsmen to build an unassailable advantage.

Marcus Harris resumed Sunday not out 21 with nightwatchman Neser on two after they lost David Warner to an amateurish run-out the previous evening. Neser only survived seven balls before a full-length Jimmy Anderson delivery rattled his middle stump, and Harris departed to a blinding catch from wicketkeeper Jos Buttler after getting a nick off Stuart Broad.

Buttler’s celebrations were short-lived when he incredibly missed a regulation catch off Smith the very next ball, in a blunder reminiscent of the two sitters he put down from Labuschagne in the first innings. But he soon went from villain to hero again by taking another fine diving catch to remove Smith for six off Ollie Robinson.

Head played at a rapid clip to reach an eighth Test half-century from 49 balls, but then pulled Robinson to Ben Stokes in the deep. Labuschagne took 96 balls to reach his 50 but also holed out to Stokes, becoming part-time spinner Malan’s first Test wicket, before late cameos ahead of the declaration.

35 killed in Russian air strikes on Lviv military base