Formula One took its globe-hoping extravaganza to the Las Vegas Strip on Saturday for an official “launch party” on what it believes will be one of the biggest sporting events in the world.

The most expensive, too.

F1 CEO Stefano Domenicali told the media the Las Vegas Grand Prix will be the most expensive fan experience on next year’s 24-race calendar, particularly from a VIP experience.

Tickets were scheduled to go on sale late Saturday night with the price of admission starting at $500 for a three-day general admission pass. Those seats were only added after fans complained that hotels planned to purchase massive ticket blocks and repackage them into entertainment experiences ranging from $100,000 to $1 million.

But ahead of tickets going on sale, seats in the grandstands started at $2,500 and the only hospitality package with a price was listed for $10,000.

“Formula One has a certain positioning with regard to the kind of sport it is,” Domenicali told the media. “We are going to deliver the greatest spectacle in the world as a statement of F1. That needs to be recognized and in terms of price positioning we are going to be on the top side because this is Las Vegas and that is the nature of the customer coming to Las Vegas.

“There will be possibilities for people who want to pay less, to spend less. As always in life, it is the market pulling the price and then on our side is the responsibility to bring a great event.” 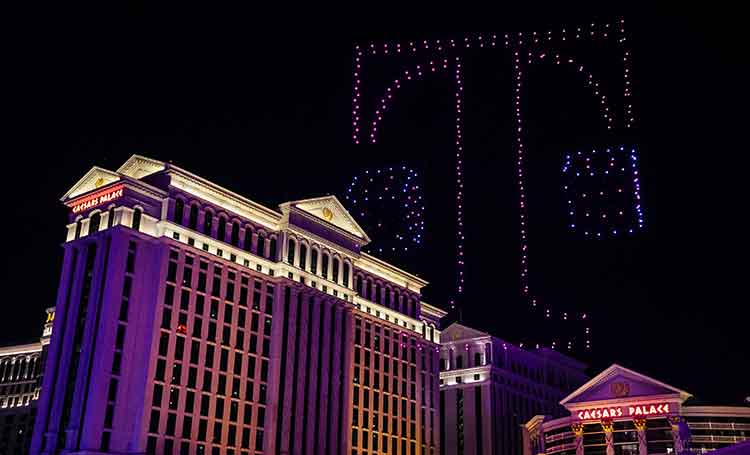 Based on an explosion in popularity in the United States created by the behind-the-scenes Netflix docudrama “Drive to Survive,” F1 in May made Miami its second annual race in the country. Las Vegas next year will make it three US stops, and five North American stops total with Montreal and Mexico City.

There was some sticker shock surrounding the pricing at the inaugural Miami Grand Prix, and Las Vegas is going to cost even more. F1, owned by US-based Liberty Media, will be a first-time promoter for the Nov. 18 night race that will use famous Vegas landmarks and rush down the Strip.

Liberty Media earlier this year purchased a 39-acre strip for $240 million for the construction of pit lanes, paddocks and hospitality, and CEO Greg Maffei on Saturday said the costs of putting on such a spectacle in a showplace city is evident in ticket prices.

“Given it is our race as a promoter, we want to make it a showcase of what can be done at all the races. We want to capitalize on the fan interest, which is enormous in the US, the demand is massive,” Maffei told the media and predicted tickets would “sell out within hours.”

“Both for us as a company, this will be the largest race in terms of revenues. It will also be the most expensive race in terms of costs,” Maffei added. “That’s just the nature of the event, the scale, and the nature of Vegas. We will try to create economic choices for fans, not all fans can pay the top dollar, we understand. This is an expensive place to operate and we’ll try to take advantage of the great things Vegas has to offer.” 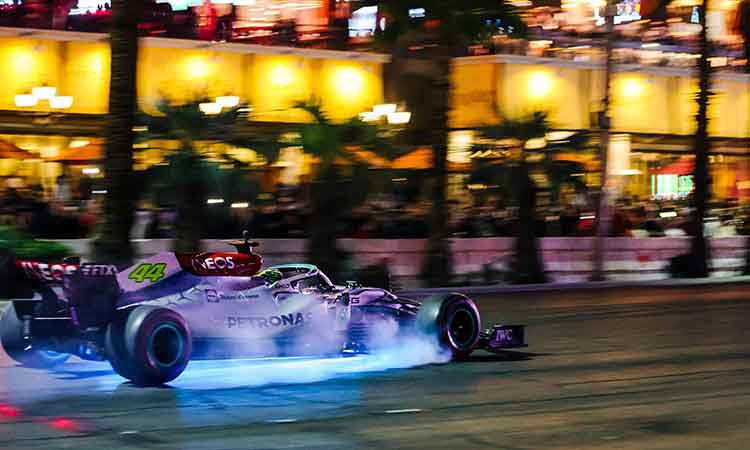 A Formula 1 racing team car from Mercedes-AMG Petronas makes a live run on the Las Vegas Strip on Saturday. AFP

The glitz and glamour that F1 has in mind was showcased at Saturday’s launch party.

Seven-time champion Lewis Hamilton and fellow drivers Sergio Perez and Alex Albon were brought in for a demonstration run of their F1 cars on the Strip, and Albon said he’s the one strangers have been approaching saying “‘You’re that Netflix guy.’ They don’t even know my name.”

Perez told The AP he expected the Las Vegas race to be the “biggest sporting event in the world next year” and Haas team boss Guenther Steiner couldn’t believe the event was even happening.

He said when he heard about Las Vegas he thought “really? on the Strip. How are we going to race cars here?’ But Vegas can make it happen.”

The “Launch Party” actually started earlier this week when an F1 car drove down the casino floor of The Wynn, and Saturday included a full day of events that included a pit stop challenge, driver appearances, a drone show above Caesars Palace and a VIP afterparty with Swedish DJ Alesso at a three-level nightclub inside Caesars.

During the driver demonstration run, Hamilton’s car broke down, and he had to catch a ride back. His car had to be pushed back.

But the “Launch Party” is a sampling of what F1 believes can do to make next year’s Las Vegas race worth the price of admission.

Hamilton doesn’t know where Vegas’ entry-level $500 standing-room only ticket ranks among other F1 races, but did note costs have risen for the consumers.

“It’s getting more and more expensive and less accessible to go to our events, and I wouldn’t think that is a good thing,” Hamilton told the media.

But with three stops next year across the United States, F1 believes it has options and experiences for every type of fan at different price levels. And on the current path, Vegas plans to be as glamorous as Monaco, maybe more.