Harry Brook bats during a training session in Rawalpindi, Pakistan, on Wednesday. AP

The first Test between England and Pakistan could be postponed after around half of the touring side’s players, including captain Ben Stokes, were struck down by an unspecified virus a day before the match.

“The PCB and ECB are in discussions regarding the commencement of the 1st #PAKvENG Test as some England players are down with viral infection,” the board said on Twitter. “The PCB continues to monitor the situation, is in contact with the ECB and will provide further updates in due course.”

A ceremony for the two captains to unveil the series trophy was postponed to earlier in the day to give Stokes time to recover.

Former captain Joe Root told reporters that “a few guys were not feeling 100 per cent,” but did not provide details on individual players and possible changes to the starting XI.

“It’s hard to say, I haven’t seen anyone this morning,” he said, adding: “I don’t think it’s food poisoning or COVID or anything like that, it’s just one of those things that we have unfortunately picked up as a group.

“I felt unwell yesterday and woke up feeling much better today, so hopefully it’s a 24-hour thing.” 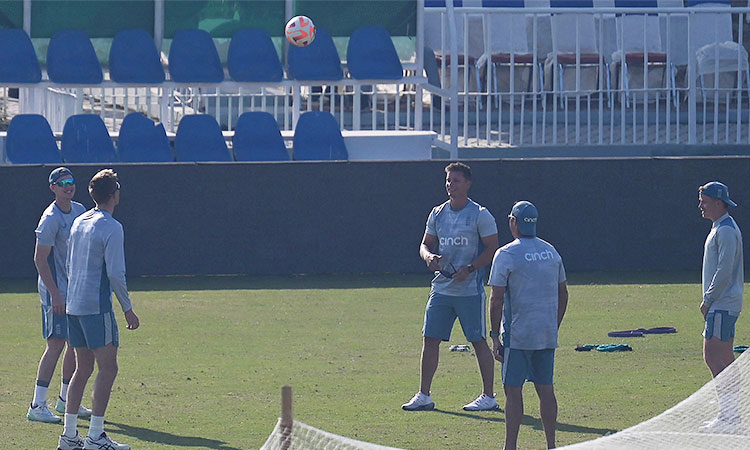 England’s players warm up during a training session at the Rawalpindi Cricket Stadium. AFP

The British press had earlier reported that players were suffering from viral food poisoning after the ECB issued a statement saying that “several players and staff members, including England captain Ben Stokes, are feeling unwell and have been advised to stay at the hotel to rest up”.

ECB spokesman Danny Reuben later clarified that “13-14 of the squad members, including six to seven players are suffering from a virus which is not related to food poisoning or Covid related”.

Root, Zak Crawley, Harry Brook, Ollie Pope and Keaton Jennings were the players at training on Wednesday, while head coach Brendon McCullum was also in attendance. All of the squad had trained on Tuesday.

Lancashire all-rounder Liam Livingstone is due to make his Test debut Thursday, while opener Ben Duckett was recalled for his first Test in six years.

England are on their first Test tour of Pakistan in 17 years, following their Twenty20 side playing seven matches in the country two months ago, taking the series 4-3.

Problems with food and players becoming ill during the Twenty20 series led to the decision to bring a chef, Omar Meziane, who also worked with the England men’s football team at the 2018 World Cup in Russia and at Euro 2020.

England and Pakistan will contest a three-Test series with the second in Multan beginning December 9 and the third in Karachi from December 17-21.