. Winners and participants with the dignitaries at the end of the TCCF squash tournaments.

Committed to its mission to champion squash at the grassroots level and ensure it becomes a popular game in the Emirates’ sports scene, the Tennis and Country Club Fujairah (TCCF) hosted two tournaments attracting top players from across the UAE.

Giving a glimpse of what would be the future, Ras Al Khaimah’s rising star Alden Fernandes won gold in both the U-11 and U-13 categories of the event.

In the U-15, Shiven Seth took gold after beating Ansh Oberoi in a thrilling match.

Aley Afifi prevailed over Manthan Pandey to take gold in the U-17 category.

Matching the feat of his brother, Omar Afifi dominated the U-19 final.

The Fernandes family once again got their name on the roll of honour as Lesly Fernandes (Alden’s father) got the better of Gourav Samtani in the B-Division final. 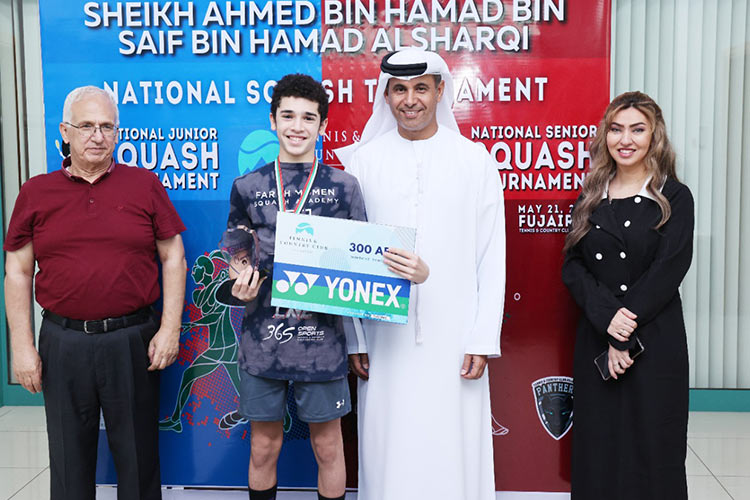 The highlight of the tournament was the battle for top honours between top seed Titov Vladislav (Russia) and second seed Muhammad Jehangir Khan of Dubai.

The Russian came off the blocks quickly against Jehangir in the A-Division final.

He quickly established a 3-0 lead, but the Dubai-native refused to give up so easily.

Jehangir stepped up his game and attempted a brief rally, but it was too late as Vladislav proved to an adoring audience the necessary skills to end the match and claim the championship.

The guest of honour, Mohammed Mubarak Al Mutaiwei, President of the UAE Squash Federation, gave away the prizes to the winners.

“I would like to offer my sincere thanks to the Tennis & Country Club Fujairah team for stepping in so enthusiastically to host this year’s squash championships,” he said.

“Such squash championships and this one in particular, are even more important for the young players to sharpen their skills and get a stage to raise their game after competing with top players,” he added.

“We want to establish Fujairah as a regional sports hub and a popular worldwide sports destination. We congratulate TCCF for its outstanding sporting facilities and dedication to promoting sports in Fujairah in particular and the UAE in general.”

Abdul Ghafour Behroozian, Chairman of Tennis and Country Club Fujairah, said: “With the popularity of racket sports expanding across the region, there has never been a better time to show our support.

“Such championships align with the vision of our wise leadership to encourage and increase the overall number of residents participating in sports and leading a healthy lifestyle.”

Hania Reggi, Senior Marketing and Sales Manager at TCCF, said: ” The TCCF has a fantastic track record of staging high-quality events, and we are happy to be hosting these championships in Fujairah and ensuring that the players and fans have a fantastic time.

“The TCCF has a long history of organizing important sporting events, including squash, and the club is certain that the young, brilliant squash players will not only dazzle on home soil but also make significant progress on the international scene.

“We also hope that this event will serve as an outstanding platform for promoting squash in Fujairah and showcasing the finest of Fujairah to the rest of the globe. The TCCF team is excited to announce the next PSA Tournament will take place in August 2022,” Hania signed off.

Jaques Harmes, Director of Squash Tournament, said that it’s fantastic to be part of another successful national squash tournament, which will help in promoting the game at the grassroots level.

“We want to establish an environment that will appeal to and welcome young squash players. This year’s event attracted squash players from all over the UAE, who competed in thrilling matches in both junior and senior categories, and we are pleased that the tournament displayed the highest standards of the game in the UAE,” he added.