Pakistan star pacer Shaheen Shah Afridi on Sunday said that he is “feeling better” following an appendectomy — a surgical operation to remove the appendix — and urged his fans to keep him in their prayers.

The 22-year old pacer took to social media to give an update about the medical procedure.

“Had an appendectomy today but Alhumdulillah feeling better. Remember me in your prayers,” tweeted Shaheen along with his picture on the hospital bed. 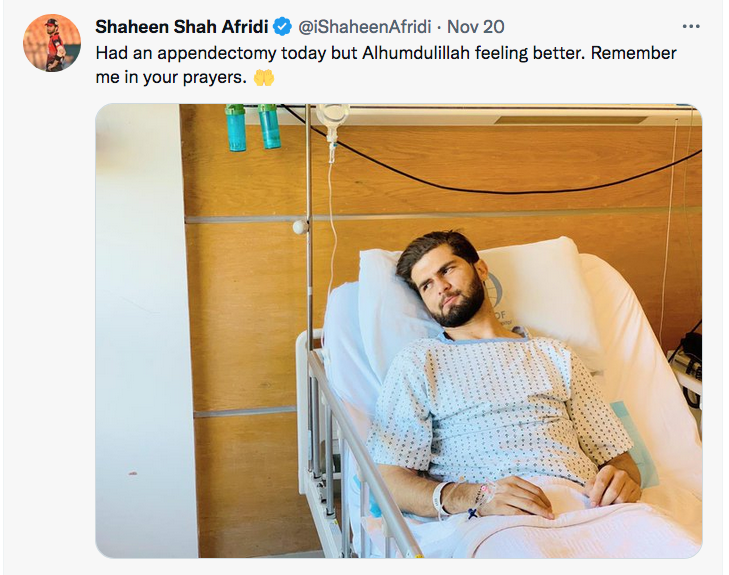 At the MCG in the T20 World Cup final against England, Afridi had to hobble off the field after experiencing some discomfort in his knee, leaving Pakistan a bowler short at the crucial stage of the game.

He had shown signs of pain on the field, especially after taking a catch to dismiss Harry Brook. As he slid low from long-off to hold on, he appeared to have hurt his knee and was immediately in some pain and was helped off the field by the team physio and doctor.

The left-arm fast bowler returned an over later, ran in gingerly to send down one delivery, but couldn’t carry on. He bowled just 2.1 overs in all.

Earlier, Pakistan Cricket Board (PCB) on November 14 had said that Shaheen has been advised two-week rehabilitation.

“The scan conducted on Monday morning prior to the team’s departure for Pakistan, has confirmed there were no signs of an injury and the knee discomfort was likely due to a forced knee flexion whilst landing,” the PCB had said in a statement.

“The scans were discussed between PCB’s Chief Medical Officer, Dr Najeebullah Soomro, and Australian knee specialist, Dr Peter D’Alessandro, and it was reassuring to know that there was no injury. The left-arm fast bowler is feeling better and is in high spirits,” it added.

The PCB had also mentioned that the left-arm bowler’s return to the cricket field will be determined by the medical staff.