The five winning team captains from the Sharjah Labour Sports Tournament pose with their trophies after the presentation ceremony.

Organised by LSDA on the sports fields of Sharjah National Park in cooperation with the Sharjah Sports Council and Sharjah Sports Club, some 1,400 players, forming 97 teams, participated in the tournament in five sports disciplines, including football, basketball, volleyball, hockey, and cricket. The competitions were held every Friday during the tournament for a period of three months.

Speaking at the end of the closing ceremony, Qaseer affirmed that the fifth edition of Sharjah Labour Sports Tournament, like previous editions, ended with great success.

He said: “The tournament has succeeded in encouraging workers to have sports as a healthy lifestyle, and at the same time follow the safety requirements adopted in sports events in the country. 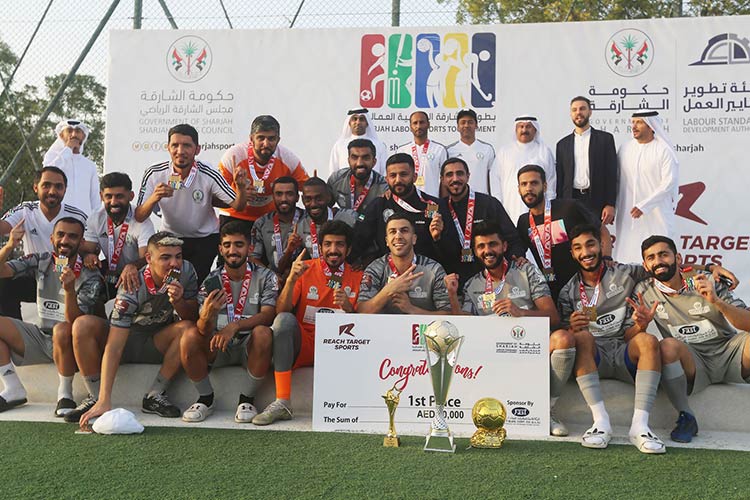 Members of the Sharjah Police football team celebrate with the trophy.

“They are both interested in encouraging labour sports,” he added.

He pointed out that the tournament complements the sports boom in Sharjah and aims to integrate labour sports into the sports scene of the Emirate, adding a new chapter in the city’s sports achievements.

Qaseer said: “We at LSDA are proud of the great demand and success of the tournament, being the first of its kind in the country. By organizing it, we seek to devote ourselves to the idea of teamwork, on which sports are based, and to contribute to promoting labour sports.”

The LSDA chairman thanked Sharjah Sports Council, Sharjah Sports Club, the organizing company Reach Target, and all those who contributed to the success of the tournament, including sponsors and institutions from the public and private sectors.

Qaseer gave away the trophies to the winning teams. . Awards were also given to the teams finished as runners-up and who claimed third spot in the different categories of the longest running tournament of the Emirate.

The Sharjah Police team emerged victorious in the football competition and clinched a gold medal by winning the final against Al Rayes 3-2.

Nawfal Al Taie of the Sharjah Police team was adjudged the player of the tournament, while Ibrahim Afana of the Fast team was the top scorer. Al Rayes team’s Khalil Bakhash got the best goalkeeper award, and Omar Al Jundi was named the best manager alongside Adel Abdul Karim of Sharjah Police.

The Burgery team was crowned champions in the basketball category of the tournament. The Fast team finished second, and Pasta Zone took third spot.

In the volleyball competition, the Big Mart team came first, the second position went to the Pasta Zone team, and the third was the ZAC Electronics team.

In cricket, the first place went to the Sharjah Police team. The Special 95 Shj team took the second spot, and the Sharjah Cooperative team finished third.