Players in action during a volleyball championship match of the Nad Al Sheba Sports Tournament on Wednesday.

Fohood Zabeel defeated HMS 3-2 in a thrilling clash on the opening night of the volleyball championship at the Nad Al Sheba Sports Tournament on Wednesday.

With a large crowd in attendance, the HMS Group team started well and established a lead quickly. Refusing to give up easily, Foohod Zabeel bounced back to level the scores and later took the first set, 25-19.

The two teams were neck-to-neck in the pulsating second set. Displaying perfect teamwork, HMS Group edged their rivals in the second.

HMS Group was dominant in the next set as well, but withered later and a shift in momentum soon allowed Foohod Zabeel to come back into the match.

In a hard-fought final set, HMS Group took an early 8-5 lead and were cruising towards victory, but Foohud Zabeel players gave their best shot and halted their charge to finally prevail over their opponents, 15-11.

On the second day of the volleyball competition, the Emperor will start their campaign against Al Jawareh, and the Spider team will face Zabeel.

Four matches took place in the wheelchair basketball competition of the tournament. The Khorfakkan Club for the Disabled defeated the Dubai Police General Command team 39-14, and the General Directorate of Residency and Foreign Affairs in Dubai downed Dnata 31-6.

Khorfakkan Club for the Disabled dominated the match from the beginning before registering an easy win over the Dubai Police General Command team.

Dnata were no match for the General Directorate of Residency and Foreign Affairs in Dubai, as the latter scored points at their will in the one-sided clash.

In other matches, the Dubai Municipality team beat the Dubai Roads and Transport Authority team 43-12, and the Dubai Corporation for Ambulance Services team drubbed the Dubai Department of Finance team 30-13.

In the inaugural GCC Men’s Padel Team Championship, Qatar defeated Saudi Arabia. It was an easy victory for Qatar as they completely dominated the first two sets and hardly broke a sweat in the remaining part of the match.

The Kuwait national team brushed aside Oman in a one-sided match.

In the women’s competitions, the Kuwait team beat Saudi Arabia, while Oman edged past the hosts UAE in a nail-biting clash of the day.

One of the highlights of the tournament, the 75km NAS Cycling Championship starting on Friday, will witness competition across multiple categories like Men’s Open, People of Determination category, Women’s Open, Amateur Emiratis and Amateur Female.

Around 1350 cyclists will be taking part in the different categories of the championship. 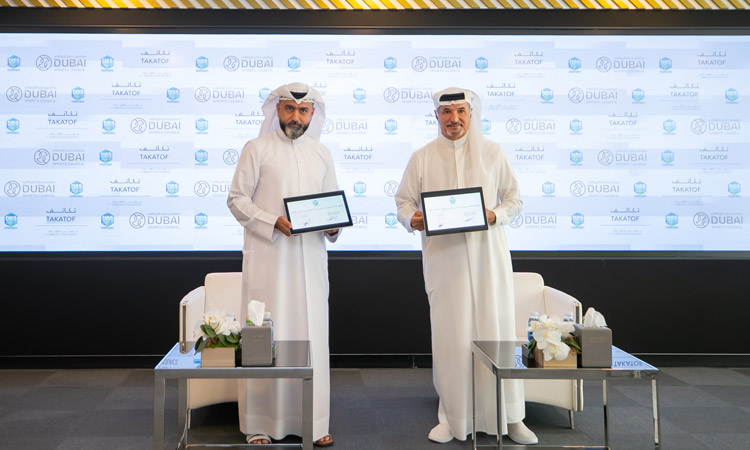 Saeed Hareb and Mohammed Abdul Hamid Al Hosani pose for a picture after signing an agreement.

The NAS Run will feature races in different categories across two distances – 5km and 10km – and it is open to all men and women living in the UAE, of any nationality or ability, but only amateurs are allowed to take part in the 5km run.

Meanwhile, the Emirates Foundation joined the roster of sponsors for the ninth season of the tournament, through the (Takatof) volunteer programme.

The sponsorship agreement was signed at the headquarters of the Dubai Sports Council in the presence of Saeed Hareb, Secretary General, and Mohammed Abdul Hamid Al Hosani, Director of Leadership and Empowerment and Director of Programmes at the Emirates Foundation.

The agreement will enhance the presence of the UAE youth in the tournament and confirms their important role in the success of the sporting events that are organized in the country.

Takatof is a voluntary social programme, established in 2007, designed by the Emirates Foundation to foster a culture of volunteering throughout the UAE. Takatof mobilizes people and resources across the nation to deliver creative and sustainable solutions for proven community needs.