Manchester City finally got the better of Southampton at the third attempt this season with a 4-1 win to move into the FA Cup semi-finals on Sunday.

City’s bid to retain their Premier League title has been hindered by two draws against the Saints and Ralph Hasenhuttl’s men held their own again for an hour at St. Mary’s.

Adam Armstrong nearly made the most of a rare start when he hit the post early on for the home side. But just seconds later Raheem Sterling opened the scoring with a cool finish from Gabriel Jesus’ pass. 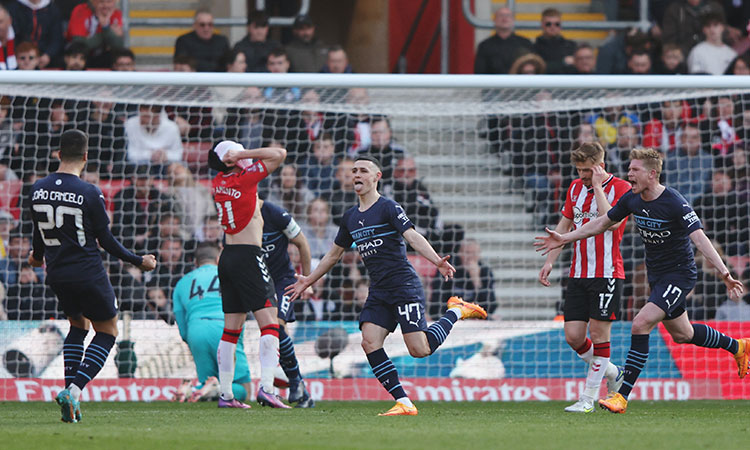 Ilkay Gundogan then hit the woodwork, but Southampton got the equaliser their first-half performance deserved when Aymeric Laporte deflected Mohamed Elyounoussi’s cross into his own net. With the tie delicately poised, the Saints’ good work was undone when Mohammed Salisu needlessly dived in on Jesus to concede a penalty.

Fraser Forster got a hand to Kevin De Bruyne’s spot-kick but could not keep it out. City’s strength in depth off the bench then took the game away from the hosts as substitutes Phil Foden and Riyad Mahrez produced lethal finishes to give the scoreline a harsh reflection on Southampton.

Earlier, Palace stormed into the last four for the first time in six years by seeing off sorry Everton.

Marc Guehi, Jean-Philippe Mateta, Wilfried Zaha and Will Hughes got the goals as the Eagles continued their impressive first season under Patrick Vieira. “Going to Wembley is fantastic,” said Vieira.

“You can hear the atmosphere in the stadium, the fans; this is what they wanted and we wanted to give it to them.”

Everton’s focus now turns to just staying in the Premier League as they sit perilously just above the relegation zone. “We allowed them a free pass into the semi-final without Palace even playing particularly well,” said Everton boss Frank Lampard.

Everton managed just a second league win in 12 games against Newcastle on Thursday and started like they could build on that confidence boost.

However, there was no way back once their frailty from set-pieces was exposed for the opening goal.

Guehi was called into the England squad for the first time this week and celebrated with his fourth goal since joining from Chelsea as he headed in Michael Olise’s corner.

The combination of Olise, Zaha and Eberechi Eze then began to cut Everton apart, no more so than in a flowing move for the second goal. Eze’s quick feet freed Zaha down the left and his low cross was swept in by Mateta.