Luke Gillian sits behind a placard as he watches the first Test cricket match between Pakistan and Australia at the Rawalpindi Cricket Stadium. AFP

When Australian cricket fan Luke Gillian last visited Pakistan in 1998, home supporters threw stones at him when he ventured out in public.These days everyone wants a selfie.
Gillian is back in Pakistan with a small contingent of Australian fans on their first tour of the country in nearly a quarter of a century — and has been blown away by the welcome they have received.

Australia for 24 years, along with many international teams, declined to tour Pakistan on security grounds.

But the cricket-mad nation is lapping up the current tour by the world’s top-ranked Test team, which will see the three-Test series go to a decider in Lahore next week after draws in Rawalpindi and Karachi. 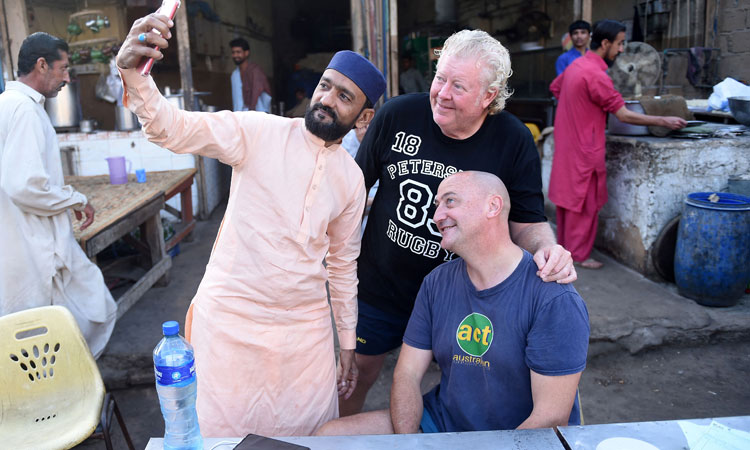 “It was perceived to be too dangerous to go outside,” Gillian said of his visit on Australia’s last tour in 1998.

“When I did get outside there were large groups of people walking in the streets and I had rocks thrown at me.
“And I went, ‘Nah, I am just going to go back home, I don’t need to put up with this’.”
Nearly a quarter of a century later, attitudes have changed.
“I reckon, in Rawalpindi, 500 photographs were taken of me every day, easily,” the 51-year-old from Victoria told AFP.

“I have been given I don’t know how many cups of tea, how many pieces of cake, bottles of Pepsi, water and just little incidentals people have given us as a ‘thank you’ — free haircuts, free laundry.”
Like most Australians, Gillian took to cricket as a child.

“You grow up with cricket in your blood,” he said.
“You often hold a cricket bat or a ball before you know how to walk, and as soon as you can walk, you mark your run-up to bowl.”
Over the years he has visited every major cricket-playing nation — even socialising with Australian greats such as Shane Warne, Adam Gilchrist, Michael Clarke and Justin Langer. 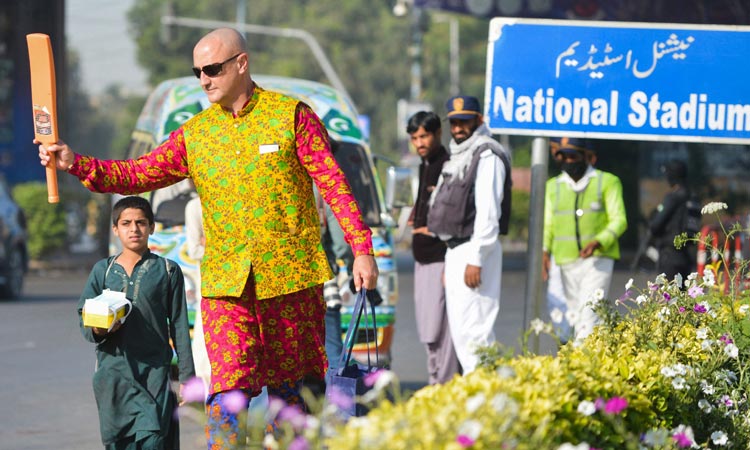 Luke Gillian arrives to watch the second Test cricket match between Pakistan and Australia at the National Cricket Stadium in Karachi. AFP

But those days are a thing of the past, with modern players under intense social media scrutiny, coupled with strict anti-match fixing protocols to keep players away from “undesirable” elements such as illegal bookmakers.
“Now there is a strong disconnect between myself and the team,” said Gillian.

“Let’s go back 15 years… I would still get text messages (from players), saying: ‘We are going to go for a beer in this place after the game, if you want to join us’. It’s gone and I miss it,” he said.

Gillian said he decided to make this trip as much to support Pakistan’s efforts to re-establish itself as a safe cricketing destination as to shout for Australia.

“I am here for the game, to show the outside world that we can actually watch cricket and travel to Pakistan and be safe, be happy and enjoy,” he said.

Socially this is so much more relaxed than it was 24 years ago. It is so much easier to be here. So much easier to enjoy Pakistan.
“I think that love, and the embrace of each other and the game itself, if that goes across to the wider audience, then it can sell the great game and sell the connect between the two nations and two cultures.
“Win or lose, it doesn’t matter.”

Ramadan a perfect occasion to commemorate