Sri Lanka’s Pramod Madushan (centre) is run out during their match against Namibia during Twenty20 World Cup tournament at Kardinia Park in Geelong on Sunday. AFP

Jan Frylinck smashed 44 runs and took two wickets as Namibia hammered Asia Cup champions Sri Lanka by 55 runs to cause a major upset in the opening match of the Twenty20 World Cup on Sunday.

The left-handed Frylinck and JJ Smit, who made an unbeaten 31, lifted Namibia to 163-7 with their 69-run seventh-wicket stand after being invited to bat first in Geelong.

Sri Lanka were then bowled out for 108 in 19 overs with David Wiese, Frylinck, Bernard Scholtz and Ben Shikongo taking two wickets each in the team’s first of three opening-round matches.

The African minnows are on course for a second straight Super 12 place after achieving the feat on their T20 World Cup debut last year in the United Arab Emirates.

“Incredible journey, last year was a special experience for us. We’ve started a great win, but lot of work to do throughout this tournament still,” skipper Gerhard Erasmus said after the stunning win.

“It’s been a historic day for us. The opening day has been quite special but we want to kick on from here and qualify for the Super 12 stage. We understand the bigger picture as well.”

Jan Nicol Loftie-Eaton fell to a brilliant diving catch by wicketkeeper Kusal Mendis after a 12-ball 20. 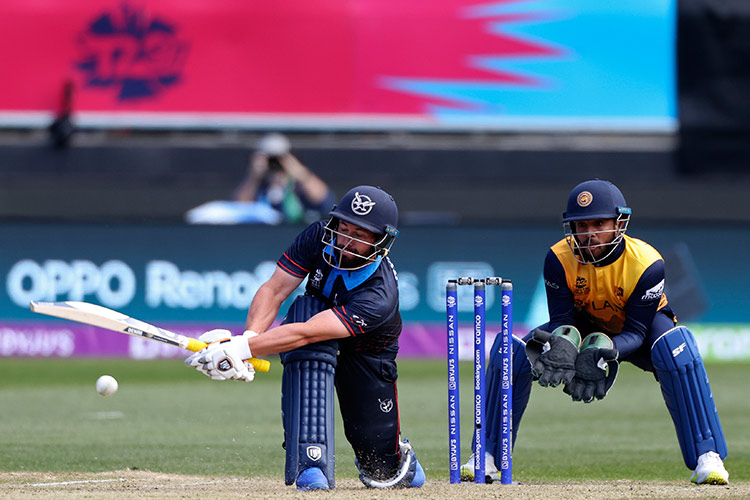 Stephan Baard and skipper Gerhard Erasmus attempted to rebuild with a stand of 41 but Sri Lanka’s bowlers kept chipping away with wickets.

Namibia slipped to 93-6 when spinner Maheesh Theekshana got big-hitter David Wiese caught behind for nought but Frylinck, who hit four fours in his 28-ball innings, and Smit had other ideas.

The pair took the attack to the opposition with five fours and two sixes in the final five overs.

Sri Lanka, who won the Asia Cup last month, lost Kusal Mendis for six when his top-edge off Wiese ballooned up to land in the gloves of Zane Green.

Shikongo silenced the Sri Lankan fans when he sent back Pathum Nissanka for nine and Danushka Gunathilaka for nought from consecutive balls.

“Once we lose three wickets in the powerplay, we are usually out of the game,” said skipper Dasun Shanaka.

“The plans should be simple, we need not do anything special. We’ve got a good team, it’s about the process.”

Frylinck, a left-arm seamer who was named man of the match, removed Dhananjaya de Silva as Sri Lanka slipped to 40-4.

The left-handed Rajapaksa and Shanaka, who made 29, attempted to put the chase back on track with a partnership of 34 but Scholtz broke the stand with his left-arm spin.

Scholtz got Rajapaksa out for 20 when he skied a shot and also sent back Wanindu Hasaranga.

Nato invites Finland and Sweden to join, says Russia is a ‘direct threat’