The Polish 20-year-old has now become only the fourth — and youngest — player to win the “Sunshine Double” of Indian Wells and Miami in the same year following Steffi Graf, Kim Cljisters and Victoria Azarenka.

Swiatek, who will be formally confirmed as world number one when the new WTA rankings are announced on Monday, has now won 17 straight games, a winning streak that includes titles in Doha, Indian Wells and now Miami.

“When I was watching Naomi win the US Open, I never thought a few years later I would be playing her in the final,” said a delighted Swiatek, who is also the only woman ever to win the first three major WTA tour events of the year. 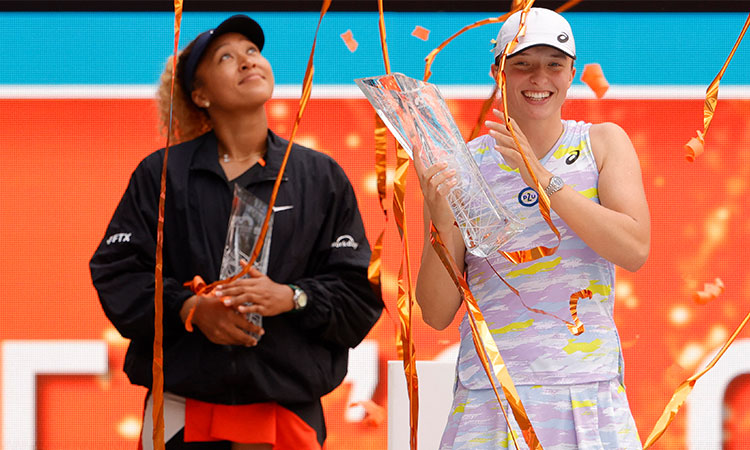 Iga Swiatek holds the Butch Buchholz Championship Trophy as Naomi Osaka holds the finalists’ trophy during the awards ceremony at Hard Rock Stadium. Osaka, 24, enjoyed a welcome return to form in Florida even if the four-time Grand Slam champion’s first final since the Australian Open in 2021 ended in a comprehensive 6-4, 6-0 defeat.

Swiatek headed into a sixth career final on the back of 16 straight wins — the last player to win 16 or more in a row was Osaka who was on fire between Cincinnati in 2020 and last year’s Miami Open.

Their only previous meeting in 2019 ended with a straight sets win for Osaka over an 18-year-old Swiatek.

Osaka has been serving well this tournament and hit an impressive 18 aces in her semi-final win over Belinda Bencic but was broken by Swiatek to make it 3-2 in the first and began to look susceptible.

The former French Open champion is one of the finest returners in the women’s game and even though Osaka was attempting to aggressively jump upon Swiatek’s second serve, her opponent was far more consistent and clinical overall.

A break of the Osaka serve right at the start of the second saw any lingering hopes for the Japanese melt in the Miami sunshine and Swiatek easily moved through the gears to land her sixth career title amid joyous scenes at Hard Rock Stadium.

“I want to dedicate this to my fans and family,” Osaka said afterward.

“I haven’t been in this position for a while but I have had a lot of fun here and hopefully I’ll get more opportunities to be in this position again,” added Osaka, who left Indian Wells in tears last month after being heckled by a fan following a second round defeat.

“Iga’s journey has been amazing and I am sure she will keep moving forward. This wasn’t the outcome I wanted but just to be in the final was great.”