Pakistan (L) and Australian’s players observe a minute silence to commemorate Shane Warne, before the start of the second day of the first Test match in Rawalpindi on Saturday. AFP

Australia’s former star cricketer Shane Warne passed away at the age of 52 from a suspected heart attack in Thailand.

Taking to Twitter, Imran said, “Saddened to learn of the sudden passing of cricketer Shane Warne, a bowling genius who took the art of leg spin to new heights.”

Paying tribute to the late cricketer, PM said, “He will be missed across the cricketing world.”

Earlier, Australia and Pakistan cricketers wore black armbands and observed a minute of silence in memory of Shane Warne ahead of the start of the second day’s play in the first test on Saturday.

“It’s just a really tough time with both Rod (Marsh) and Shane,” Australia captain Pat Cummins told the host broadcaster ahead of the start of second day’s play.
Cummins said the players heard about Warne’s death as they were leaving the ground yesterday at the end of first day’s play at the Pindi Cricket Stadium. 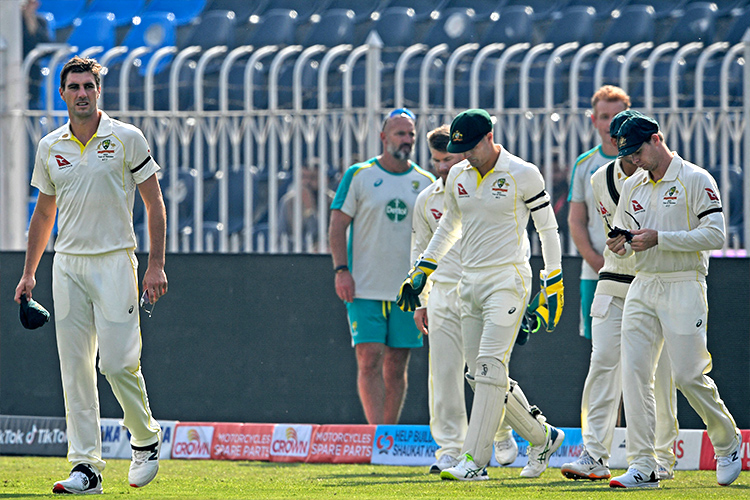 “I just encouraged everyone to talk about it, look after each other. Everyone’s worked through it differently. Everyone knew Shane, but you know, some people knew him better than others.”

“I started (watching Warne) being kind of 10, 11, 12 years old and really appreciated just what a giant of the game he was and probably started to learn and appreciate the art of spin bowling,” Cummins said. “And, you know, his showmanship and all those things that he brought to Australian cricket, so that’s probably my longest lasting memories.” 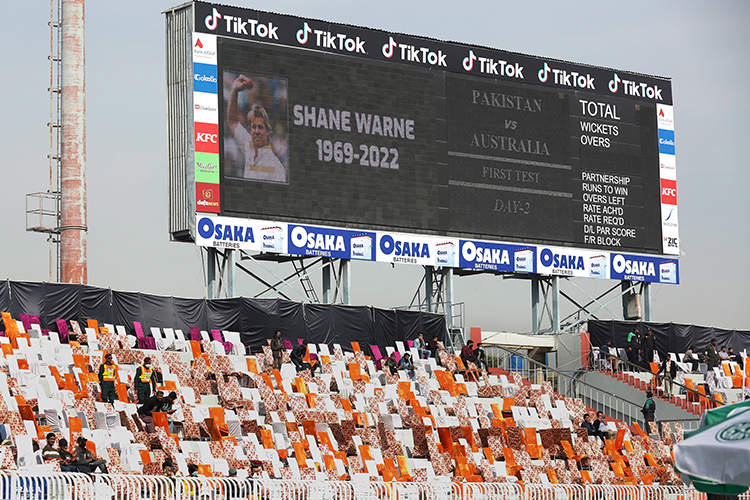 Spectators sit under a screen displaying a picture of Shane Warne following his death. AFP

The Pakistan Cricket Board said Warne will be missed.

“The PCB is shocked and devastated to hear the news of Shane Warne’s passing,” the PCB tweeted. “Shane will be sorely missed and cricket will be poorer without him. Our heartfelt condolences to Cricket Australia and Shane’s family and friends.”