India’s players pose with the trophy after winning the Test series against Sri Lanka at the M. Chinnaswamy Stadium in Bangalore on Monday. AFP

Chasing 447 for victory, Sri Lanka were bowled out for 208 in the second session after skipper Dimuth Karunaratne’s valiant 107, on a pitch that turned from day one.

Fast bowler Bumrah ended Karunaratne’s spell and got one more to take his match tally to eight wickets while spinner Ravichandran Ashwin took four over the day.

Shreyas Iyer and Rishabh Pant, respectively named man of the match and man of the series, scored 67 and 50 in India’s 303-9 declared on day two.

Their key roles brought an emphatic victory that left the hosts unbeaten in all three of their home day-night Tests.

“It’s been a good run, (I) enjoyed it personally,” the skipper said after the match.

“As a team, there were so many things we wanted to achieve and I think we did.”

Left-handed Karunaratne made a second wicket stand of 97 before Ashwin broke through for the stumping of the captain’s overnight partner Kusal Mendis, who recorded his 12th Test half-century.

Karunaratne went on to wage a lone battle and raised his century — the sole hundred for a Sri Lankan batsman in this Test series — with a boundary off Bumrah. 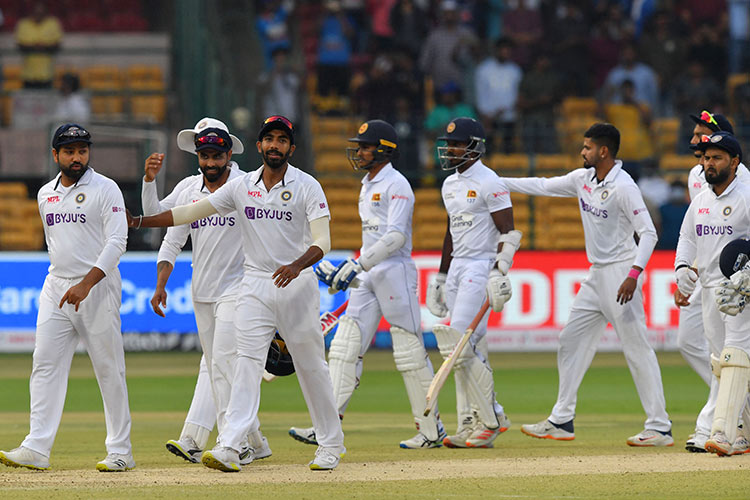 Indian players celebrate their win as they walk back to the pavilion at the end of the second Test match against Sri Lanka at the M. Chinnaswamy Stadium in Bangalore on Monday. AFP

“I would have been more happy if we had won,” Karunaratne said afterwards.

“We batted under lights and it was tough,” he added. “We have a good team, (but) the batting didn’t capitalise on these conditions.”

India, who gained crucial Test championship points in the whitewash, remained dominant from day one after Iyer hit 92 and lifted the team from a precarious 86-4 to 252 all out.

Bumrah then returned figures of 5-24 for his maiden five-wicket haul at home to dismiss Sri Lanka for 109.

The series will be remembered as marking Virat Kohli’s 100th Test in the opening game in Mohali, though the star batsman scored just 45, 23 and 13 in the three Indian innings.

The former captain twice fell lbw in this Test to take his average down to below 50 for the first time since 2017, but the crowd at M. Chinnaswamy Stadium gave him a rousing reception.

Sri Lankan quick Suranga Lakmal took one wicket in his last Test and finished his career with 171 scalps in 70 five-day matches since his 2010 debut.

Lakmal scored one before being bowled by Bumrah, who joined India’s team in a rush to farewell the 35-year-old veteran.

The tourists, who lost the opening Test by an innings and 222 runs, suffered a total whitewash after they lost the preceding Twenty20 series 3-0.

Players from India and across the world will now assemble for the Indian Premier League, which begins March 26.