Sakibul Gani poses for a photograph after a match. File / Photo via Twitter

India’s Sakibul Gani became the first batsman in world cricket to hit a triple century on his first-class debut when he made 341 in the Ranji Trophy tournament.

The 22-year-old walked out to the crease for Bihar against Mizoram in Kolkata on Friday, the second day of their four-day match in the country’s premier red-ball competition. By the time he was out 405 balls later he had plundered 56 fours and two sixes. 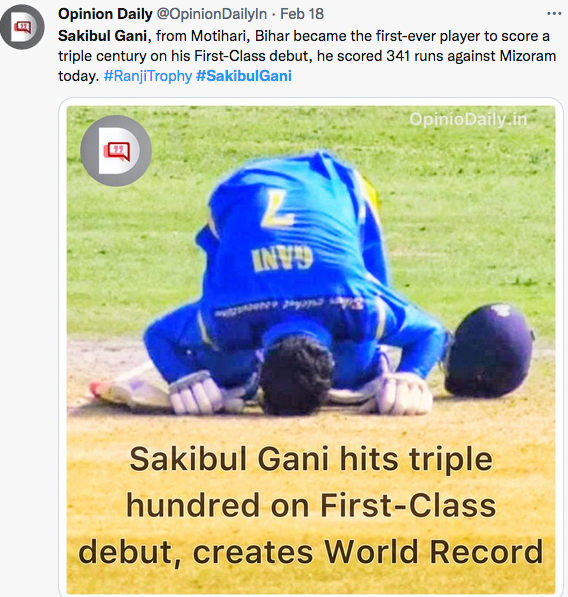 The right-hand batsman surpassed fellow Indian Ajay Rohera’s record of 267 not out for Madhya Pradesh in the 2018-19 Ranji Trophy season.

Another Indian Amol Mazumdar stands third with his 260 for Bombay, now Mumbai, in 1994.

Former India wicketkeeper Saba Karim — who comes from Bihar himself — lauded Gani’s effort and tweeted: “Scoring a triple ton is always special. It becomes an extraordinary innings when someone gets it on debut.” 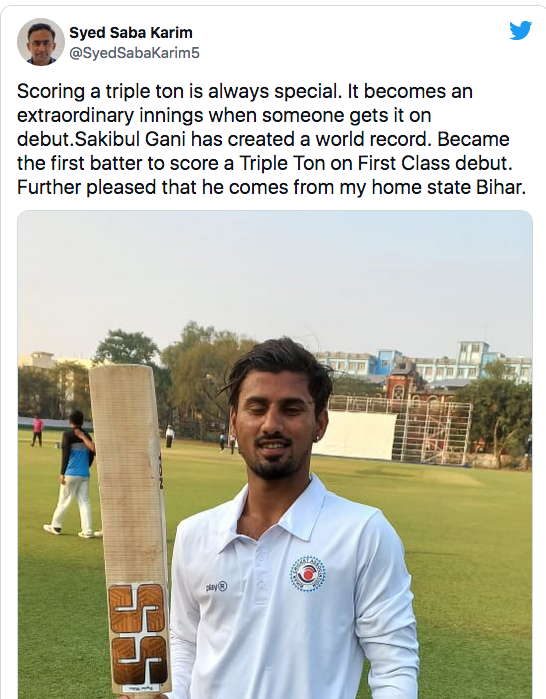 Batting at number five, Gani put on a marathon stand of 538 with Babul Kumar, who made an unbeaten 229 — giving them a world record for the highest fifth-wicket partnership in first-class cricket. Bihar declared their innings on 686 for five.

The first-class competition — named for Maharaja Ranjitsinhji, an Indian prince who played for England in the 1890s — had a delayed season start on Thursday due to the coronavirus pandemic.