Pusarla Sindhu poses on the podium following her victory against Wang Zhiyi in their women’s final match at the Singapore Badminton Open in Singapore on Sunday. AFP

“I’m very thankful for my father to be here in Singapore. He has always been there for me, guiding me and it is nice to have him here to see me win,” said Sindhu. 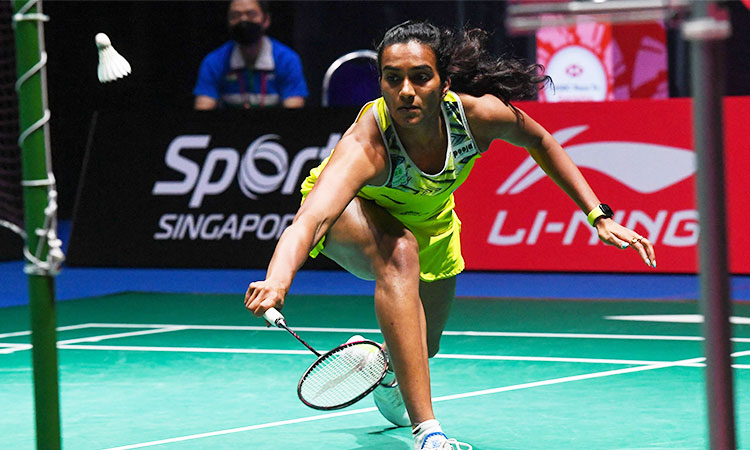 This was her third title of the year after she won the Syed Modi International in January and the Swiss Open in March, which were BWF Super 300-level meets.

“Heartiest congratulations to PV Sindhu for winning the Singapore Open 2022 tournament for the first time. Your resilience and enthusiasm are inspiring. May you continue to bring glory and pride to our country,” said the President of India in a tweet.

According to Prime Minister Modi, Sindhu’s win is a proud moment for the country and her victory will inspire upcoming players.

“I congratulate PV Sindhu on winning her first ever Singapore Open title. She has yet again demonstrated her exceptional sporting talent and achieved success. It is a proud moment for the country and will also give inspiration to upcoming players,” Modi tweeted.

The Sports Minister felt that the star Indian badminton player is looking in great form with her third title of the year.