Croatians and Japanese supporter ahead of the Qatar 2022 World Cup round of 16 football match between Japan and Croatia at the Al Janoub Stadium, Doha, on Monday. AFP

And they’ll need another quality that Nagatomo learned playing for almost a decade in Italy, mostly with Inter Milan. “Coraggio,” Nagatomo said. “We need to play with courage.”

Japan is appearing in the knockout stage for the fourth time and still searching for its first win. It rallied in group play to beat both Germany and Spain – two former world champions – 2-1 but also stumbled to a 1-0 loss against Costa Rica.

Croatia, the smallest country in the final 16 with a population of only 4 million, was the runner-up four years ago against France and finished third in 1998. 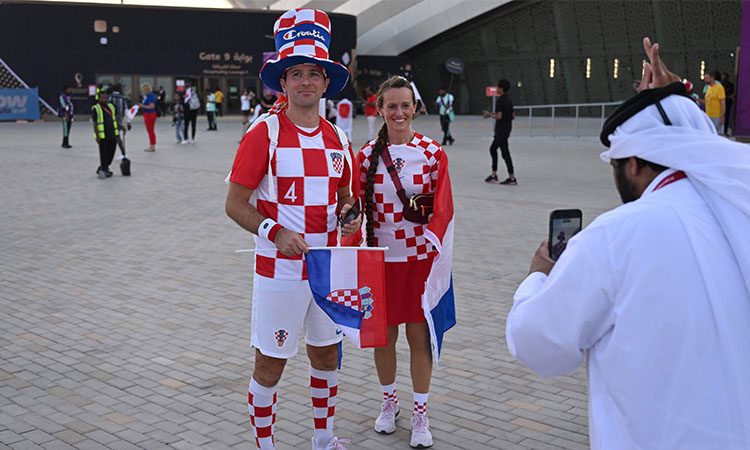 Croatia supporters pose as they arrive for the Qatar 2022 World Cup round of 16 football match at the Al Janoub Stadium. AFP

Could the third time be the charm? “Why not,” said Croatia coach Zlatko Dalic.

This is Nagatomo’s fourth World Cup, and he recalls how Japan led Belgium 2-0 in a round of 16 match four years ago in Russia, but was eliminated 3-2 on a goal scored late in second-half stoppage time.

“I have never forgotten,” Nagatomo said, before returning to the subject of Japanese samurai warriors as a metaphor for Japan’s World Cup campaign.

“They try to improve their techniques,” he said. “But if they are scared during the battle they will not be able to use their weapons and techniques fully.”

Japan coach Hajime Moriyasu said the loss to Belgium was a valuable lesson for his team.

“That experience was very precious and we can reflect on what we learned in that match with Belgium,” he said. Dalic said his team will be well prepared; they have seen many Japan players in action in the German league. 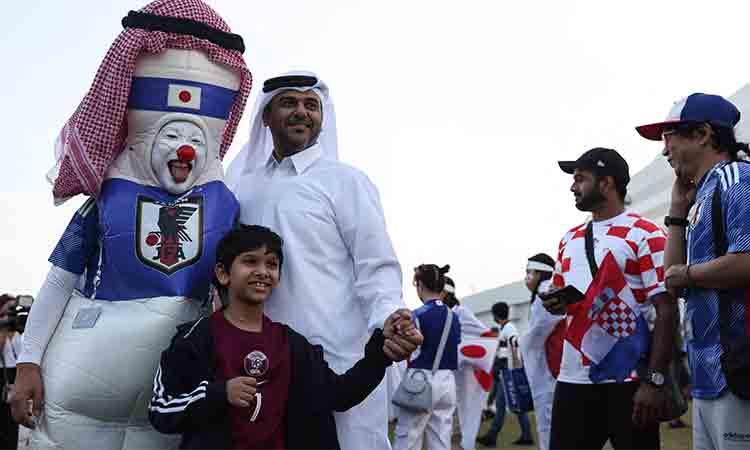 Japan supporters pose for a picture outside the Al Janoub Stadium in Doha. AFP

“They will apply the samurai philosophy in their game,” he said. “We will also do our part. We know how important this match is for us. We know who the opponent is. We know their mentality. If we want to go father we must apply that same standard, that same attitude.”

Croatia advanced with 0-0 draws against Belgium and Morocco, which came either side of a 4-1 victory over Canada.

Real Madrid midfielder Luka Modric, the world player of the year in 2018, remains the heartbeat of a team whose experienced midfield is typically a match for any opponent but which still lacks a prolific scorer up front.

Each game the 37-year-old Modric plays from now on could be his last at a World Cup. The winner Monday faces either five-time champion Brazil or South Korea in the quarterfinals.