Elena Rybakina reacts, holds the trophy as she celebrates after beating Ons Jabeur in London on Saturday. AP / AFP

Elena Rybakina beat Ons Jabeur 3-6, 6-2, 6-2 in the Wimbledon final on Saturday to become the first tennis player from Kazakhstan to win a Grand Slam singles championship.

Rybakina is a 23-year-old who was born in Moscow and has represented Kazakhstan since 2018, when that country offered her funding to support her tennis career. The switch has been a topic of conversation during Wimbledon, because the All England Club barred all players who represent Russia or Belarus from entering the tournament due to the war in Ukraine.

Rybakina is ranked No. 23. Since the WTA computer rankings began in 1975, just one woman ranked lower than Rybakina won Wimbledon – Venus Williams in 2007 at No. 31, although she had been No. 1 and already won three of her five career Wimbledon trophies. 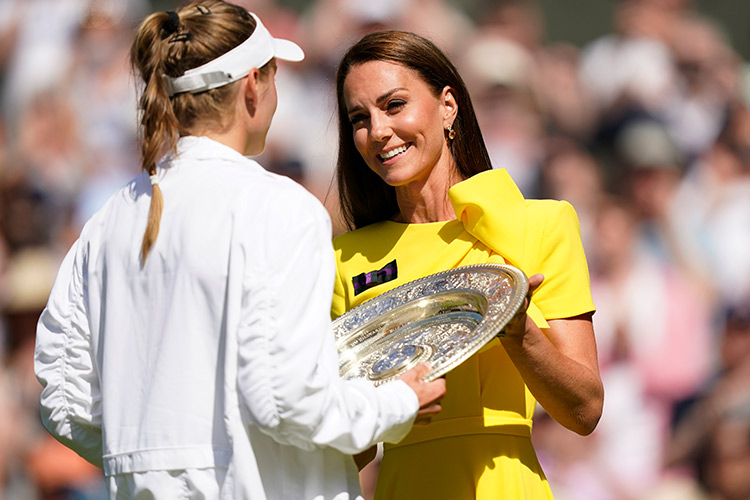 This was the first women’s title match since 1962 at Wimbledon between two players who were making their debuts in a major final.

Rybakina showed off her best strokes right away: a big serve – she leads the tour in aces in 2022 by a wide margin – and flat forehand. There were glimpses of both in the opening game, including a 119 mph service winner on the match’s initial point. 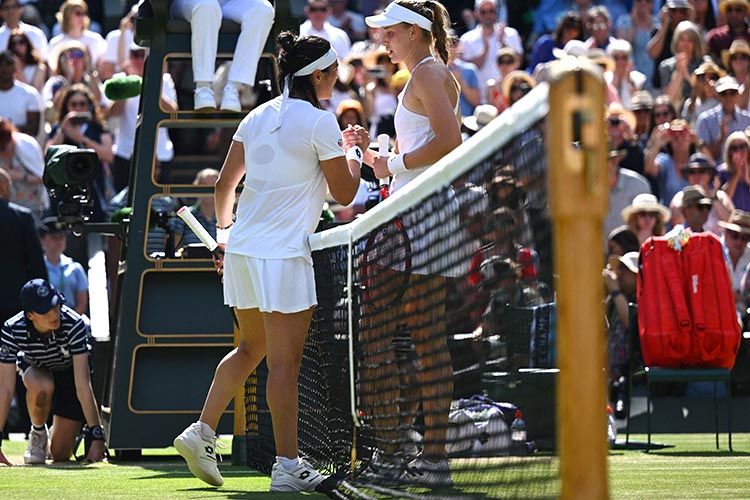 It did not take long for Jabeur, the 27-year-old from Tunisia, to adjust.

By Rybakina’s second service game, Jabeur was reading serves better and using her trademark variety to create less-inviting opportunities for baseline power. One squash-style forehand drew a forehand into the net to earn a break point, which Jabeur converted to lead 2-1 by putting a 120 mph serve into play then watching Rybakina sail a backhand long. Jabeur turned toward her guest box, jumped and yelled.

Rybakina’s miscues mounted. A volley into the net tape with the full court wide open. A netted forehand after Jabeur barely got a short return in. When another forehand went awry, Jabeur broke at love to take the opening set and threw an uppercut as she walked to the sideline. 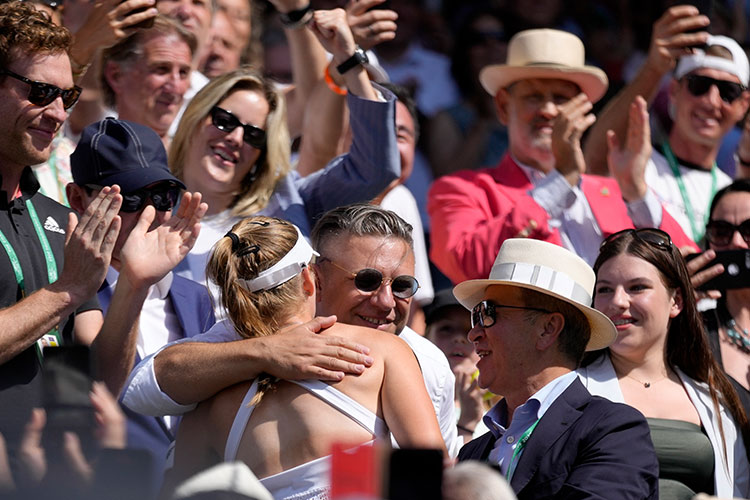 This would not be a runaway victory, though. Rybakina steadied and her serving grew more effective. Jabeur began to have trouble using all of her creativity.

As Jabeur’s forehand became increasingly problematic, Rybakina got her serve and groundstrokes going in the second and third sets. 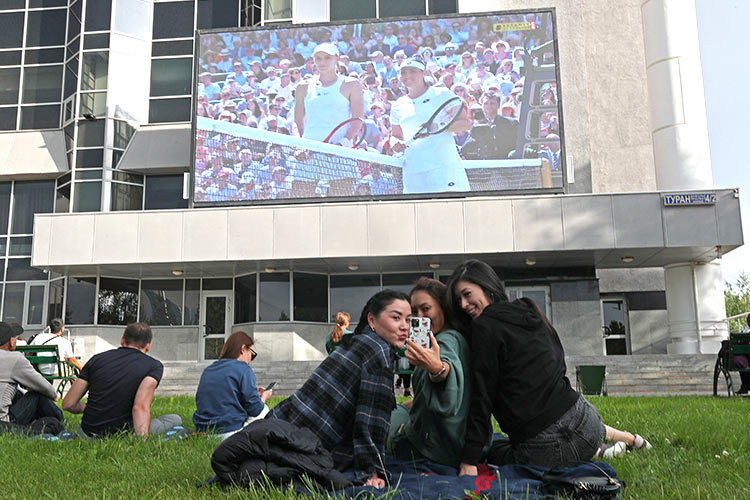 Rybakina, who beat Serena Williams at last year’s French Open, finally earned her first break chance to begin the second set and went up 1-0 when Jabeur missed a forehand. After saving four break points over her next two service games, Rybakina broke again and soon led 5-1.

Jabeur leads the women’s tour with 13 victories in three-setters this season, but it Rybakina came out far stronger in the decider this time. She broke once more to begin the third, and went up 3-1. 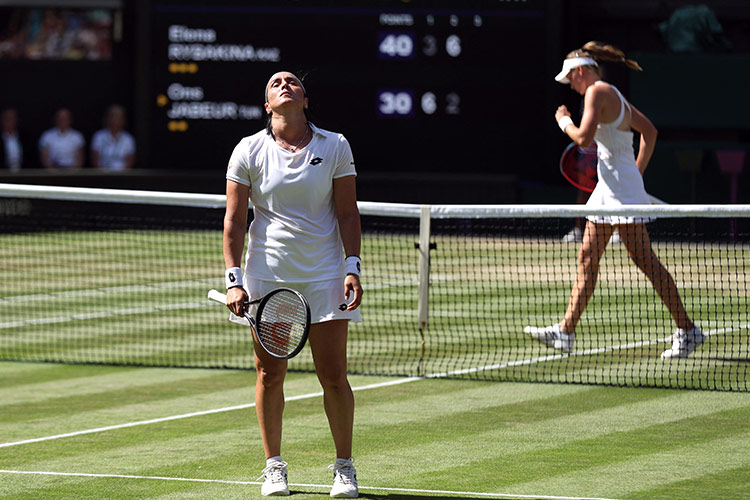 Jabeur needed to find a way to cut down on her mistakes; on the forehand side alone, she lost 15 points – 10 via forced errors, five via unforced.

Jabeur appeared to give herself an opportunity to really change the course of things while down 3-2 in the third. She parlayed a pair of points she won via a drop shot and a lob into love-40 on Rybakina’s serve.

But Rybakina erased that trio of break points and took the game, aided by a couple of 119 mph serves. That hold made it 4-2, and Rybakina quickly broke again. Now she was just a game away from the biggest victory of her career – and she got to serve for it. 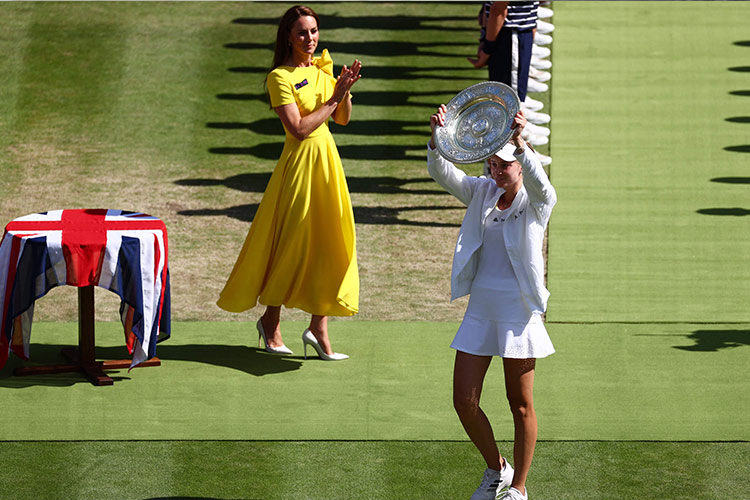 When one last serve drew a missed return off Jabeur’s racket, Rybakina seemed to sigh, before breaking into a little smile.

Not long after, she climbed over the front-row wall to make the trek through the stands for celebratory hugs with her team.