Moamen Zakaria is being cheered by Liverpool players.

The former Egyptian national team player and Al-Ahly club, Moamen Zakaria, appeared in the Liverpool room after winning the FA Cup, where the players celebrated with him and gifted him the cup.

Liverpool star Mohamed Salah invited his compatriot Moamen Zakaria to attend the match, as he is currently in Britain for treatment of a rare disease, amyotrophic lateral sclerosis.

A picture spread of Mohamed Salah celebrating with Spaniard Thiago Alcantara is also doing the rounds on social media.

He wore a mask depicting the Egyptian star, so that the image spread widely.

Liverpool crowned its second title this season and kept its hopes in the historic quartet when it won the FA Cup for the eighth time in its history by beating Chelsea 6-5 on penalties (original and extra time 0-0) in the final match of the 144th edition at Wembley Stadium in London. 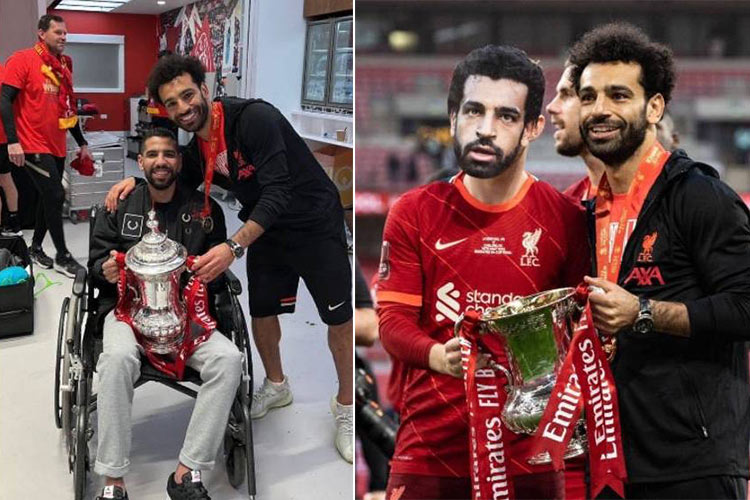 Moamen Zakaria and Salah with the trophy. Thiago Alcantara wearing the Salah mask.

Jurgen Klopp urged Liverpool to give one last push for the quadruple after they beat Chelsea on penalties in the FA Cup final to keep their history bid alive.

Klopp’s side won 6-5 in the shoot-out following an enthralling 0-0 draw after extra-time at Wembley on Saturday.

Having already beaten Chelsea on penalties in the League Cup final in February, Liverpool remain in contention to become the first English team to win all four major trophies in a single season.

The Reds face Real Madrid in the Champions League final in Paris on May 28 and still have an outside chance of catching Premier League leaders Manchester City.

Liverpool are three points behind City with two games left for both teams.