Launched in 2017, Manchester City Abu Dhabi Cup will be back for the first time since 2019 with the aim of developing and inspiring young football players in the region.

Launched in 2017, the youth tournament has grown in stature over the years, attracting global interest with participation from 13 countries representing four continents, over 1,750 players (including Manchester City FC academy players from the UK) and 4,000 spectators.

In 2018, the Manchester City Abu Dhabi Cup also launched a new girls’ category, which will return for the upcoming 2023 edition.

The tournament will be held over the weekend of Feb.18-19, 2023 at Zayed City Sports Stadium, an iconic landmark in Abu Dhabi and the largest multi-purpose sports venue in the UAE.

Off the pitch and away from the action, families will be able to enjoy live entertainment and fun activities in the ‘City Village’.

The age categories for the 2023 tournament will be: 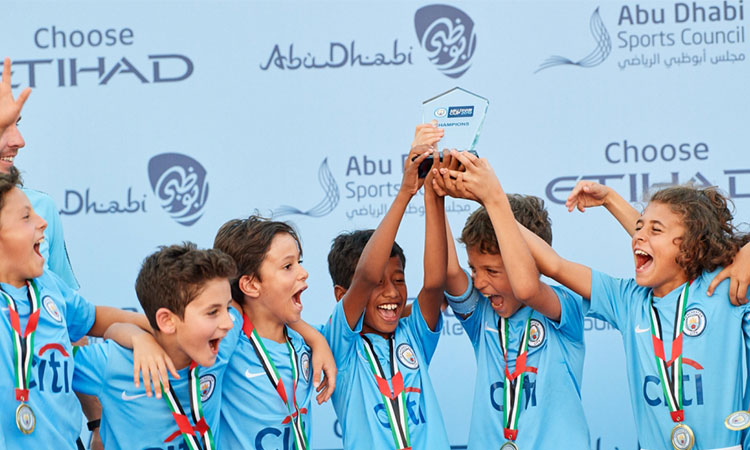 “Football tournaments in the capital city are essential to ensure the growth, further development and improvement of the football landscape in the UAE. We are very excited to see the Cup competition return in 2023 and are looking forward to welcoming teams from the region competing alongside youth Abu Dhabi football clubs.”

Simon Hewitt, Senior Manager, Football Operations Mena — Football Education said: “We can’t wait to see so many young footballers playing with a smile on their faces and having fun at the Manchester City Abu Dhabi Cup in February 2023. The tournament returns and promises to be a fantastic experience for all involved, from players to families and the coaches.”

“The tournament caters for all levels of abilities with day two ending in a selection of finals for the City Cup, City Plate, City Trophy and City Shield all up for grabs, with one lucky team winning an all-expenses paid trip to the City Football Academy in Manchester.”

Saleh Mohamed Saleh Al Geziry, Director General for Tourism at the Department of Culture and Tourism – Abu Dhabi, said: “Inspiring the next generation of sports stars and sharing Abu Dhabi with the world are among the key goals of DCT Abu Dhabi, so we’re thrilled to support the Manchester City Abu Dhabi Cup and showcase our world-class sporting infrastructure and partnerships.

“We look forward to welcoming players and families from near and far to experience Abu Dhabi at their own pace, whether it’s the excitement of theme parks, inspiring cultural attractions or getting some well-earned, private R&R at some of the best beaches and hotels in the world.”