Lionel Messi, Neymar, Kylian Mbappe and Marquinhos with children at a kids soccer clinic during the team’s tour of Japan, in Tokyo, on Monday. AFP / AP / Reuters

Lionel Messi, Neymar and Kylian Mbappe drew gasps from a crowd of thousands in Tokyo on Monday as Paris Saint-Germain held the first training session of their Japanese tour

About 13,000 fans turned up at Tokyo’s Chichibunomiya rugby ground to watch an open session and were treated to an hour and a half of tricks and flicks from PSG’s star attacking trio.

The crowd erupted in cheers as the team trotted out to jog around the pitch and the players’ every touch was greeted with loud squeals.

Security guards were even called into action when several fans invaded the pitch once the session was over.

“Ligue 1 teams don’t usually come to Japan — they usually go to China,” he said, adding that he had been a fan of PSG since Brazilian Leonardo joined them from Japanese club Kashima Antlers in 1996.

“It’s great that they have come here after the pandemic — I think it might be the first and last time,” he said. 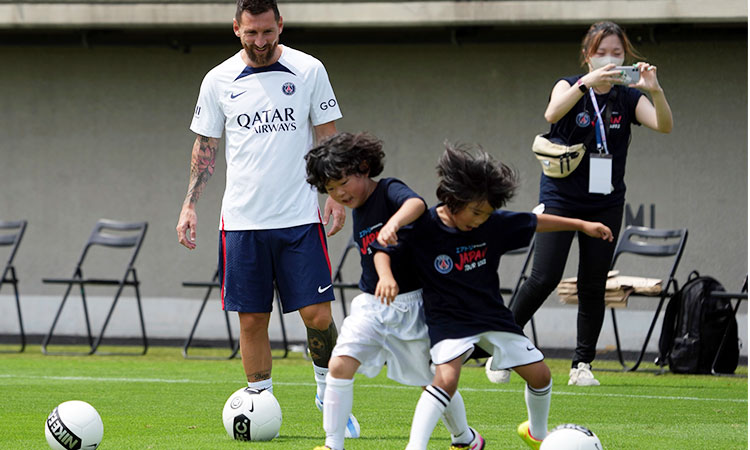 Nine-year-old Aoma Oura said he could not decide whether Messi or Mbappe was his favourite player. “My son plays football and we’ve been fans for a while,” said his 36-year-old father Kazuya.

They will also play Urawa Reds in Saitama on July 23 and Gamba Osaka in Osaka on July 25. 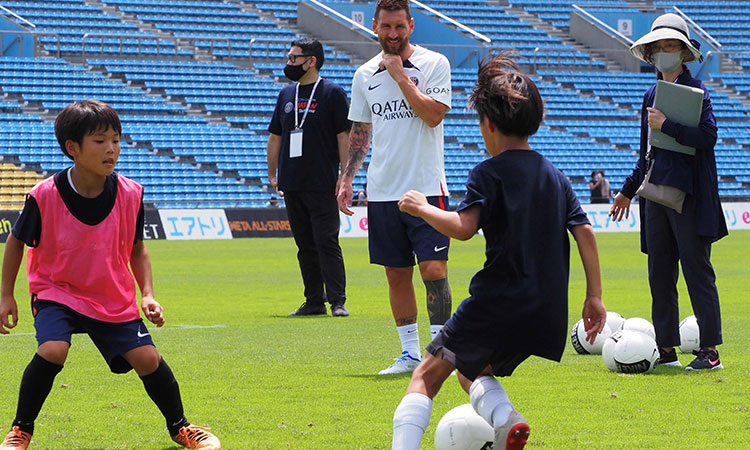 Lionel Messi looks on at young participants during a soccer clinic at a stadium in Tokyo. AFP

PSG held a football clinic for children in Tokyo on Monday morning, with Sergio Ramos and Marquinhos joining Mbappe, Neymar and Messi on the pitch.

Some of the children asked the players questions after the session had finished, with one asking Messi what skills it was important to learn as a child.

“First of all, the most important thing at that age is to enjoy yourself,” said the Argentine. “Of course, it’s good to practise and work hard to improve your skills, but it’s important to have fun.”