Meanwhile, No.3 seed Iga Swiatek of Poland won her ninth consecutive match — all coming at WTA 1,000 events — with a 6-1, 6-0 dismissal of No.25 seed Madison Keys of the United States in the BNP Paribas Open quarterfinals on Wednesday evening.

The 35-year-old Spaniard, who won a record-setting 21st Grand Slam title at the Australian Open in January and lifted the trophy in Acapulco last month, stayed on track for a fourth title in the California desert. But he had all he could handle from the 2.11m tall American, including a raft of serves that topped the 140mph mark and had Nadal’s back against the wall — literally.

“I can’t say it’s a dream because I even couldn’t dream about that three months ago, two months ago,” Nadal said. “I am just enjoying every single moment.”

Last year, Nadal’s playing time was interrupted by COVID-19 and injuries, creating doubt about the Spanish star’s ability to recover well enough to maintain his exacting standards. But he won his record 21st Grand Slam title at the Australian Open in January and has continued on a tear.

“I am just very happy to be playing tennis,” said Nadal, who turns 36 in June. “Today was a little bit worse than other days. It’s true that the last couple of days the foot has been bothering me a little bit more.”

“I manage it so-so,” he said of Opelka’s serve, which the Spaniard stood as far back in the court as possible to receive.”I don’t know if the cameras can follow me like 10 metres behind the baseline.”

Opelka saved the only break point of a tense first set. A patient Nadal worked the rallies in the tiebreaker and after he gained a 4-3 lead Opelka produced three straight errors to surrender the set. Impervious on his own serve in the opening set, Nadal gave Opelka a break chance with a double fault in the fifth game of the second and the American pounced on it. 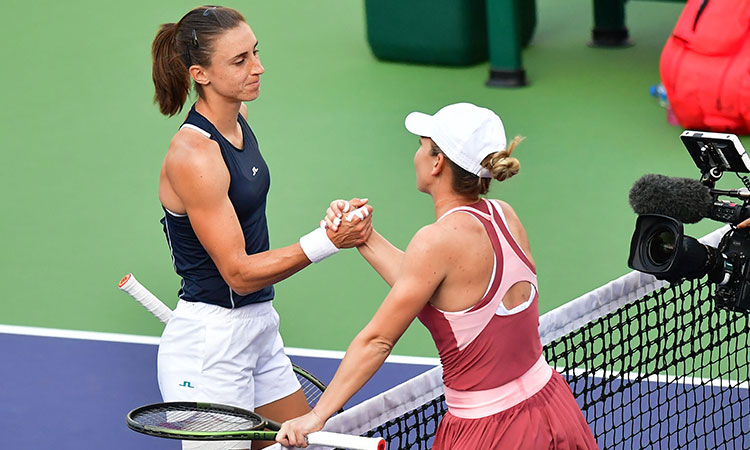 Simona Halep shakes hands with Petra Martic at the net after winning their quarter-final match. AFP

Unable to take advantage of a break point in the next game, Nadal saved three more break points in the seventh game before breaking back to knot it at 4-4. Nadal roared ahead in the second set tiebreaker, and after Opelka saved two match points with thundering serves the Spaniard finished it off with a winner.

In women’s action, former world number one Simona Halep and third-seeded Ita Swiatek booked a semi-final showdown with a pair of lopsided victories.

Poland’s Swiatek swept past American Madison Keys 6-1, 6-0 in 56 minutes. It was a welcome chance of pace for Swiatek, who had to rally from a set down in each of her first three matches.

Alcaraz, into his first Masters 1,000 quarter-final, is the youngest Indian Wells ATP quarter-finalist since 17-year-old Michael Chang in 1989. Alcaraz, winner of the title in Rio de Janeiro last month, gradually ramped up the pressure with a powerful ground game, converting his third break chance in the opening set with a forehand winner. 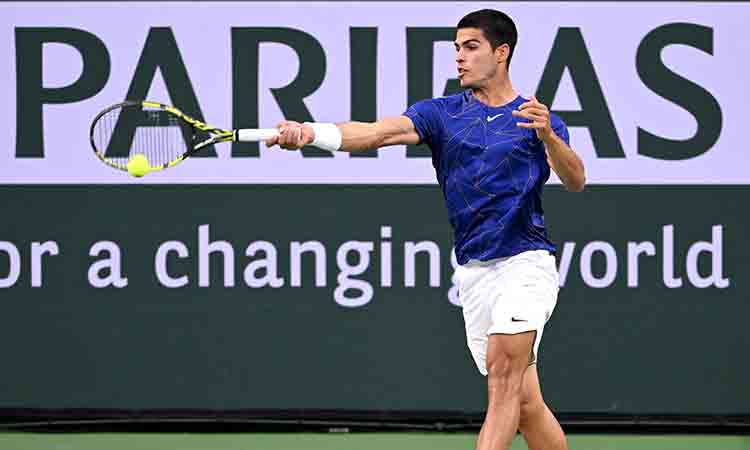 He didn’t face a break point in the match, and gained an early edge in the second set with a deft drop shot that caught Monfils flat-footed behind the baseline.

Monfils, who captured a title in Adelaide in January, had upset world number one Daniil Medvedev in the third round, but his tournament ended with a whimper as he was broken for the fourth time of the night in the final game. Should they both advance Alcaraz would meet his idol, Nadal, in the semis.

“It would be amazing, but first I have to win quarter-finals,” said Alcaraz, who next faces defending champion Cameron Norrie. Norrie quashed a second-set rally bid from rising US talent Jenson Brooksby, who took a 3-0 lead in the second set only for Norrie to charge back to win 6-2, 6-4. Berrettini bounced In other matches, Serbia’s 61st-ranked Miomir Kecmanovic shocked sixth-ranked Matteo Berrettini 6-3, 6-7 (5/7), 6-4 to book a quarter-final clash with American Taylor Fritz, who edged Australian Alex de Minaur 3-6, 6-4, 7-6 (7/5).

The 22-year-old Kecmanovic equalled the biggest win of his career as he reached the last eight of a Masters level event for the second time. Seventh-seeded Andrey Rublev, chasing a third title of the year, made it safely through, beating Poland’s Hubert Hurkacz 7-6 (7/5), 6-4 to set up a clash with Bulgarian Grigor Dimitrov — a 6-3, 7-6 (8/6) winner over American John Isner.

Jafza contributing significantly to the progress of automotive sector