Neeraj Chopra competes and celebrates in the men’s javelin throw final during the World Athletics Championships at Hayward Field in Eugene, Oregon, on Saturday. AFP / Reuters

This was India’s second medal at the World Championships and the first podium finish since long jumper Anju Bobby George won a bronze medal at Paris in 2003.

Neeraj Chopra’s best effort of 88.13m in the final at the Hayward Field was short of Anderson Peters’ gold medal-winning mark of 90.54m while Tokyo 2020 silver medallist Jakub Vadlejch won the bronze with 88.09m. The 24-year old Chopra had earlier made the cut for the final courtesy an 88.39m mark in the qualification.

Neeraj Chopra elated from his performance and said that there is a hunger inside him to win gold in next edition of worlds competition. 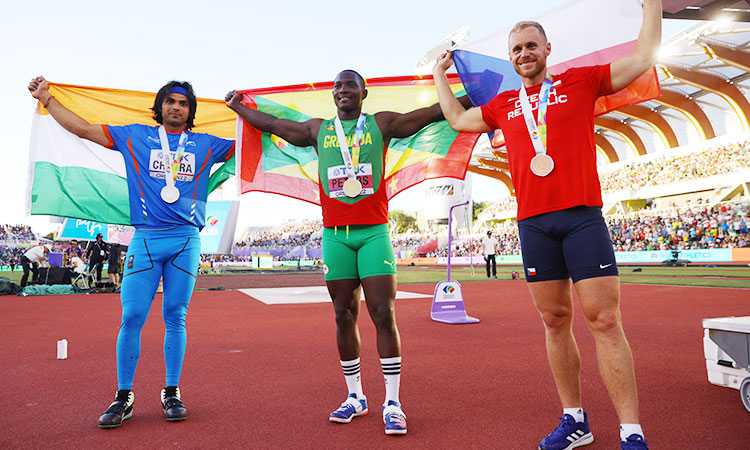 The 24-year-old Indian further said, one cannot get gold each time but he will focus and concentrate on training and improvement in order to win the yellow medal in next year’s World Championships.

“An athlete cannot win a gold every time but we have to keep trying and give our best. I have learned a lot from the challenging situation today, and I will work for improvement,” Chopra said.

When asked to whom he would dedicate the silver medal, the star athlete said, “Anju Bobby George madam won India’s first medal? Everybody who has played a part in my success and those who are praying for my success, I would like to dedicate to them.”

Neeraj also mentioned that he spoke to Pakistani athlete Arshad Nadeem who finished fifth with a best throw of 86.16m.

“I spoke to him after the end of the event and told him that he had performed well. He said he had problems with his elbow. He was not doing well at the start so I told him he made a good comeback,” he said.