The Netherlands sent South Africa crashing out of the Twenty20 World Cup on Sunday with a stunning 13-run victory in Adelaide which also propelled India into the semi-finals.

The latest in a series of shocks at this tournament left Bangladesh and Pakistan fighting it out for the final spot in the last four.

Table-toppers India are on six points and play Zimbabwe in Melbourne in the final match of Sunday’s triple header, the result of which will decide the final Super 12 standings and who faces whom in the semis.

“Hard one to swallow. We had the confidence and belief in ourselves as a unit to make the play-offs,” said South Africa skipper Temba Bavuma.

“Unfortunately for us, we couldn’t do it. Winning the toss and bowling, what they got wasn’t ideal. 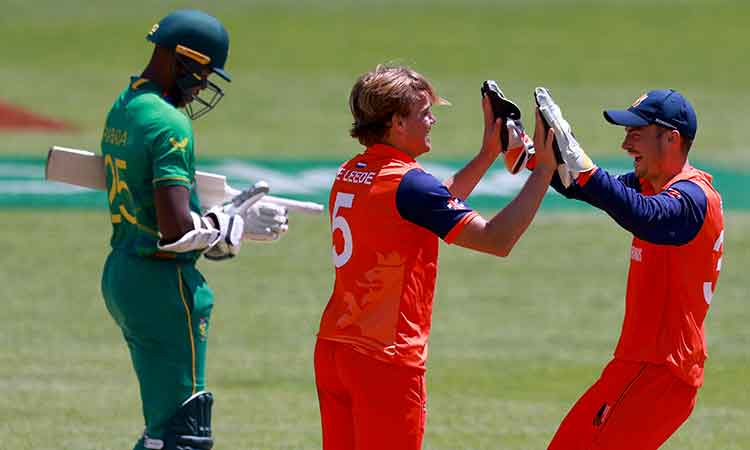 “We lost wickets at crucial times. They used the dimensions of the field a lot better than we did.”

South Africa started their reply on a jittery note with openers Quinton de Kock and Bavuma out inside six overs with the score on 39.

The left-handed de Kock hit a four and six but soon fell caught behind to Fred Klaassen, for 13, and Bavuma was bowled by Paul van Meekeren for 20.

But it was Glover’s wicket of Rilee Rossouw that raised the Dutch hopes with the batsman, who hit the first century in this tournament, departing after a 19-ball 25.

The Proteas never looked convincing as Klaassen took down Aiden Markram for 17 and a Dutch shock started becoming a reality when Glover struck twice in one over.

He sent back the dangerous David Miller for 17 and then got Wayne Parnell caught behind for nought as the wheels came off the South Africa chase — and with it their World Cup hopes. 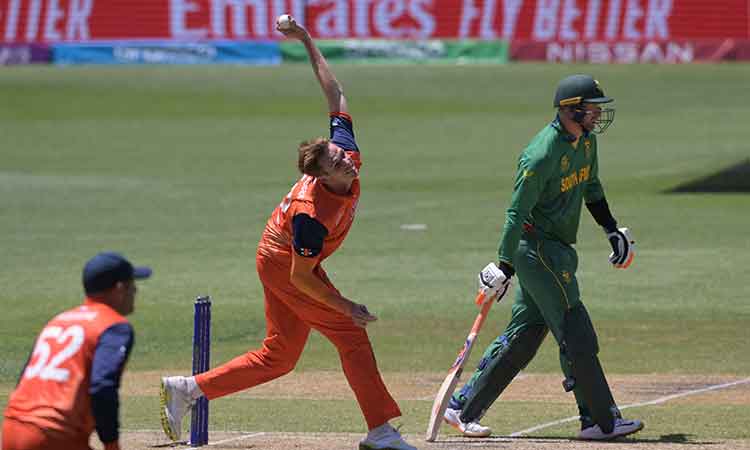 Netherlands’ Fred Klaassen bowls during the match against South Africa at Adelaide Oval on Sunday. AFP

Put in to bat first, the Dutch, who had only beaten Zimbabwe in the Super 12, started strongly with Stephan Myburgh’s 37 but lost their way. But then stepped in Ackermann.

He smashed three fours and two sixes in his 26-ball knock and along with skipper Scott Edwards helped the team get 31 runs from the final two overs.

“Lost for words,” said Edwards after the Dutch pulled off another stunner.

“It’s definitely up there, another big upset for Netherlands in a World Cup.”

“Boys worked really hard. Come in, and take it deep, and the boundaries flowed at the end.”