Ben Stokes poses with Kane Williamson and the series trophy ahead of first Test at Lord’s on Wednesday. Reuters

New England captain Ben Stokes said he wanted everyone in the side to “feel free” under his leadership as James Anderson and Stuart Broad were recalled for the first Test against New Zealand at Lord’s starting on Thursday.

Stokes has taken over as skipper from Joe Root, with England on a woeful run of one win in 17 Tests.

But the all-rounder told reporters at Lord’s on Wednesday: “There’s been a lot of talk about a ‘reset,’ which is a word I don’t like. “I just see it as a completely blank canvas. “I just want everyone to feel free under my captaincy.

“This is our time and we are going to dictate how things go forward. Everyone is starting fresh.”

Anderson, 39 and Broad, 35, England’s two most successful bowlers of all time, with a combined 1,177 wickets between them, were both controversially left out of the squad for a 1-0 series loss in the West Indies earlier this year. 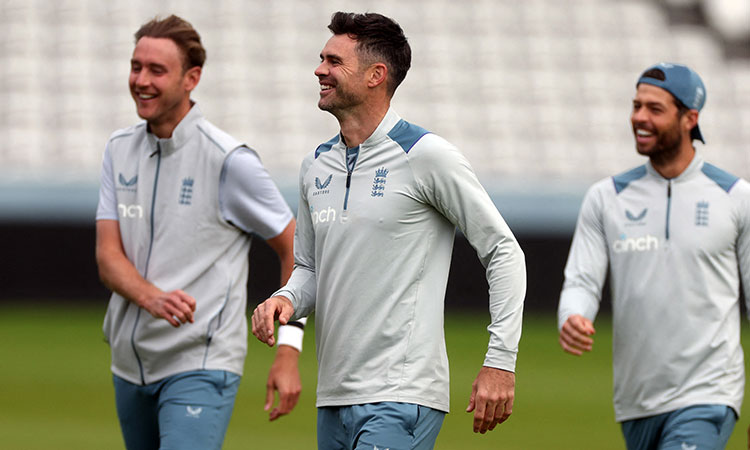 But they return for the first match under England’s new leadership duo of Stokes and coach Brendon McCullum, the former New Zealand captain, in an XI named on Wednesday — a day ahead of schedule.

England have also given a debut to fast bowler Matthew Potts, a county colleague of Stokes at Durham.

The 23-year-old has been selected on the back of a fine start to the county season, having taken 35 wickets for Durham in his opening six County Championship matches.

“He’s been outstanding in the games I’ve played,” said Stokes of Potts. “It’s not been all plain sailing for bowlers and he’s created things out of nowhere.”

England had previously removed some of the doubt surrounding their side for this opening match of a three-Test series by indicating Jonny Bairstow would bat at number five, with Ollie Pope pencilled in at first-wicket down.

That means the in-form Harry Brook, a Yorkshire colleague of Bairstow, must wait for his Test debut.

Brook has scored 840 runs at a colossal average of 140 so far this campaign but has been unable to find a place in a familiar-looking top six.

That success came just over a week after tourists New Zealand had wrapped up a 1-0 win in a two-Test series away to England.

New Zealand captain Kane Williamson, also speaking at Lord’s on Wednesday, did not announce his XI but confirmed top-order batsman Henry Nicholls had been ruled out with a calf strain. Nicholls’s place will be taken by Daryl Mitchell.

“We need to look at the surface in terms of our bowling make-up,” said Williamson. “He (Boult) needs to get through training today, obviously he’s just arrived.

“He’s keen as but there are a number of things to consider. He’s a world-class player but we’ve got great variety in our bowling attack.”