Novak Djokovic won a seventh Wimbledon title and 21st Grand Slam crown on Sunday with a four-set triumph over Nick Kyrgios, whose challenge unravelled in frustration after a blistering start.

The 35-year-old Serb is now one Slam ahead of Federer in the all-time race and just one behind Rafael Nadal’s record of 22 majors.

“I’m lost for words for what this tournament and this trophy means to me,” said Djokovic. “It always has been and will be the most special one in my heart.” 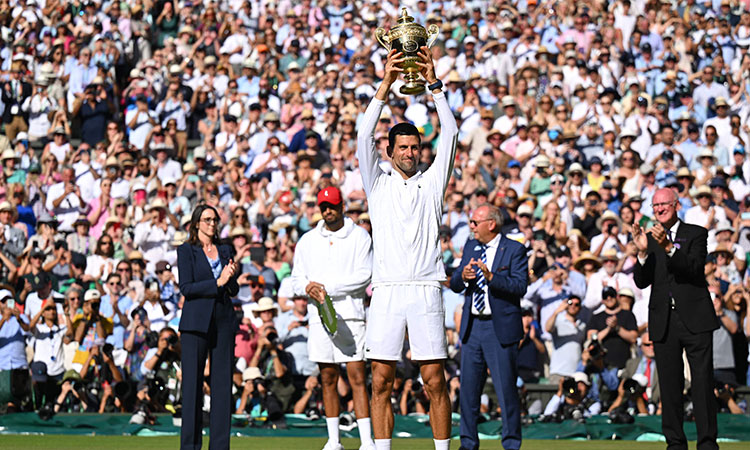 Djokovic also praised Kyrgios after their once-frosty relationship thawed at Wimbledon. “It’s officially a bromance,” he declared. “It is tough to find consolation words at a moment like this but you showed why you are one of the best players in the world.”

Djokovic is just the fourth man in the Open era to win four successive Wimbledon titles after Bjorn Borg, Sampras and Federer. Kyrgios said the Serb was “a bit of a god.”

“First of all congratulations to Novak and your team, you’ve won these championships that many times I don’t even know any more.” The 40th-ranked player said he was “exhausted.” “I’m really happy with this result and maybe one day I’ll be here again but I don’t know about that.”

Djokovic had endured a difficult year at the Slams. His deportation from Australia over his coronavirus vaccination status was followed by a quarter-final loss to Nadal at the French Open. 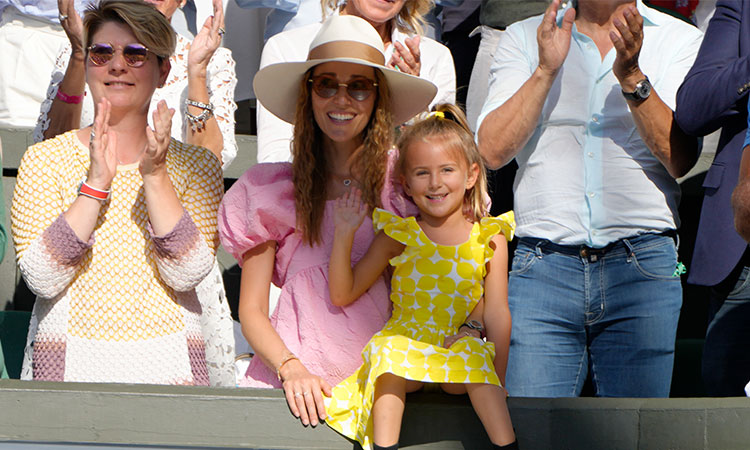 His refusal to get vaccinated will bar him from flying to the United States next month for the US Open as things stand. Djokovic could also miss the 2023 Australian Open as a consequence of having his visa cancelled in January.

“He is heroic,” said coach Goran Ivanisevic. “It was not easy to digest all those things and come back to play tennis.” Kyrgios was seen yawning at the top of the All England Club stairs as the players made their way onto Centre Court.

But there was no lethargy when the final began as Djokovic, playing in a men’s record 32nd Slam final, was blown off court by his 27-year-old opponent making his maiden bow.

Kyrgios raced through the first set, breaking in the fifth game and taking the opener with his seventh ace of the contest. 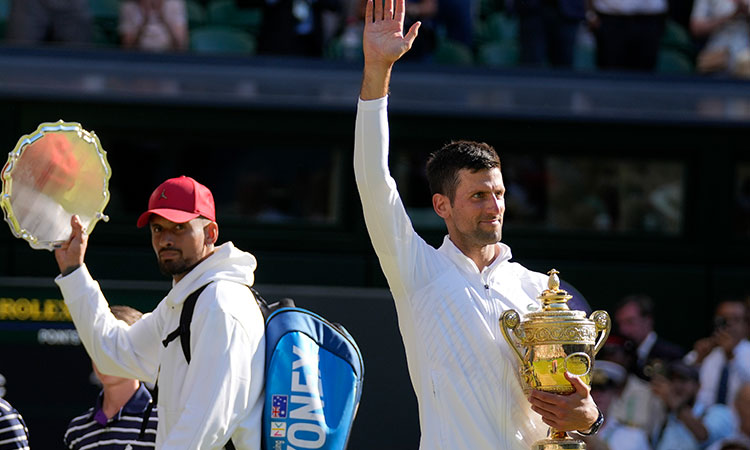 Novak Djokovic (R) holds the winners trophy as he celebrates after beating Nick Kyrgios (L) to win the final. AP

Along the way, he showcased one underarm serve, a “tweener” and impeccable behaviour. Djokovic, renowned as the best returner in the game and undefeated at the tournament since 2017, managed to win just five points off the Kyrgios serve.

It was the third match in a row at this Wimbledon that the 35-year-old had dropped the first set. Djokovic won a lung-busting 23-shot rally in the third game of the second set and immediately broke for a 3-1 lead. It was the cue for Kyrgios’s first dark mutterings of the afternoon.

Kyrgios then saw four break points slip away as Djokovic levelled the final by taking his first set off the Australian in three meetings. Kyrgios saved two break points in the opening game of the third set.

There was a brief stoppage in play when a protestor was ejected from the stadium for shouting ‘Where is Peng Shuai?’ in reference to the welfare of the Chinese women’s tennis star. 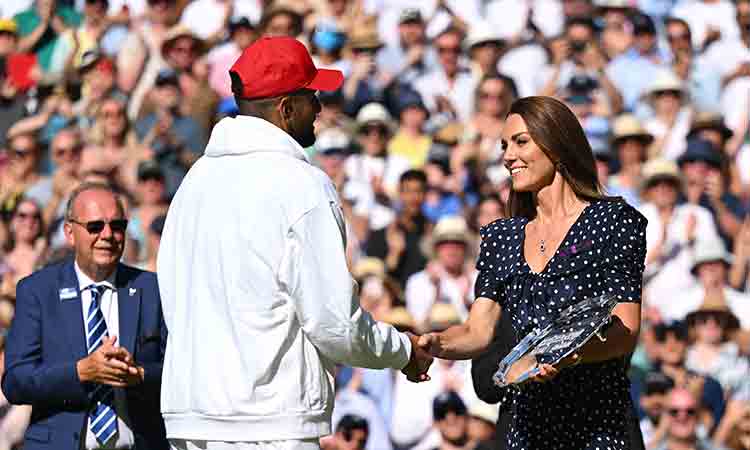 Kyrgios was further unsettled when he demanded a fan be removed from the crowd for distracting him in his serve. “It’s the woman who looks as if she’s had 700 drinks, bro,” he told umpire Renaud Lichtenstein.

His afternoon threatened to unravel completely when he was broken from 40-0 up in the ninth game, fuming and swearing loudly at his team in the player’s box.

Djokovic, with only two unforced errors, happily pounced for a two sets-to-one lead. As Kyrgios continued to remonstrate with himself and his supporters, Djokovic strolled to victory, wrapping up the title with a convincing tiebreak.

Djokovic was reminded at the post-match presentation that he had promised to buy Kyrgios dinner if he won the title again. “Yeah, that’s why he lost!” joked the champion.