The countdown is on to UFC280 taking place on October 22, at the Etihad Arena, Yas Island, Abu Dhabi — and the anticipation continues to build.

The card is stacked from head to toe with huge match-ups, including two title fights, no fewer than 13 top-10 ranked fighters, and several bouts which can shape the future of their respective divisions, and the lightweight division is one of them.

Headlining the card will be a fight for the vacant 155lbs world title, which will see Brazil’s Charles Oliveira take on Islam Makhachev from Dagestan.

Oliveira has arrived in Abu Dhabi ahead of the anticipated title bout against Makhachev.

He reached the UAE on Sunday. Oliveira is the former lightweight champion, having had the title stripped after missing weight ahead of his last fight against Justin Gaethje. Number one ranked Oliveira (33-8-1nc) went on to win that fight, and now has the chance to reclaim his crown in Abu Dhabi. 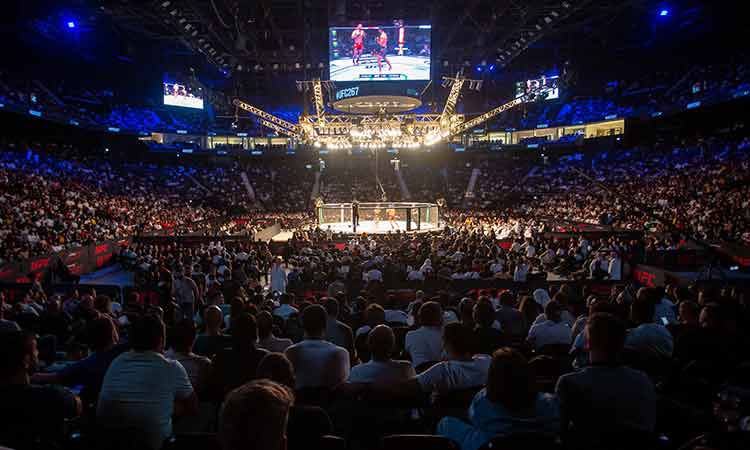 UFC280, the promotion’s return to the capital for the first time since UFC 267 last October. Supplied picture

Oliveira has not been to these shores before but will bring him records for the most finishes (19) and submission wins (16) — and once he takes on Makhachev will have, incredibly, fought all other top-five lightweights, in just 18 months.

Standing in his way is Islam Makhachev (23-1), currently ranked fourth in the division and riding a dominant 10-fight win-streak dating back to 2015. Presenting a huge opportunity for the Dagestan fighter, a teammate of Khabib Nurmagomedov, and someone familiar with fighting in the UAE capital.

Also on the main card is a fascinating encounter between Beneil Dariush and Mateusz Gamrot. Dariush (21-1-4) brings with him regional interest as he was born in Iran, and has steadily climbed the ranks of the lightweight division, amassing a seven-fight win-streak, getting to number six in the rankings.

A win in Abu Dhabi would push his credentials for a top-five spot as he looks to be in the conversation for a title shot.

Initially, Oliveira wanted to be a professional footballer, but at the age of seven he fell seriously ill.

He suffered from body pains, faced difficulty in walking, and at times was unable to move his legs at all. He was diagnosed with a heart murmur and rheumatic fever, which affected his ability to walk.

These issues meant there were real concerns he could become paraplegic. Despite the challenges, Oliveira took up Brazilian jiu-jitsu, which paved his way into the world of MMA.

At the age of 12, Oliveira was introduced to Brazilian jiu-jitsu (BJJ). Since Oliveira came from a low- income household, his BJJ coach offered him free classes as part of a school programme. The future lightweight champion and his family sold snacks and waste cardboard on the streets to raise money to purchase the necessary equipment. He began his training in 2001 and won his first major title as a white belt in 2003. Oliveira earned his black belt in Brazilian jiu-jitsu in 2010.

In December 2008, Oliveira had his debut lightweight fight against UFC’s Mehdi Baghdad and came out victorious. Over the following months, Oliveira won several other fights and in January 2010 he was named as the third-best Brazilian prospect to watch. In his first official UFC fight, he defeated Darren Elkins via submission in 45 seconds in the first round and was awarded the ‘Submission of the Night’ award.

As of today, Oliveira is ranked No.1 in the UFC lightweight category and sits at No.3 in the UFC men’s pound-for-pound rankings.

Seen as one of the most down-to-earth fighters in the sport, Oliveira has always stayed true to his roots. Following a victory against Tony Ferguson during UFC 256: Figueiredo vs. Moreno, the fighter confirmed that he is a champion outside the ring as well. Oliveira donated large amounts of non- perishable food to the community of Prainha in Guarujá, Brazil – the city in which he was born.

Oliveira also runs a social project of his own. Dedicated to the children in Guaruja, he launched a programme to keep them away from a life of crime and encouraged them to join the gym to learn combat sports.