Reigning Australian Open champion Naomi Osaka blasted her way past Germany’s Andrea Petkovic to reach the semi-finals in Melbourne on Friday and Rafael Nadal advanced via a walkover in tune-up tournaments ahead of the year’s first Grand Slam event.

It was only one day after Nadal played and won his first competitive match in five months, beating Ricardas Berankis in straight sets. Nadal will play unseeded Emil Ruusuvuori on Saturday for a place in the final. Ruusuvuori beat Alex Molcan 6-2, 6-1. 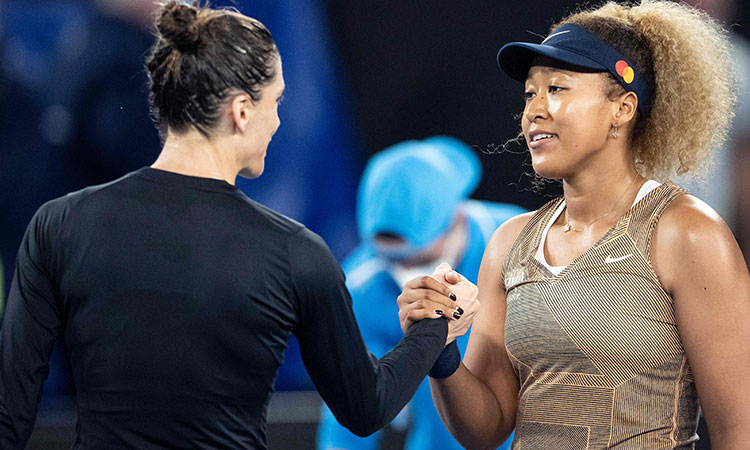 The Japanese star Osaka raced through the opening set in just 26 minutes, but was pushed harder in the second before beating Petkovic 6-1, 7-5 to set up a semi-final against third seeded Russian Veronika Kudermetova. Kudermetova beat fellow Russian Anastasia Potapova 6-2, 4-6, 6-0 to book her place in the semi-finals.

Osaka was in imperious form in the first set, smashing winner after winner from both sides, racing to a 5-0 lead before Petkovic was at last able to hold serve. When Osaka broke Petkovic in the opening game of the second set it looked like an early night for the four-time Grand Slam champion. However, Petkovic lifted her game as Osaka’s dropped slightly and the German fought back to skip away to a 4-2 lead. But Osaka fought back and levelled the set, then broke at 5-5 before comfortably closing out the match.

Osaka said falling behind in the set to someone who was playing better than her was good preparation ahead of this month’s Australian Open. Halep in semis

Earlier, two-time Grand Slam champion Simona Halep laboured into the last four to stay on track for a final showdown with Osaka. The former world number one, whose season was blighted by injury last year, overcame Switzerland’s Viktorija Golubic 6-2, 5-7, 6-4 on Rod Laver Arena, but it was a hard slog. “It was really difficult I have to admit,” said Halep, who missed Roland-Garros, Wimbledon and the Olympics last year with a calf injury and ended her season early due to a knee issue. 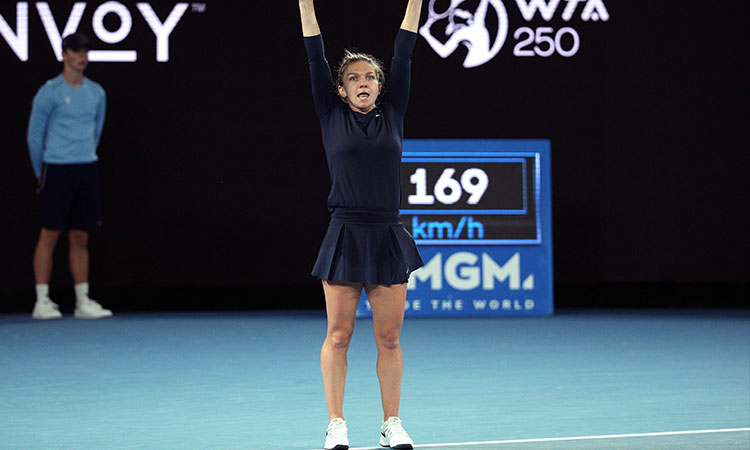 Simona Halep reacts to winning over Viktorija Golubic of Switzerland in Melbourne on Friday. AP

She was in charge in the first set but her killer instinct deserted her in the second, broken when serving for 5-3 then again when serving for the match, racking up 23 unforced errors. They traded breaks in the third set until Halep dug deep, saving four break points in the seventh game then breaking in the ninth to clock a tough win.

Now ranked 20, she will play Zheng Qin-wen in the last four after the 126th-ranked Chinese player upset Croatia’s Ana Konjuh 7-6 (7/1), 7-6 (8/6). There are two simultaneous WTA events being run as part of the Melbourne Summer Set. At the other event, American Amanda Anisimova came through a tough test against Romania’s Irina-Camelia Begu 2-6, 6-3, 6-3 to set up a last-four clash against 26th-ranked Russian Daria Kasatkina who beat Spain’s Nuria Parrizas Diaz 7-5, 6-1.

Barty was in superb form as she saw off world number 12 Kenin in just 68 minutes of quality tennis. The 25-year-old Australian served beautifully, winning 31 of 32 points on her first serve and nine of 16 on her second, not giving Kenin any opportunities to break.

By contrast, Kenin’s serve was not nearly as effective and while she was only broken once in each set, she struggled to hold throughout. Her semi-final opponent is in-form Iga Swiatek, who beat former world number one Victoria Azarenka 6-3, 2-6, 6-1. Swiatek, who won the French Open in 2020 as a 19-year-old, has also been in great form this week.

She took the first set comfortably and although she dropped the second as Azarenka picked up her game, Swiatek stormed out to a 4-0 lead in the third and held on the take the match in just under two hours.

Seventh seed Elena Rybakina moved into the final four with a come from behind win over American Shelby Rogers. The towering Rybakina struggled on serve in the first set but recovered to win 3-6, 6-3, 6-2. She will take on Misaki Doi in the semi-finals after the Japanese veteran downed Slovenia’s Kaja Juvan 6-3, 4-6, 7-6 (7/5).

In the men’s draw, top seed Gael Monfils cruised into the semi-finals with a 6-4, 6-1 win over American Tommy Paul. He was joined in the last four by third seed Marin Cilic, who beat Slovenia’s Laslo Djere 6-3, 6-2 and second ranked Russian Karen Khachanov, who downed Egor Gerasimov of Belarus 7-5, 6-3. Agencies