Sehar Shinwari poses for a photograph.

Pakistani actor Sehar Shinwari has become the talk of the town after she tweeted about the much talked about upcoming India-Zimbabwe T20 game.

Shinwari said on twitter that if Zimbabwe beat India, she would marry a man from the African country.

The two teams will face off on Sunday Nov.6 in the T20 World Championship.

During the India vs Bangladesh game, Shiwari tweeted constantly and wished India would lose the game.

In the tweet, the actor said, ” I’ll marry a Zimbabwean guy, if their team miraculously beats India in next match.” 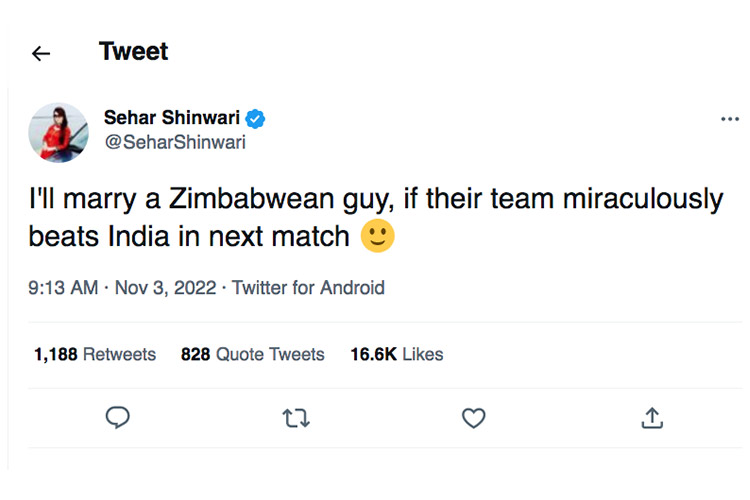 Her post has been liked by over 850 users and has received 50 retweets so far.

Cricket addicts have followed the Pakistani star, reposting her previous predictions and pointing out how wrong they were.

“So I feel sorry for you because you are going to live your whole life alone,” one user tweeted.

This isn’t the first time she made headlines for her tweets.

She made fun of Team India after they lost to Australia in the first T20 of the series.

Her tweet comes a week after Zimbabwe beat Pakistan to a run, putting them at risk of an early exit from the Twenty20 World Cup.

The excitement in Perth continued until the last minute, with Zimbabwe scoring 130-8 and restricting Pakistan at 129-8.