Pakistan’s Mohammad Rizwan bats during the match against Netherlands in Perth, Australia, on Sunday. AP

Pakistan beat the Netherlands by six wickets in Perth on Sunday for a first win at the Twenty20 World Cup which kept their faint hopes of reaching the semi-finals alive.

Netherlands captain Scott Edwards won the toss and chose to bat first but Pakistan’s new-ball bowlers kept a disciplined line to keep it to three runs from the first two overs.

Returning opener Stephan Myburgh broke the shackles with a boundary off Shaheen Shah Afridi only to fall next ball, caught at fine leg attempting another big hit to be out for six.

There was no respite from the Pakistan quick bowlers. 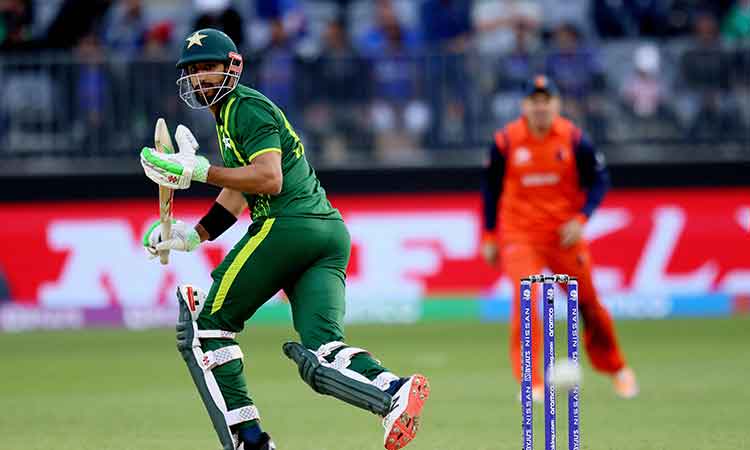 Pakistan’s Shan Masood runs between the wickets during the match Netherlands at the Perth Stadium. AFP

Mohammad Wasim took two wickets in two balls only for Paul van Meekeren to survive the hat-trick delivery, and Haris Rauf made good use of the bounce on offer.

A nasty bouncer from Rauf got through Bas de Leede’s helmet grill, forcing the batsman off the ground with a bruised cheek bone.

Shadab’s leg spin had Tom Cooper caught for one after the power play and then trapped Max O’ Dowd lbw for eight in his next over.

After crawling to 34-3 after 10 overs, and with De Leede retired hurt in six, Netherlands captain Edwards and Colin Ackermann (27) attempted to rebuild with a 35-run stand but once they were separated the wickets kept tumbling.

Shadab trapped Ackermann lbw with a quicker and flatter delivery and Edwards fell soon after, for 15, to Naseem Shah.

Van Meekeren was last to fall, run out off the final ball for seven.