Babar made 55 and Rizwan went on to 68 to help guide Pakistan past Bangladesh’s total of 173-6. Pakistan lost Babar’s wicket and another in the 13th over and had to rely on Mohammad Nawaz, who struck an unbeaten 45 from 20 balls to close out the win.

There was a flicker of concern when Rizwan holed out in the deep in the 19th over with Pakistan needing nine from seven balls. At the start of the last over it needed eight from six balls but with seven wickets in hand and Nawaz still at the crease, Pakistan was in command.

Asif Ali took a streaky single from the first ball and Nawaz played an overhead tennis shot from the second ball for two. Nawaz continued to find gaps in the field for two runs until a four behind point by Nawaz from the fifth ball of the over clinched the win. 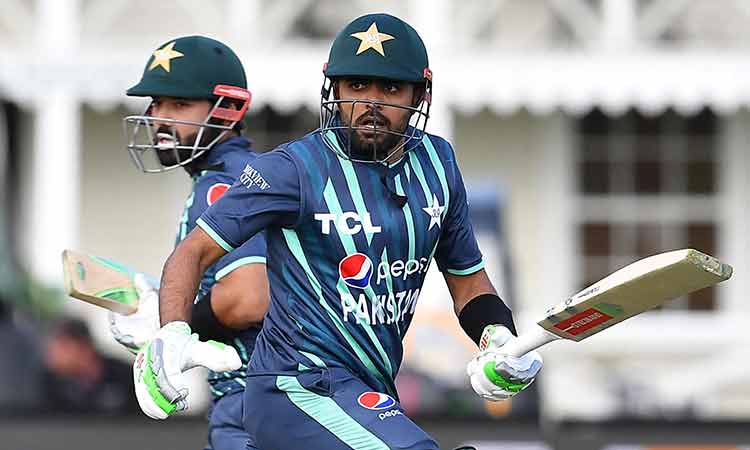 Pakistan’s Babar Azam (right) and Mohammad Rizwan run between the wickets in Christchurch on Thursday. AFP

“I think if you give a chance to the Bangladesh bowlers they don’t make it easy because they bowl very well,” Rizwan said. “You have to bat within your plan because chasing a target is always difficult and you must keep wickets in hand.

“I would give credit to Nawaz for the way he batted on this wicket. If you ask me honestly, the Bangladesh bowlers bowled extremely well but Nawaz innings was the moment that changed the whole match.”

The match was the last in the round-robin section of the tri-series and came after the tournament finalists already had been determined. Pakistan and New Zealand will meet in the final on Friday.

Bangladesh finished the tournament without a win but still picked up some momentum ahead of the Twenty20 World Cup in Australia later this month. The team’s total on Thursday was its best of the tournament and its third-best against Pakistan in a T20 international.

“I think we played our best cricket today,” Shakib said. “We could have scored maybe a few more runs in the last over. The impression we wanted to get from this series, we got that, so it’s up to us to express ourselves and do something good for the country.

“I think from a management point of view we are very clear now on the team which will play in the World Cup which is what exactly we were looking for.”