Babar Azam (bottom) celebrates with teammates after taking the catch to dismiss Usman Khawaja (C) during the first day of the Third Test at the Gaddafi Cricket Stadium in Lahore on Monday. AFP

Pakistan recovered from dropped catches to restrict Australia to 232-5 and deny Usman Khawaja a second consecutive century on Day 1 of the third and final test on Monday.

Fast bowler Naseem Shah, the only Pakistan change from the second drawn Test at Karachi, picked up 2-36 to lead a fightback in the last session after Australia won the toss and opted to bat on another slow and low-bouncy wicket.

Cameron Green was unbeaten on 20 and Alex Carey was not out on 8 when bad light stopped play two overs before the scheduled close.

“If you bowl with pace you can get reverse swing on such slow wickets and that’s what exactly I did,” the 19-year-old Naseem said after bowling 19 overs in a day. “It’s quite hot and the bowlers do get frustrated in such conditions, but you have to keep yourself calm because you have to bowl for longer periods.”

The Pakistan-born Khawaja, who scored 160 and 44 not out at Karachi and 97 runs in the opening Test draw, fell for 91 when Babar Azam plucked a brilliant one-handed shin-high catch in the slip. 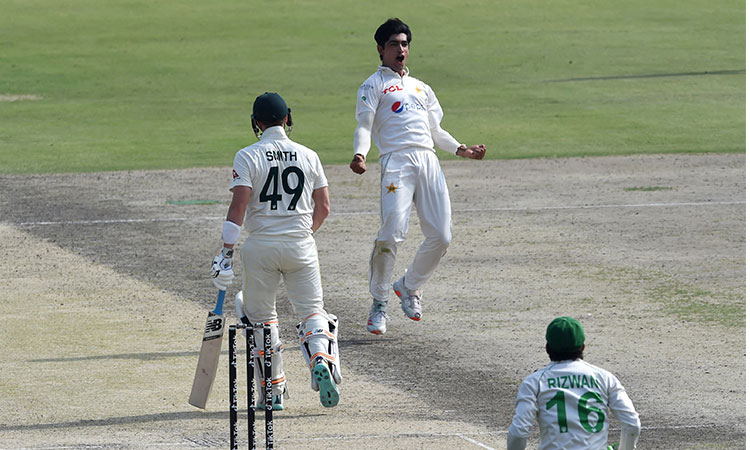 Khawaja batted for nearly 5-1/2 hours for his resilient 219-ball knock before he tried to flick off-spinner Sajid Khan (1-65) to mid-wicket. But the ball spun away sharply and took the thick outside edge of the bat.

“I was a little bit sick (and) got some medication in between the breaks,” Khawaja said. “I was just telling myself, ‘Keep going. Go as long as you can. Keep pushing through.’ … Could easily have gone harder, played a big shot, got out for 20 or 30. I felt horrible today, so it was actually a win getting 90.”

Naseem was finally rewarded for his disciplined bowling when he had Steve Smith (59) trapped leg before wicket and also found the outside edge of Travis Head (26).

Smith faced 169 balls and hit six fours before he was undone by Naseem’s delivery, which came back sharply and hit the batter’s knee in front of the stumps. 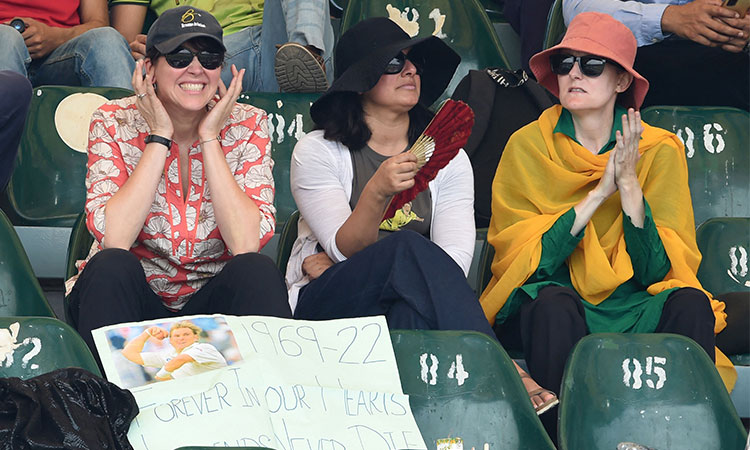 Head’s below-par series continued and despite getting a reprieve on 7 when Sajid couldn’t grab a chest-high catch of his own bowling, he couldn’t last long enough.

Khawaja and Smith had revived Australia from the early jolt of Shaheen Shah Afridi (2-39) with a 138-run stand in almost four hours before Pakistan hit back with three late wickets.

Left-arm fast bowler Afridi had picked up two wickets in his second over to cut Australia to 8-2 before Khawaja and Smith thwarted Pakistan.

Khawaja didn’t score a boundary over the first hour and also survived a sharp chance on 12 when Azam couldn’t get down in time to hold onto an edge in the slip. 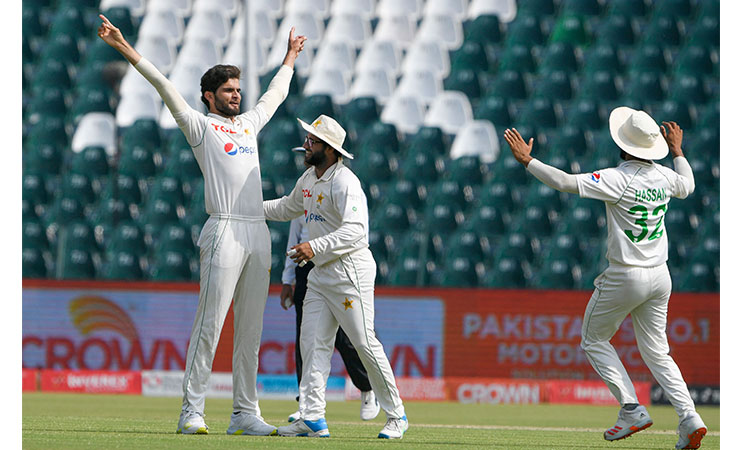 Pakistan’s fast bowlers bowled in short spells but both Smith and Khawaja negated the reverse swing on a flat wicket with mercury hovering around mid-30 degrees Celsius (95 degrees Fahrenheit).

Earlier, Smith and Khawaja led Australia’s recovery and carried the visitors to 70-2 by lunch before adding further 75 runs in the second session.

David Warner (7) was pinned on his crease by a delivery, which seamed back into the left-hander, beat the bat and struck his pads. Warner didn’t go for a television referral.

Marnus Labuschagne then got his second duck in the series when he drove recklessly in the same over and got a thin outside edge.

Pakistan went with the extra pace option in the bowling attack and included Naseem in place of all-rounder Faheem Ashraf.

Australia retained the same XI, which toiled for nearly 172 overs on the last two days of the second test but couldn’t force a win at Karachi, where Babar played a marathon innings of 196.

Australia’s historic first tour of Pakistan in 24 years has added significance going into the series decider.

No players in the starting XI have played a Test match at the Gaddafi Stadium, where Babar made his one-day international debut against Zimbabwe in 2015 when Pakistan started its campaign to win back the confidence of foreign teams and the resumption of international cricket.

Azhar Ali is the most senior cricketer in the Pakistan XI, having played 93 Tests, but is featuring in his first Test in his hometown.