Shaheen Shah Afridi (L) bowls, Nathan Lyon is bowled out off Naseem Shah (R) during the second day of the Test match at the Gaddafi Cricket Stadium in Lahore on Tuesday. AP / AFP

Pace spearheads Naseem Shah and Shaheen Shah Afridi knocked over eight wickets and restricted Australia to 391 before Pakistan ended day two of the deciding Test at 90-1 in Lahore on Tuesday.

The duo led a late reverse-swing charge to close the second session as Australia lost their last five wickets for 71 runs having reached a commanding 320-5 at lunch. Naseem finished with figures of 4-58 and Shaheen 4-79.

At stumps, the game was evenly poised and the series hanging in the balance as Abdullah Shafique, 45, and Azhar Ali, 30, returned to the pavilion five overs early due to bad light.

The series is tied at 0-0 after the first two Tests in Rawalpindi and Karachi ended in high-scoring draws. 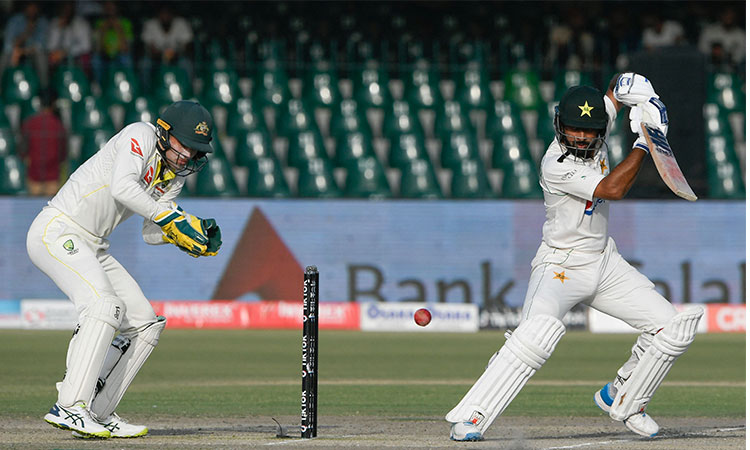 Abdullah Shafique plays a shot during the second day of the final Test match in Lahore. AFP

Shafique and Azhar had to rebuild after Pakistan opener Imam-ul Haq was trapped leg-before by Australian skipper Pat Cummins on 11. But the pair looked untroubled, putting on 70 for the second wicket.

Azhar survived a stumping scare while batting on 14 but the review showed his foot was planted well inside the crease after he was beaten by a well-flighted delivery from spinner Mitchell Swepson.

Before Naseem and Shaheen brought Pakistan back into the game, Cameron Green, 79, and Alex Carey, 67, had frustrated the hosts in the morning session, adding an invaluable 135 for the sixth wicket.

Fortunes turned after spinner Nauman Ali had Carey leg-before in the fourth over after the break.

The wicketkeeper-batsman had hit seven boundaries in his 175-minute knock.

Green was then bowled by Naseem after a resolute 223-minute stay intermittently lit up by nine boundaries.

“He bowled really well all day,” Green said of the 19-year-old Pakistani pacer. “He was getting the ball to reverse pretty largely both ways. Unfortunately just lack of concentration when you’ve been batting out there for a while,” he said. “I thought I saw the ball go away from me but it came back in. That’s kind of what you face over here.” 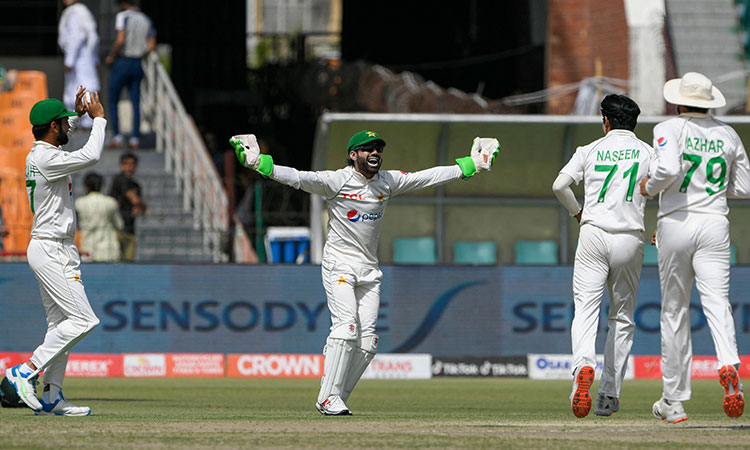 Pakistan were looking to make early inroads at the start of play with the second new ball only five overs in. But Australia, who resumed at 232-5, took advantage of a placid Gaddafi Stadium pitch to bat through 28 overs unscathed.

Pakistan thought they had removed Carey for 27 when umpire Aleem Dar gave him out caught behind off fast bowler Hasan Ali but the Australian reviewed straight away.

The replay showed he had missed the ball, which had also not carried to wicketkeeper Mohammad Rizwan.

Carey took full advantage of his reprieve by smashing spinner Sajid Khan for two boundaries before reaching his third Test fifty with a single.

Shaheen described the pitch as “really good for batting” and that the bowlers needed to remain patient.

“We tried to bowl the right areas and in partnership so after they had a good stand we got the breakthrough and got success,” he said.

“We have got a good start to our batting, so we need to take the total to 450-500 and then bowl our team to success.”

Australia are on their first tour of Pakistan since 1998, having previously refused to tour the country over security fears.

UAE is committed to enhance sustainability of planet: Minister