Several Pakistani cricketers, including Ahmad Shahzad and Shahid Afridi, among others have expressed their displeasure over Australian all-rounder James Faulkner leaving the Pakistan Super League (PSL) abruptly alleging that the Pakistan Cricket Board (PCB) did not honour his “contractual agreements/payments.”

The 31-year-old had taken to Twitter and revealed that the PCB has “continued to lie” to him and that the treatment he received from the board and the PSL was a “disgrace.”

One of Pakistan’s best-known cricketers, Shahid Afridi said on Sunday that he was “disappointed” with Faulkner levelling “baseless allegations” against the PSL and PCB. 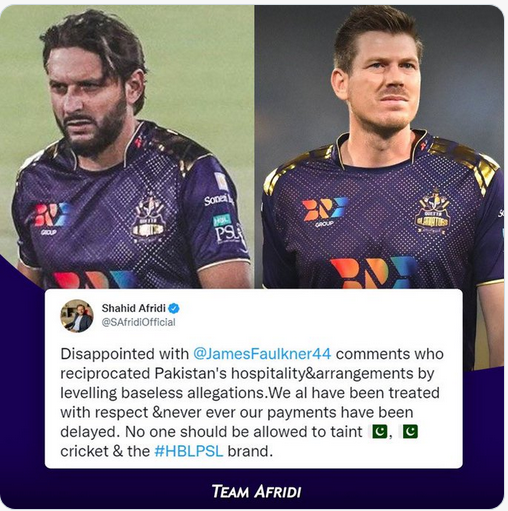 “Disappointed with @JamesFaulkner44 comments who reciprocated Pakistan’s hospitality and arrangements by levelling baseless allegations. We all have been treated with respect and never ever our payments have been delayed. No one should be allowed to taint Pakistan cricket and the PSL brand,” tweeted Afridi.

Faulkner, who represented Quetta Gladiators in the PSL, had tweeted his grudge on Saturday, saying, “I apologise to the Pakistan cricket fans, but unfortunately, I have had to withdraw from the last two matches and leave the PSL due to the @TheRealPCB not honouring my contractual agreement/payments. I’ve been here the whole duration and they have continued to lie to me.

“It hurts to leave as I wanted to help get international cricket back in Pakistan as there is so much young talent and the fans are amazing. But the treatment I have received has been a disgrace from the @TheRealPCB and @thePSLt20. I’m sure you all understand my position,” he added in another tweet. 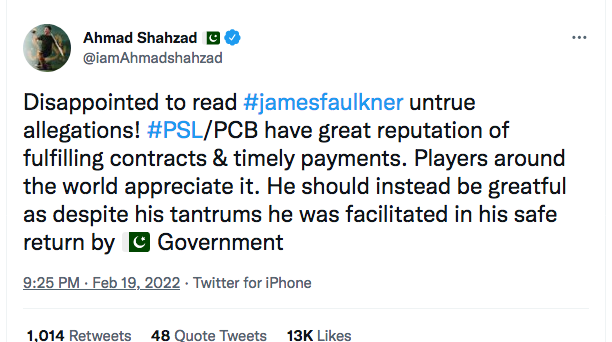 Another Pakistani cricketer Ahmad Shahzad tweeted, “Disappointed to read #jamesfaulkner untrue allegations! #PSL/PCB have great reputation of fulfilling contracts and timely payments. Players around the world appreciate it. He should instead be grateful as despite his tantrums he was facilitated in his safe return by Pakistan Government.”

PCB has issued a statement denying Faulkner’s allegations and banned him from competing in the PSL for life. 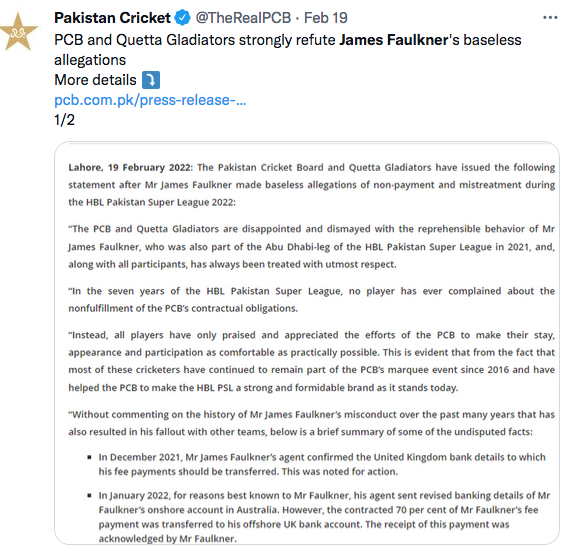 The PCB also claimed that Faulkner, before his departure, had caused deliberate damage to property at the hotel he was staying at and that the board had to pay for the damages. It stated that it also received reports and complaints from immigration authorities that Faulkner’s behaviour at the airport was inappropriate and abusive.