In this combo photo, Arshad Nadeem competes, celebrates and reacts during the medal ceremony for the men’s javelin throw athletics event at the Alexander Stadium early on Monday. AFP / Reuters / AP

Pakistan’s star javelin thrower Arshad Nadeem created history as he became the first South Asian to cross the 90.18-metre barrier in the sport and the first ever Pakistani to claim the athletics gold medal at the Commonwealth Games in Birmingham early on Monday. Nadeem made history in his fifth attempt right after Peters equalised his lead of 88.0m.

His performance, while also being injured, is being hailed by politicians, celebrities and netizens who won’t mind handing him another gold medal for bringing the title home.

Nadeem is the second Pakistani to win a gold medal at the Commonwealth Games after Nooh Dasagir Butt smashed the weightlifting record on Aug.4. Shah Hussain won a bronze in judo the same day.

Nadeem thanked the entire nation for praying for his success. “Due to prayers of the nation, Allah (God) has rewarded me a gold medal,” he said. Nadeem said that despite elbow and knee injuries, he was very happy for winning the gold medal. “However, I thanked my physicians who had worked with me during my training.” 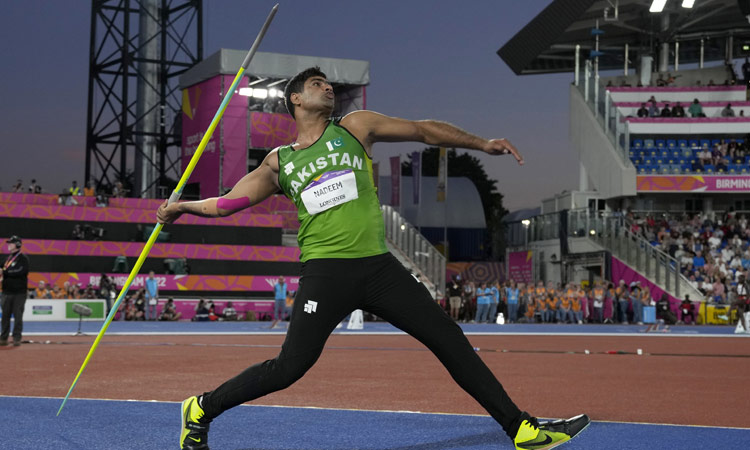 Arshad Nadeem makes an attempt in the Men’s javelin throw at the Commonwealth Games. AP

The star athlete also thanked Pakistan Sports Board (PSB) for providing him with facilities. Nadeem also missed India’s Neeraj Chopra, who was not part of the competition due to an injury.

The gold delivered in record-smashing style, a 56-year medal drought in track and field for Pakistan at the Commonwealth Games ended, Nadeem sank to his knees and prostrated. 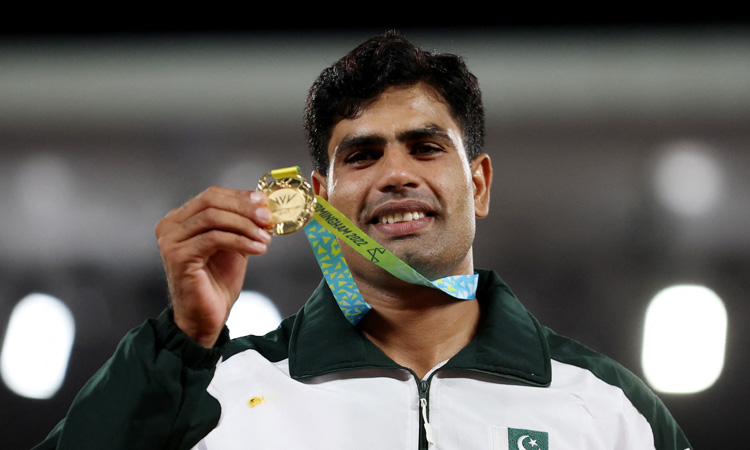 Achieving that distance in his fifth throw, he came on top in a field that included world champion Anderson Peters, former Olympic champion Keshorn Walcott and former Commonwealth and world champion Julius Yego.

That brought Pakistan’s first athletics medal at the Games since 1966 and a first javelin gold for the country since Mohammad Nawaz finished top of the podium at the inaugural edition of the quadrennial multi-sport spectacle in 1954.

During the first round of the javelin throw final, Nadeem created a record through an 86.81-metre throw. A foul on his second attempt didn’t matter as Nadeem improved his personal best again with a throw of exactly 88m.

Soon Nadeem started receiving congratulations from all the quarters after his historic record-breaking win and started trending top on twitter in Pakistan. 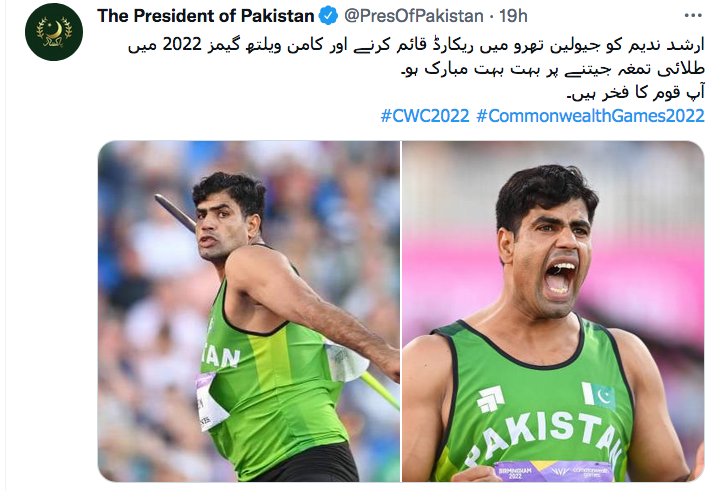 President Dr Arif Alvi led the tributes paid to the athlete for his historic win. “Congratulations Arshad Nadeem on making history in Javelin throw and winning Gold Medal in the 2022 Commonwealth Games. Nation is proud of you.” 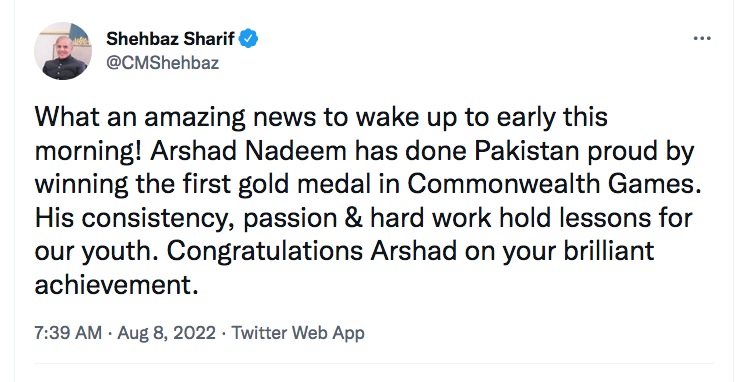 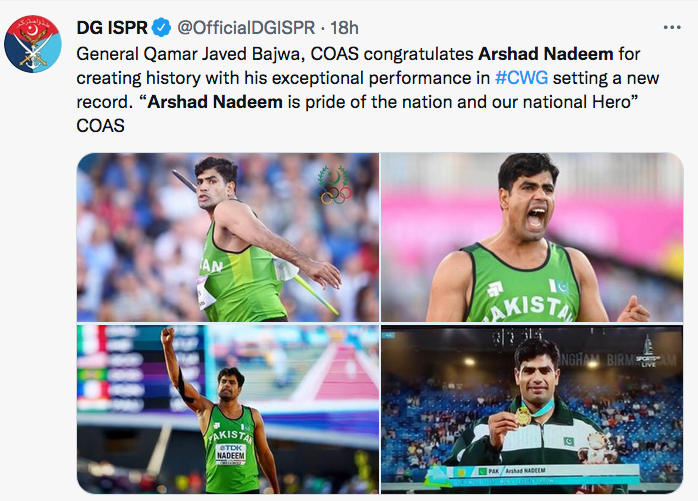 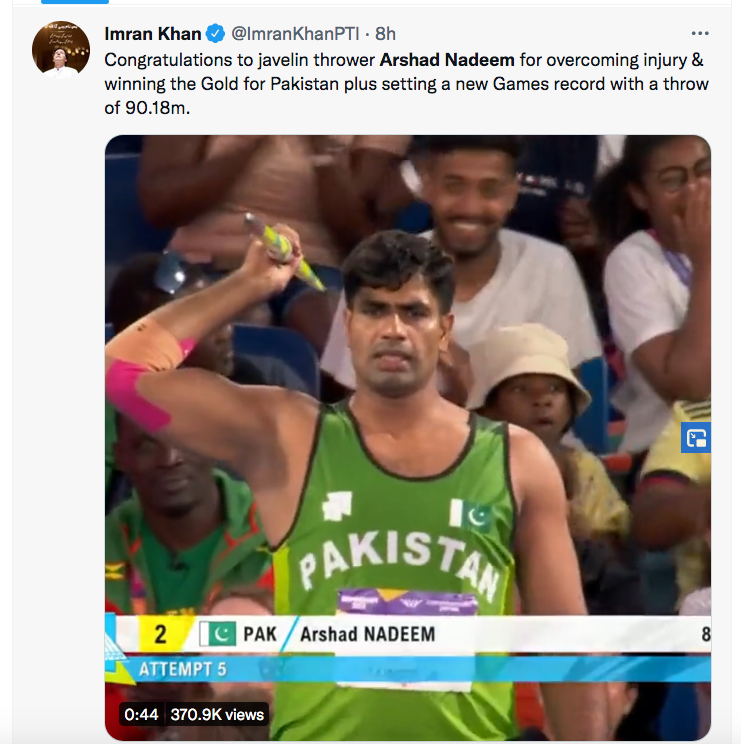 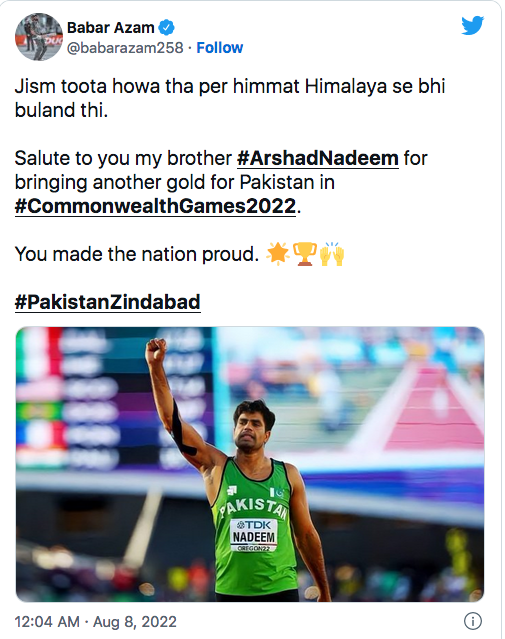 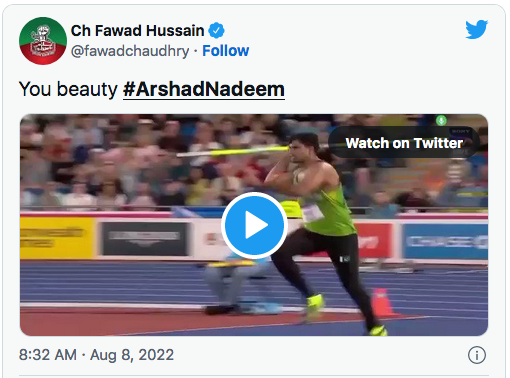 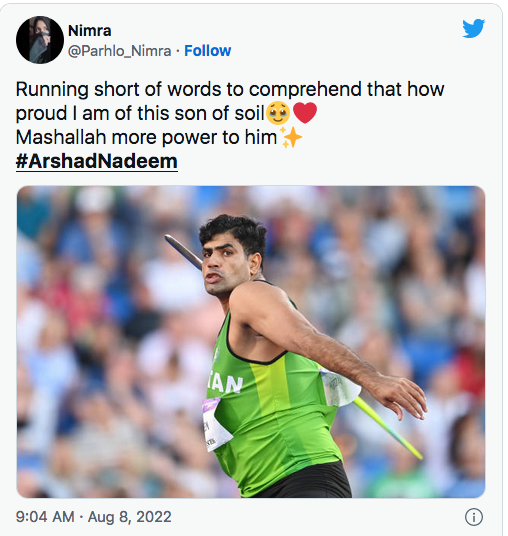 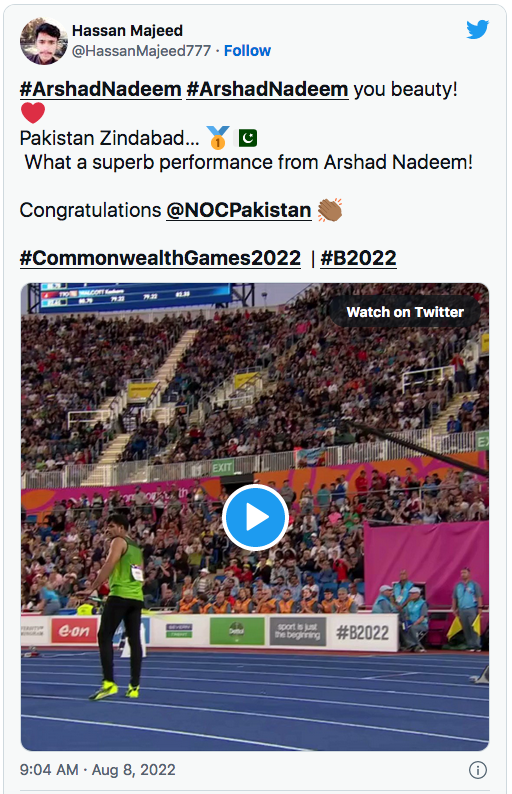 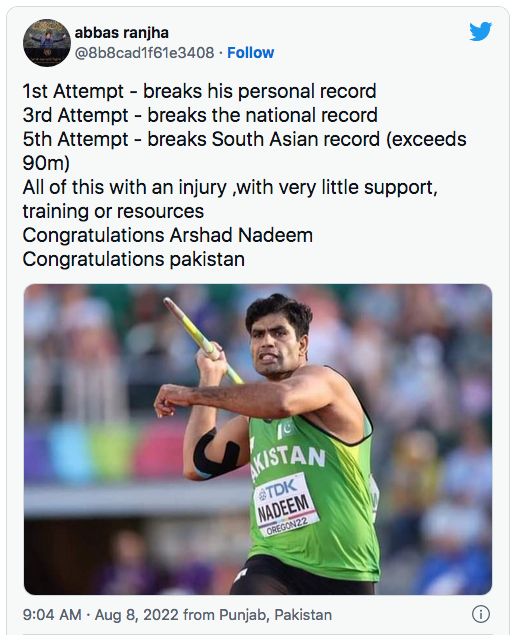 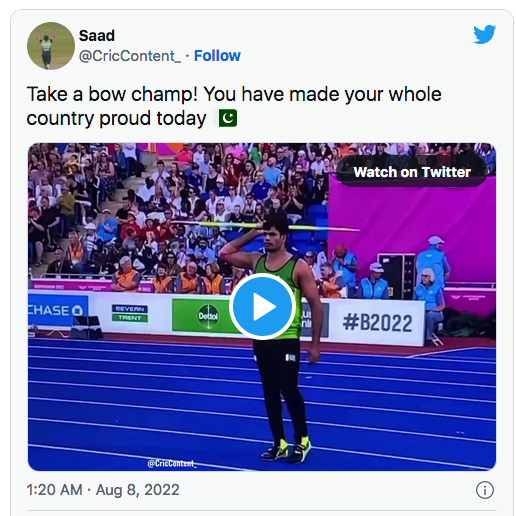