Glenn Phillips hit the second century of the Twenty20 World Cup to put New Zealand on course for a semi-final place with a comprehensive 65-run win over Sri Lanka at the Sydney Cricket Ground on Saturday.

The Kiwis now have five points, having won two games and shared the points with Afghanistan following a rain-affected Group 1 match at the Super 12 stage.

England, Ireland and Australia are tied on three points but New Zealand has a vastly superior net run-rate.

The New Zealanders started off shakily, losing three wickets in the powerplay, but Phillips dug them out of a hole.

Pathum Nissanka dropped an easy chance when Phillips was on 12 and the South African-born batter made the Sri Lankans pay.

Phillips went on to post 104 off 64 deliveries, with 10 fours and four sixes, before being dismissed in the last over.

It was the second hundred of the World Cup following South African Rilee Rossouw’s 109 earlier in the week against Bangladesh at the same venue. 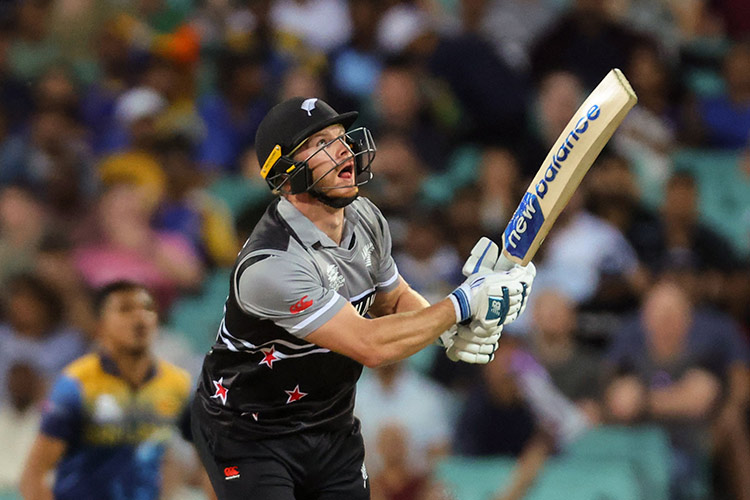 New Zealand’s Glenn Phillips plays a shot during their match against Sri Lanka at the Sydney Cricket Ground in Sydney on Saturday.  AFP

Phillips finished things off in style, making good use of the short square boundaries, as his team scored 65 runs in the last five overs.

Sri Lanka was never in the hunt in its reply after slumping to 8-4 in the fourth over.

Left-arm spinner Mitchell Santner was then introduced in the seventh over and he struck with his first ball by removing Chamika Karunaratne for three.

Skipper Dasun Shanaka top-scored with 35 off 32 deliveries before he was caught in the deep off Trent Boult, who finished with career-best figures of 4-13.

Bhanuka Rajapaksa also made 34 off 22 balls with three fours and two sixes. None of the other batters managed double figures.

It has been an awful campaign for 2014 champion Sri Lanka, which had to qualify for the event after falling down the rankings.

Injuries to key players have left Sri Lanka with a depleted side and it has two points from three games.