GM Arjun Erigaisi (left) ponders a move against GM Alexandr Predke during the seventh round of the Dubai Open Chess Tournament.

Four players share the lead after Friday’s seventh round of the Dubai Open Chess Tournament at the Dubai Chess and Culture Club.

The tournament’s two highest rated players and sixth-round co-leaders GM Alexandr Predke of Russia and GM Arjun Erigaisi of India drew their game, ensuring both players remained in the lead with six points each.

Indian grandmasters R Praggnanandhaa and Aravindh Chithambaram won their matches on the second and third boards to likewise reach six points and complete the four-way tie at the top.

Erigaisi gave Predke a head start on the clock, arriving 10 minutes after the round started and then proceeded to play the Sicilian.

The Russian countered with the Rossolimo Attack, an opening the two grandmasters have had extensive experience with both colours.

Around half a dozen moves later, the position transitioned into a Marocy Bind structure, where white clamps down on black’s primary central breakthrough in the d-file, forcing Erigaisi to find counterplay on the f-file, pushing his pawn two squares to attack white’s e-pawn.

A series of exchanges followed with all minor pieces leaving the board and both players shortly thereafter agreeing to a draw after 31 moves. 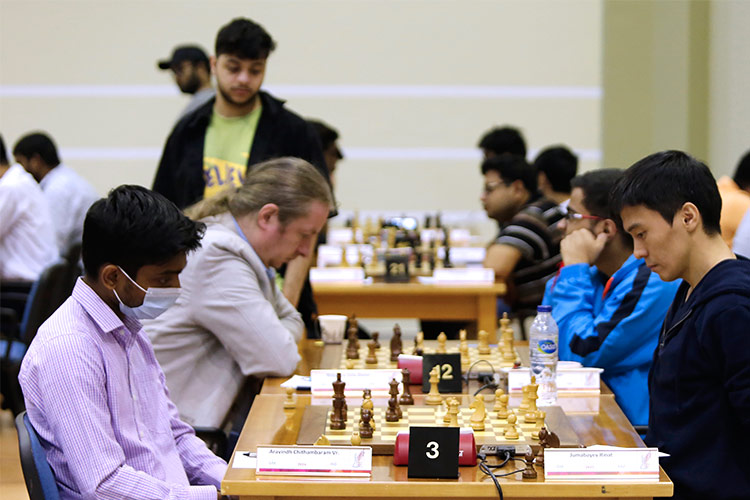 Praggnanandhaa played the Sicilian Sveshnikov and kept up the pressure against the Armenian-American GM Vladimir Akopian and ultimately won after 32 moves of play. Akopian won a pawn late in the game, but it was white’s lingering weakness on f2 that proved the bigger issue. Praggnanandhaa went on to force his way into capturing the f2-pawn, creating unpleasant threats against the white king.

While white still had chances to keep the game going, Praggnanandhaa thought Akopian’s 30th move, Rb5, was already a step in the wrong direction. After white’s 31st move, Ng2, the Indian was already confident he had the game in the pocket.

Indeed, despite equal material on the board, Akopian resigned a move later, with his isolated pawns on a4 and c3 and backward pawn on g3 under threat and his king in a compromised position.

“He had all these weaknesses like c3, a4, g3 – everything was weak,” Praggnanandhaa said, describing the final position.

Playing black, Chithambaram had a big attack and a huge time advantage in a Queen’s Gambit Chigorin Defense against GM Rinat Jumabayev of Kazakhstan, who collapsed in time pressure and sportingly allowed mate on the board.

While Chithambaram blitzed out his moves in the opening and even gained more time in the first dozen moves, Jumabayev was down to barely half an hour by move eight.

The Kazakh burned even more time when Chithambaram sacrificed the exchange for an attack against white’s stranded king in the centre.

“I didn’t want him to think about my time,” Chithambaram, the back-to-back Indian champion in 2018 and 2019, said of his strategy in the game.

At a point when everything seemed lost, Jumabayev’s position did have a way out with the seemingly counterintuitive “computer move” 23.Rcb1, which a surprised Chithambaram says he did not consider.

“It was not an easy move to find with 30 seconds on his clock,” the Indian said.

GM Sahaj Grover was among those in the running for a seat in the lead, but he lost his game on fourth board to Indian compatriot GM S.P. Sethuraman. Grover remains at five points along with Akopian, Jumabayev and 13 other players.

Sethuraman improved to 5.5 points, half a point behind the leaders, along with Armenia’s GM Aram Hakobyan, 2011 Dubai Open champion GM Abhijeet Gupta of India and GM Ahmed Adly of Egypt.

Adly remains the tournament’s top-ranked Arab player after his win over junior Indian player FM Ayush Sharma, who has lost back-to-back after beating three grandmasters in a row, but remains on track for a GM norm with a 2605 rating performance so far.

IM Omran Al Hosani continues to lead among UAE players with four points after agreeing to a draw with IM L R Srihari of India.

Ahmad Al Romaithi improved to 3.5 points after a draw with India’s Ojas Kulkarni, while Ali Abdulaziz upset the much higher-rated WIM Isha Sharma of India to likewise score 3.5 points.