UAE Jiu-Jitsu Federation officials and other dignitaries pose for a picture after the press conference.

The UAE Jiu-Jitsu Federation has announced the completion of preparations for the ‘Jiu-Jitsu Month’ which includes the 14th edition of the Abu Dhabi World Professional Jiu-Jitsu Championship, held under the patronage of His Highness Sheikh Mohamed Bin Zayed Al Nahyan, President of the UAE and the 27th edition of the Jiu-Jitsu World Championship, which is being held under the  patronage of Sheikh Khaled Bin Mohamed bin Zayed Al Nahyan, Member of Abu Dhabi Executive Council and Chairman of Abu Dhabi Executive Office.

More than 7,000 players from over 100 different countries are expected to take to the mats during the championships.

During a conference held at Jiu-Jitsu Arena, officials from the UAEJJF, sponsors, and strategic partners announced the completion of planning and preparations for the historic events as well as the different sporting and entertaining activities happening at the Jiu-Jitsu Arena from October 29 – November 19. 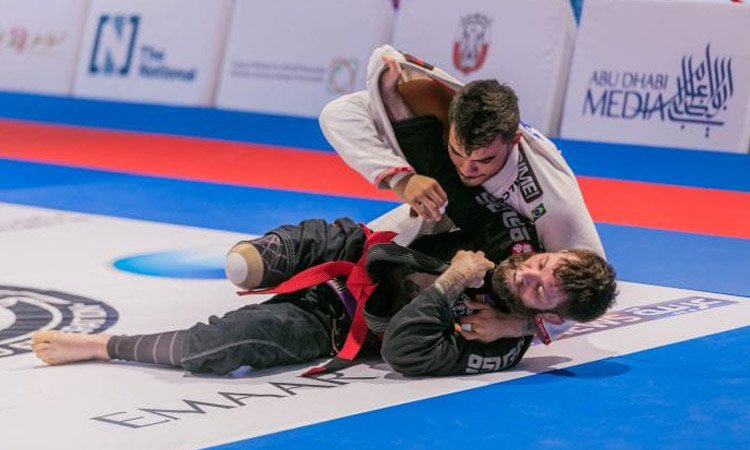 More than 7,000 fighters from over 100 countries will arrive in Abu Dhabi for the 27th Jiu-Jitsu International Federation’s (JJIF) World Championships.

“In the weeks to come, Abu Dhabi will be the centre of attention for the whole jiu-jitsu world as it stages two of the most prestigious championships on the international sporting calendar over a 20-day period,” said Dhaheri, Vice President of the UAE Jiu-Jitsu Federation.

“These world class events confirm the city’s undeniable position as the global capital of jiu-jitsu, as well as its capacity to host major sporting events that dazzle the world.

Dhaheri continued: “Abu Dhabi is ready to receive thousands of players from around the world with the necessary infrastructure in place, including hotels, training centres, transportation, a competition site, and a dedicated staff who will look after them from the time they arrive in Abu Dhabi until they depart the nation.”

“Our UAE National Team heroes are determined to repeat the joy we lived through these past months including the World Games in Birmingham.”

Dhaheri expressed his gratitude to the UAEJJF’s partners, sponsors, and media representatives for their ongoing support while staging the most prestigious international competitions.

Thumfart appreciated the UAEJJF for hosting the championship for the third year in a row.

“We are proud to host the championship in Abu Dhabi for a third consecutive year. With its top-notch infrastructure and sporting facilities, the city has been extremely welcoming and encouraging of international players. The championship’s previous two editions were a huge success, and there was an overwhelmingly positive response to the events,” he said.

“I want to applaud the UAE Jiu-Jitsu Federation for its efforts in promoting jiu-jitsu and expanding the number of practitioners by creating effective plans and strategies, which help to reaffirm the UAE’s reputation as a worldwide promoter of jiu-jitsu.”

Fazari added: “Hosting the jiu-jitsu month marks a turning point in Abu Dhabi’s calendar of major international events and demonstrates the emirate’s potential for hosting important competitions. Abu Dhabi has become a preferred location for professionals and champions. We are proud to launch the new Fitness District at the Arena which has  a dedicated fitness area that will play host to a variety of activations.”

Saffar concluded: “Major sporting events such as this help to solidify Abu Dhabi’s status as a major global sports hub, and we are always happy to support. Jiu-jitsu stands for the ideals of harmony, cooperation, and fair competition, and the UAE Jiu-Jitsu Federation is a leading example of professionalism and teamwork.”

“Supporting local and national sporting events in Abu Dhabi and across the UAE helps to enhance awareness of the sport and encourages residents to participate, leading eventually to an active lifestyle.