A supporter wearing a mask depicting Diego Maradona poses for pictures before the Qatar 2022 World Cup Group C match between Argentina and Saudi Arabia at the Lusail Stadium, north of Doha. AFP

Javier Maluf will quietly put on a shirt worn by Diego Maradona against England, but other fans at the World Cup have more noisy plans for Friday’s second anniversary of the death of the flawed genius.

Argentina’s legion of supporters may also be praying to the sporting gods that the late football great can still inspire his country to victory over Mexico on Saturday to keep their hopes in Qatar alive.

Maluf is like many Argentina fans who have never fully recovered from Maradona’s death from a heart attack at the age of 60.

The shirt that Maradona wore during a game against England at Wembley in 1980 is the prized item in Maluf’s collection of 1,000 game-worn football jerseys that he estimates is worth $1 million.

“I will put it on for a while as a sign of respect,” he told AFP at his Doha home, where the shirts and other souvenirs are kept. “We all know his story but we all know his impact on the game.”

A respected memorabilia sleuth, Maluf, 56, also has a blood-stained Argentina shirt worn by Mario Kempes in a 1978 World Cup game against France. 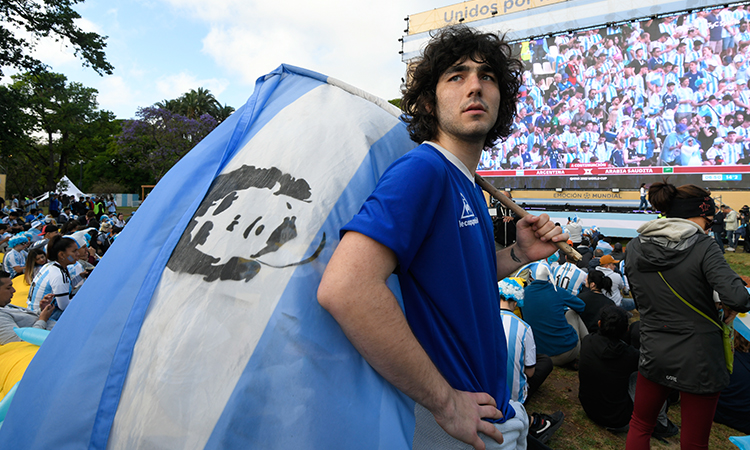 An Argentina soccer fan holds a Maradona flag while watching the national team lose to Saudi Arabia at a World Cup Group C match, played on a large screen in Buenos Aires. AP

That is folded near a River Plate shirt worn in 1931 by Carlos Peucelle, who played in the first World Cup a year earlier. Memorabilia is now big business, with Maradona items much sought after.

In May, a shirt worn by the Argentina forward when he scored his infamous 1986 World Cup “Hand of God” goal against England sold at auction for $9.3 million.

The ball that he fisted into the England net sold this month for £2 million ($2.4 million).

The shirt is on display at the 3-2-1 Qatar Olympic and Sports Museum during the World Cup but Maluf is among fans who believe that it belongs in Argentina.

“It would be good if it goes to Argentina one day, so that all the public can see it and feel the importance,” he said.

More than 30,000 Argentina fans are in Qatar for this year’s tournament and while many worship current number 10 Lionel Messi, Maradona’s name still carries an almost mystical force.

Many have been on a pilgrimage to a giant Maradona mural near the Khalifa stadium in Doha.

At Argentina’s first game — a shock 2-1 defeat by Saudi Arabia — there were Maradona masks, banners and shirts on display in the stadium.

And aficionados say there will be many public tributes to Maradona on Friday. One group plans a march to the Maradona FanFest at Doha’s international airport.

The main attraction there is a hologram of the player plus a “tribute jet” bearing images of Maradona that will be auctioned, with a chunk of the proceeds going to charity.

Gonzalo, a 32-year-old Buenos Aires lawyer, recalled the shock of finding out about Maradona’s death.

“I was on the beach, my girlfriend told me and I said we had to grab our things and go straight back to Buenos Aires.” They were among thousands who waited outside Maradona’s house.

Claudio carried a flag showing Maradona embracing Messi, which will be seen again when Argentina take on Mexico.

Laura Valero, who borrowed $8,000 to make the trip to Qatar, said she was “recovering” from the defeat. “I will be wearing a Maradona shirt because you have to believe in something,” she said of the looming anniversary and game.