Rishabh Pant said on Wednesday he will make the most of his unexpected chance to captain India after KL Rahul was ruled out to injury on the eve of the Twenty20 series against South Africa.

Rahul was appointed captain of the team after all-format skipper Rohit Sharma and superstar Virat Kohli took a break when the Indian Premier League (IPL) wrapped up, but he has now been sidelined by a groin injury.

Hardik Pandya, who last month led Gujarat Titans to IPL triumph in their opening season, has been named vice-captain.

Left-arm wrist spinner Kuldeep Yadav will also be absent after getting hit on his right hand while batting in the nets on Tuesday. Both he and Rahul will be sent to the National Cricket Academy for medical examination, the Board of Control for Cricket in India said. 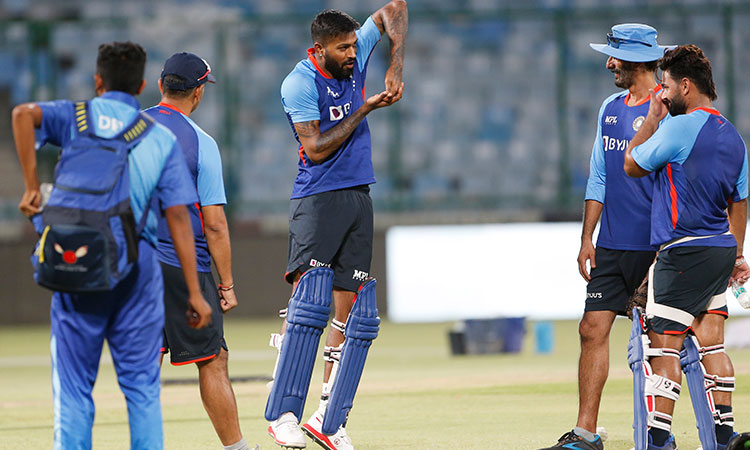 Hardik Pandya attends a training session ahead of the first T20 match in New Delhi. AP

Pant, a wicketkeeper-batsman who leads Delhi Capitals in the IPL, will take charge in his place for the five-match series, which begins Thursday in New Delhi.

“It’s a great feeling, especially getting an opportunity like this in your hometown, (no) bigger opportunity than that and I will make the most of it,” the 24-year-old told reporters.

Pant added that his performance would be bolstered by the experience of leading Delhi. “It will help me a lot because when you keep on doing the same thing over a period of time you tend to improve,” he said. “I am someone who keeps learning from my mistakes, and I think that’s what is going to help me in the coming days.”

Pant said India have set their sights on the T20 World Cup later this year and will soon unleash a new style of cricket. “I think as a team we have thought about certain goals which we want to achieve,” he said. “In the coming days you will see a lot of changes in the way we play.”

Pant is ready to grind it out in the Delhi heat with searing summer temperatures soaring to 43˚C this week. “I think this is the first time we are playing in these kind of conditions after a long time but I think the heat will play its part,” he said.

“We might get dehydrated, we might get tired earlier but I think it’s part and parcel of the game. We just have to keep improving, not think about the heat.”

Pant was identified as a future leader alongside Rahul and Jasprit Bumrah after Kohli stood down from the captaincy. He has played 30 Tests, 24 one-day and 43 Twenty20 matches for India since his debut in 2017.

Last month, Delhi coach Ricky Ponting and Mumbai Indians skipper Rohit backed Pant’s leadership skills despite blunders from the glovesman that cost the team a place in the IPL playoffs.

Meanwhile, South Africa are bracing for a formidable bowling attack from an Indian side eager to prove themselves in Twenty20 series, skipper Temba Bavuma said on Wednesday.

The touring side will play the first of five matches on Thursday as focus remains on the short format ahead of this year’s T20 World Cup.

India have traditionally relied on their spinners on home turf but up-and-coming pace bowlers Avesh Khan and uncapped Umran Malik have kept up the country’s fast bowling stocks. “It has definitely changed our preparation,” Bavuma told reporters.

“They have got their quick bowlers and their spinners as well. In terms of preparation, the focus has not just been on spin but also to make sure that we cover our bases from a fast bowling point of view.”

Senior quicks Jasprit Bumrah and Mohammed Shami have been rested for the series which could see Malik, whose bowling consistently clocked over 150 kilometres per hour in the Indian Premier League, make his international debut.