Portugal and S.Korea’s supporters cheer before the start of the Qatar 2022 World Cup Group H match at the Education City Stadium in Al Rayyan, Doha, on Friday. AFP / Reuters / AP

Cristiano Ronaldo starts for a much-changed Portugal against South Korea on Friday as they look to seal top spot in World Cup Group H.

Ronaldo, who scored against Ghana in Portugal’s opening game to become the only player to have netted in five World Cups, had missed training on Wednesday.

Coach Fernando Santos made six changes from the team that beat Uruguay to clinch qualification for the knock-outs, with Bruno Fernandes, Bernardo Silva and Joao Felix among those rested. 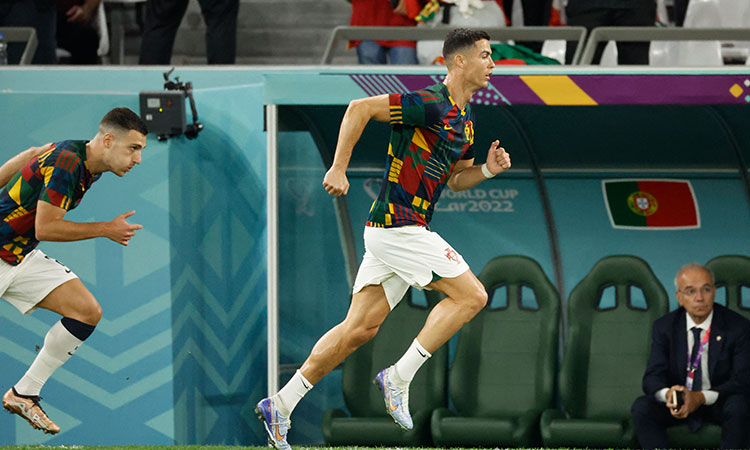 Cristiano Ronaldo during the warm up before the match against South Korea in Doha. Reuters

Portugal need just a point against South Korea to clinch top spot, while the Asian side have to win and hope the result in Ghana’s clash with Uruguay goes their way too.

Tottenham forward Son Heung-Min captains the Koreans, still in search of his first goal at the tournament.
Napoli centre-back Kim Min-jae is on the bench having suffered with a calf injury at the tournament, while dynamic Mallorca winger Lee Kang-in starts, as one of three changes.

Deal to boost incentives and support for industrial sector