Senegal’s players celebrate with the trophy after winning the Africa Cup of Nations at Stade d’Olembe in Yaounde on Sunday. AFP

Sall, who had been due to visit Comoros at the end of a trip that took in Egypt and Ethiopia, cancelled the last leg in order to welcome the triumphant Lions on their return to Dakar at 1300 GMT Monday, RTS said.

After two previous final defeats in 2002 and 2019, Senegal finally claimed their first Cup of Nations title.

The Lions will be decorated by Sall on Tuesday at the presidential palace in Dakar, RTS television said.

“The president of the republic declared Monday a public holiday, a paid day off, following the brilliant victory of the Lions,” RTS said, citing a presidential decree. 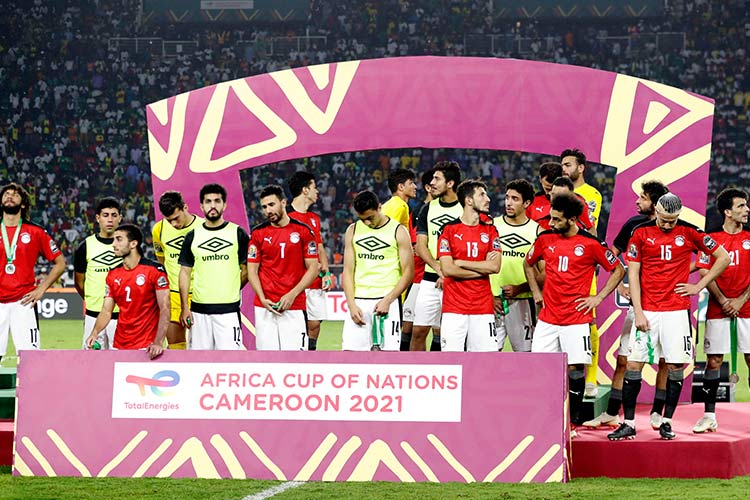 Egypt’s Mohamed Salah with teammates look dejected after losing the Africa Cup of Nations at Stade d’Olembe in Yaounde. Reuters

Sadio Mané finally delivered a first African Cup for Senegal, and Liverpool teammate Mohamed Salah could do nothing about it but stand and watch.

Mané drilled the decisive penalty in a shootout into the bottom left corner to beat Salah and Egypt in Sunday’s final in Cameroon and make up for missing a penalty early in the game.

Senegal won the shootout 4-2 after it ended 0-0 after extra time. Salah, who was supposed to be his team’s final penalty taker, didn’t get a say in the shootout after two of his teammates missed.

Senegal had lost two finals previously, including against Algeria at the last African Cup of Nations in Egypt in 2019, when Mané was left inconsolable.

This time Mané provided the winning moment. He raced off to joyously celebrate with teammates but also returned to spend some time consoling Salah, who was in tears.